What’s the difference between DUI and DWI?

by Vince Peterson Posted on October 14, 2012 in
Alcohol Industry

Many citizens and even some writers in the field of alcohol studies often use the two acronyms, DUI and DWI indiscriminately.

DUI (driving under the influence) is the global term that covers all automobile drivers who have recently used alcohol (or perhaps still are in the process of using alcohol). The number and quantity of the alcohol beverages is not particularly relevant. Occasionally, this term is also often used when other drugs such as marijuana are involved.

DWI (driving while intoxicated) is a more specific term, particularly geared to the legal terminology of what consumption rate of alcohol is necessary to have a person be judged intoxicated. In the United States, this limit has been legally set where the subject must have a Blood Alcohol Concentration (BAC) of 0.08 or higher.

The way that these terms are used by the alcohol industry is noteworthy. The industry focuses on the DWI figures almost exclusively in their news releases, etc. For example, whenever there is a reduction in fatalities caused by DWI subjects from one year to the next, the industry publicly attributes the downtick to the industries various examples of its “Drink Responsible” message without giving any data to back up the claim – and ignores all of the DUI fatalities involving drivers with a BAC of under 0.08.

The fact is that the DWI fatality rate has held pretty steadily for the past decade at about 32% of the total fatality rate of all automobile crashes.

On the other hand, while it is true that the overall number of automobile fatalities has been declining, the decline is due more to vastly improved design and production of upgraded automobiles, collapsible steering wheels, multiple air bags and seat belts, etc. Also, improved police surveillance and the fact that 15 states already have drunk driver ignition interlock systems have also been instrumental in reducing auto fatalities.

What perhaps is most important, however, is to consider all of the fatalities caused by people who were DUI (and possibly also DWI). Here again, in this bigger picture, we find that the alcohol industries claims of any success are frivolous at best.

A person does not have to be legally drunk to kill someone else while driving. For example, he may have a BAC of say, 0.07. When the total DUI population is considered, in 2009 the number of alcohol related fatalities was 12,744, while when only considering DWI cases, the number was just over 10,839. And the total alcohol related fatalities were holding rather steadily over the last decade at a level of 40.6 as a percentage of the total fatalities in 2010. 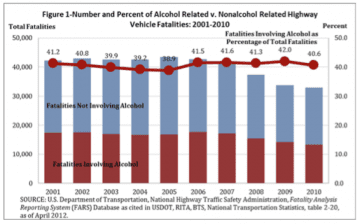 Get to know Vince

Other recent posts by Vince Peterson