The burden of informal brews on African women

The African woman has many roles in society and her home. The weight of looking after her family is laid squarely on her shoulders. Her world has been made tougher in recent years and all due to the production of informal brews.

The African woman has many roles in society and her home. She is the breadwinner, child bearer, child rearer, farmer, cook, counselor, nurse sometimes even the livestock herder.

The weight of looking after her family is laid squarely on her shoulders. Her world has been made tougher in recent years and all due to the production of informal brews. These brews are causing her spouse, children, extended family and community to become idle unproductive citizens.

Informal alcohol has permeated East Africa and has become a hindrance for growth and development. Informal alcohol brewers use maize, millet, sorghum, these make up the staple food source in East Africa. Thus for subsistence farmers who are usually women, instead of storing their harvests for future consumption, it is sold to informal brewers and the funds quickly depleted by their husbands who use it for purchasing informal alcohol. Sugar is another key ingredient for making informal alcohol and quite recently in Burundi, there was a sugar shortage caused by the demand from informal brewers. This leads to women brewing and selling alcohol in order to feed their families because there is a ready market for these brews. Resulting in a vicious cycle such that it is quite a task to make them stop producing this type of brew and trying to get women out of this cycle takes time and a lot of convincing.

So far the only country that has managed to systematically reduce the number of informal brewers has been Kenya by utilizing the Alcohol law of 2010. 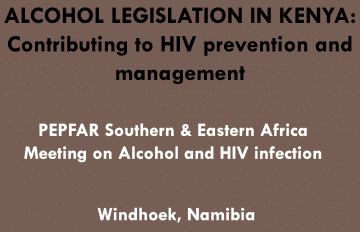 This law is now facing a lot of criticism from both informal and formal alcohol industry. Civil society organizations in Kenya are lobbying to keep the law and have it better implemented. The rest of East Africa does not have such a law or policy and it is therefore imperative that Burundi, Rwanda Tanzania and Uganda formulate and implement alcohol policies in order for the production of informal alcohol in the region to decrease.

Informal alcohol is cheap and lethal; there is no formula to make it and therefore brewers add whatever ingredients they deem fit. The informal producers add poisons like formaldehyde, methane or ether alcohol to make their products more potent and therefore fatal. They have even gone as far as using ARVs to their concoctions. One needs to watch the video entitled “Sisters of Death” to see how far the brewers go in enhancing their products.

There have been a lot of cases of men who have gone blind or died from consuming “fortified” brews in East Africa. The ones who bear the brunt of such informal alcohol disasters are women. It is thus very crucial to have alcohol policies put into operation in the other 4 countries in East Africa because of the toxicity of the informal brews.

Women are also left with the burden of looking after their families when the husbands are blinded or are dead. The potency of informal alcohol is very high and users do get involved in accidents and women have to care for their husbands after they hurt themselves when under the influence of alcohol, nurse themselves and their children after they have been beaten by their intoxicated partners. They end up walking long distances to obtain treatment in remote villages.

Women can also be infected by HIV/AIDS by spouses who strayed under the influence of these brews. When spouses die from AIDS or are maimed from alcohol related accidents, the women are left to fend for themselves and their families.

East Africa being located so close to the Equator has been well known for its lush vegetation and dense forests. However due to a need for cheap fuel for domestic use, the vegetation especially trees is being depleted at an alarming rate. One needs to drive just outside the main urban centers to see the calamity that is going on in terms of desertification caused by charcoal production. Informal alcohol has been the main cause of this because charcoal is cheap and there being a ready market for it, the makers produce it by the truck loads. Women have to walk for miles further just to find firewood to make daily meals for their families. The more alcohol the informal alcohol sector produces, the harder women have to work to find fuel for domestic use. Water is a precious resource for rural women and the amount of water that is expended to produce this informal alcohol is quite substantial especially in semi-arid areas, the informal alcohol production takes away from the water that should be used for family consumption, watering a vegetable garden and for livestock. The burden of finding water is once again placed on women when the water sources dry up.

The importance of enacting Alcohol Policies to restrict production of such informal alcohol products and to prevent an increase in formal alcohol use is thus the mainstay of our advocacy and lobbying work. Civil society organisation can do this by banding together so that their voices can be heard by parliaments for action to start. The road ahead is tough but a journey starts with a single step. FTW!

A powerful article in The Independent on the contexts of illicit alcohol use in Sub-saharan Africa.

And the UNODC World Drug Report 2012, as PDF

One comment on “The burden of informal brews on African women”