EU Budget Talks and the Need For Keeping Figures in Perspective

by Maik Dünnbier Posted on February 8, 2013 in
Policy, Prevention

When I woke up today, and took a look at the headlines in major newspapers, I could read about late night marathon summit sessions of European leaders. I could read about Mr. Cameron insisting on one thing and Mr. Hollande not agreeing with another issue and about group-building (not team-building) to box through benefits and advantages for some countries. In short I got a taste of EU diplomacy in the 21st century.

And I also got the chance to train my mathematical understanding. The numbers that came up and that are coming up are somewhat beyond my understanding. I don’t know what you can buy for the money of all the rescue packages, or the CAP budget and surely I have no imagination of what the new proposed EU budget of €908.4 billion in spending over the years 2014-2020 means. I can’t imagine how much money that is. Can you?

The same feeling of weird puzzlement I have whenever I am faced with the amount of money we in Europe pay, together, annually, for the costs of alcohol harm: €156 billion.

And that’s why I felt that in these times of budget scrambling, where many claim the EU needs austerity and many others claim the EU needs investment, for example into children and young people, in these times it’s interesting to put the costs of alcohol harm into perspective with the figures of the budget that is being proposed by European governments as they continue their summit scramble. 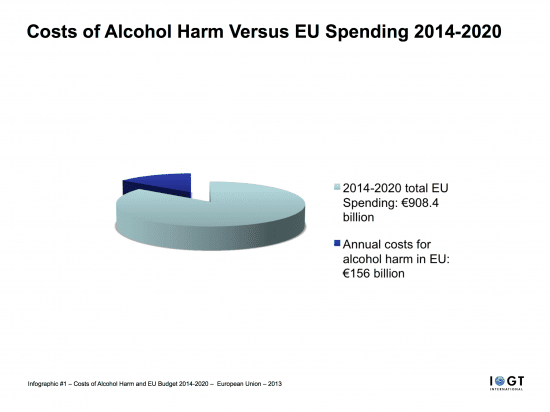 This one is a simple infographic introducing the two figures that while trying to imagine today made my mind boggle. The proposal for the new 7-year budget tabled by European Council President Van Rompuy contains a budget cap at €960 billion, which means the EU will be able to spend the amount of €908.4 billion in the years 2014-2020.

In relation to that one can clearly see how huge the figure of costs due to alcohol use in the EU is.

The difference is obviously that those accumulated, tangible costs are being payed not by the EU as such but by the taxpayers in every member state. Also the total EU budget proposed now amounts to just 1% of the entire EU’s gross national income. And still the infographic shows that the harm caused by alcohol is quite immense in relation to the spending the EU is able to do over 7 years.

In a second infographic I felt the need to compare those figures on an annual level. 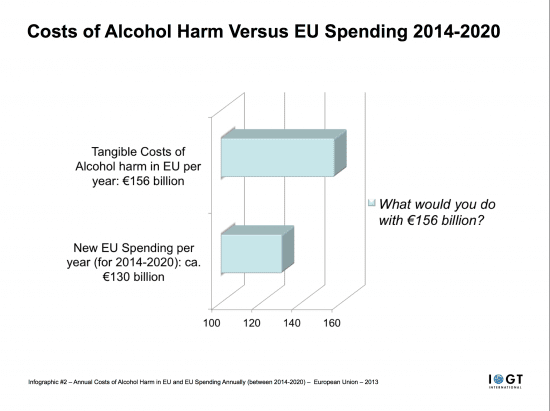 As the Amphora Project has shown last autumn, the costs of alcohol harm are €156 billion per year. You get a perspective of that amount, when you look at the figure that the EU will be able to spend in case the suggested budget is approved. The EU, mainly the European Commission, is only able to spend ca. €130 billion. In 2011, in fact, the EU spend €129.3 billion, as you can see in this overview from the European Parliament. 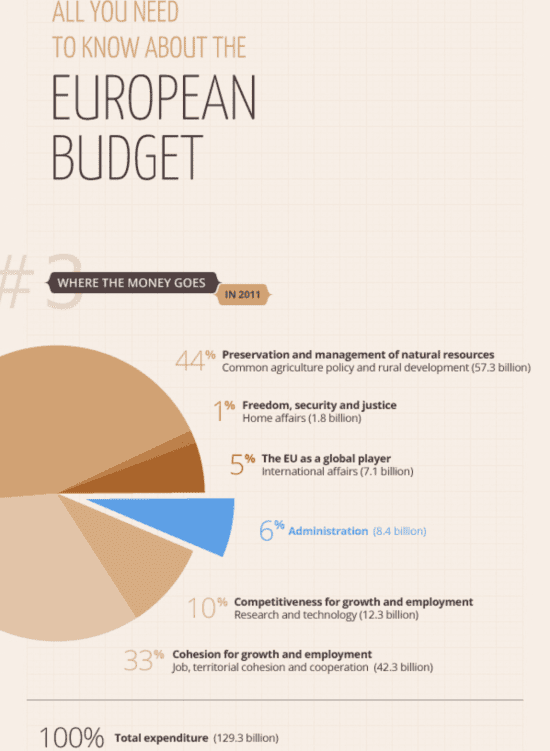 It will be very interesting to set the costs of alcohol in the EU in relation to the different sector that the EU spends money on – once the new budget is adopted. But I think it’s obvious that member states could be able to invest more into global development aid, or into youth and children if they would cut down on the costs of alcohol harm. Lack of political will costs money.

And this truth is shown by the last infographic, too. 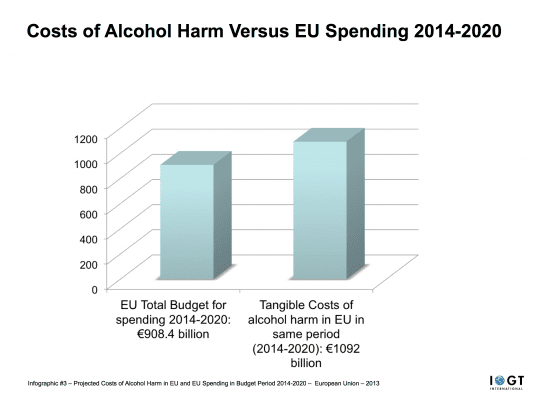 The question is: What would you do with €156 billion every year or with €1092 billion over seven years?

Media reporting on the on-going summit: