by Sven-Olov Carlsson Posted on February 11, 2013 in
Policy, Prevention

We are submitting this public Statement of Concern to the WHO Secretariat in response to the activities of the global alcohol producers. Based on their lack of support for effective alcohol policies, misinterpretation of the Global Strategy’s provisions, and their lobbying against effective public health measures, we believe that the alcohol industry’s inappropriate commitments must be met with a united response from global health community…

I have been deeply involved in the drafting of the Statement of Concern since the Amphora Conference, the 5th European Alcohol Policy Conference, last October in Stockholm.

The WHO Global Alcohol Strategy is a major success by the world community in addressing alcohol harm and in putting forward policy tools that are cost-effective and high in impact when it comes to preventing alcohol harm and reducing the tremendous costs of alcohol around the world. A great example is the Guiding Principle g) which says:

“Children, teenagers and adults who choose not to drink alcohol beverages have the right to be supported in their non-drinking behaviour and protected from pressures to drink.” 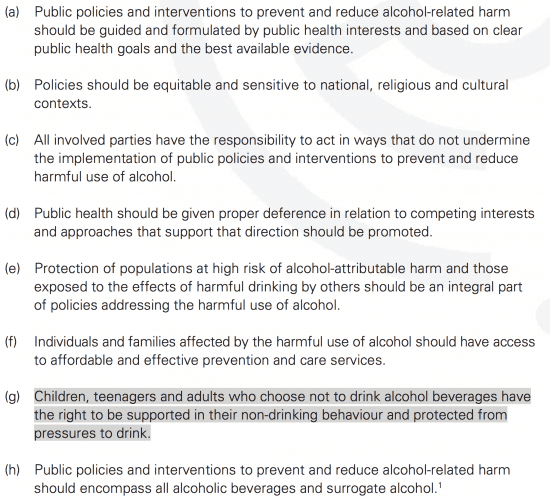 This is – as you can imagine – bad news for the alcohol industry. For them it is not a question of whether or not a person starts to use alcohol but merely a question of when. And of course for the profits of Big Alcohol the earlier is the better. That’s why they are trying in all possible ways to avoid that those cost-effective and high-impact measures are put into place.

Reading the document it becomes obvious that much of their measures are more for marketing than for making a difference, more for their own brand than for the well-being of people and development of societies. Much of the measures of the alcohol industry are proven to be ineffective and often even counterproductive.

That’s why I, myself, as President of IOGT International and in the function of GAPA Board Member have worked hard together with a big number of fantastic colleagues to address the growing influence on public health policy of Big Alcohol, the conflict of interest and the real effects of the policies they propose.

Here’s our Letter to World Health Organization Director-General Margaret Chan. It will also be sent to the Directors of the WHO Regional Offices.

Here is the complete Statement of Concern.

Today, February 11, the Statement will be circulated broadly throughout the international public health community, among them IOGT International, in an effort to gather at least 500 endorsements worldwide.  The endorsements will be posted on the GAPA website and communicated subsequently to Dr. Chan. Attached also is a suggested cover memo that explains how they can submit their endorsement to GAPA.