Many member organizations of IOGT International are working with and for children and young people who are especially exposed to social harm of alcohol – like children of alcoholics. Promoting child rights is an important part of our work and therefore do we issue this press release.

It is CoA week – an awareness week traditionally celebrated by NACOA organisations in the UK, Germany, USA and Brazil. And also by a broad coalition in Sweden.

IOGT International and Active – sobriety, friendship and peace are taking this whole thing global because this really is a problem that threatens children all over the world, not only in high- and middle- income countries.

To raise awareness, we have also prepared postcards and posters. 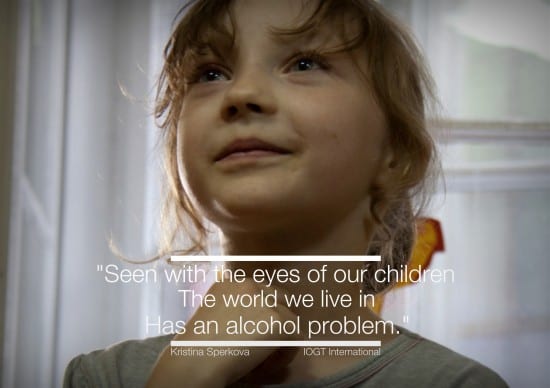 Children of Alcoholics should have a chance to grow up happily and safely – no matter where in the world they live. But unfortunately their needs are rarely part of the political or public discourse.  Decision-makers in particular and the broad public in general treat Children of Alcoholics as if they were invisible,” says Kristina Sperkova, Vice President of IOGT International.

In Australia the most recent study shows that between 17 to 34% (ca. 1 million children) live in households with at least one adult being addicted.
In the USA, mothers convicted of child abuse are 3 times more likely to be alcoholics and fathers 10 times more likely. More than half of all confirmed abuse reports and 75% of child deaths involve the use of alcohol or other drugs on the part of the parents. There are an estimated 26 million CoA in the USA.
In the European Union, there are at least 9 million children and young people growing up with alcohol-addicted parents.

The decision-makers in the heaviest alcohol consuming region in the world, Europe, need to understand that alcohol does kill the dreams and the potential of these young people. If we want productive, healthy and happy citizens and a bright future, we need to make sure our children have a joyful and safe childhood,” says Maja Stojanovska, Secretary-General of the European youth and junior organization Active-sobriety, friendship and peace.

There is a lack of facts and official records on the situation of CoA in some European and many African and Asian countries but the daily experience of Civil Society Organizations from those continents gives them insight into a huge problem that goes unnoticed by governments. The number of children suffering from their parents’ addiction is high.

Many children in Thailand are deeply affected by their parents’ alcoholism. Therefore we run a campaign called: ’If you love your child, quit using alcohol’. The main purpose of this work is to empower children and enhance their capacities to change the world, because really this world is their future,” explains Teera Watcharapranee, Executive Director of StopDrink Network, Thailand.

The use of alcohol in Iringa has caused an increase in the number of vulnerable children. Often children of alcoholics become street children, where their descent into addiction to alcohol and other drugs, crime, prostitution and extreme poverty starts. It is not right for the parents to expose their children to those harms.”

Studies from all over the world have shown that CoA are at far greater risk for developing alcohol and other problems later in their lives. Children of alcoholics are four times more likely to develop alcoholism. They score lower on measures of family cohesion, intellectual-cultural orientation, active-recreational orientation, and independence.

With the backdrop of these facts Hilary Henriques, Nacoa UK CEO and co-founder, believes:

Every child deserves to live a creative and meaningful life.  Sadly, when alcoholism is the family secret, children are more likely to experience difficult situations with family violence, neglect and other problems.  Most parents don’t choose this for their children – there are underlying problems they do not know how to deal with.

Since 1990, the Nacoa UK helpline has responded to over 200,000 requests for help from children struggling with parental alcoholism, empowering them with a variety of life skills to help them cope with many difficult challenges; enabling them to become psychologically healthy, able to deal with hurt and distress, to experience happiness and to break the cycle of addiction.”

Obviously the harm of alcohol brought upon the world’s children is a tremendous problem and a Human Rights issue.

Seen with the eyes of our children the world we live in has an alcohol problem,” says Kristina Sperkova.

Childhood and a good start into a free and rich life get ruined by grown-up’s alcohol use.

Therefore, it is fundamentally important to invest into the creation of many more alcohol free environments in countries around the world. Our governments have agreed on binding documents such as the Best Interest Principle of the Convention of the Rights of the Child and the Guiding Principle G) of the WHO Global Alcohol Strategy which are still left to be turned into reality. That’s why we urge decision-makers to act now and to give childhood a chance.”