The Undermining Of 1 Billion Rising

A wave of activism washed through the world one week ago in the form of 1 billion rising campaign initiated by Eve Ensler. People in 207 countries joined a street action, be it a flash mob, dance or rally, to express their wish to end violence against women. Statistically one in three women will be raped or beaten in her life-time. If you are lucky, it won’t be you but just look around you and most probably you will see a woman who has gone or will go through the experience of violence against her. 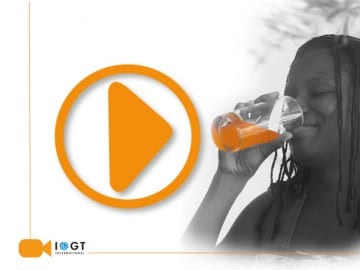 In up to 80% of all violent acts, alcohol is present. Ending gender based violence means to look at its core, which is an unequal power relation between men and women. Alcohol use is like oil to the fire keeping the flame of anger, rage and supriority alive.

Alcohol use is an excuse for violence and alcohol culture just strengthens the existing structures perpetuating inequality between men and women.

Empowering women and ending violence against women are the issues IOGT International actively and frequently engages in so there was no hesitation about joining 1 billion rising. The staff from the International Institute of IOGT-NTO movement took part in the event arranged in Dar es Salaam and as I happened to be there on that day I joined and I danced. I danced for the freedom of all the women and men, boys and girls on this planet. 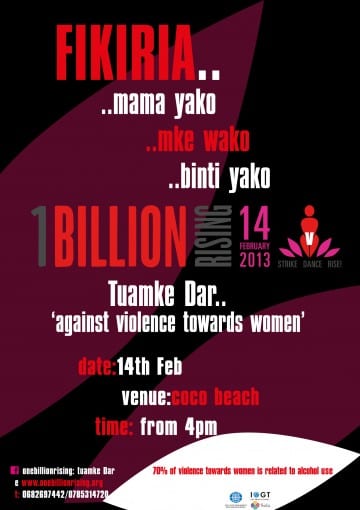 I was dancing in the sand. I looked around and felt that this is what I strive for – free citizens of this planet enjoying the moment fearlessly, knowing their rights and liberties and cherishing them.

The event has made it far. It has made it to various countries, it was covered in national TVs, it went viral in social media.  If you search for“1 billion rising” on internet you will, besides the official webpage, get lots of hits on people supporting the campaign.

One of the many decision makers is Herman van Rompuy, European Council President. One would say: “That’s positive,” and I say, yes it is BUT…

I see a tendency of him undermining his own words. European Union is patting itself on the shoulders for the work done for women, having institutions, resolutions, guidelines and policies dealing with gender equality and at the same time, the same Union does not act upon the most significant factor contributing to the violence against women – alcohol.  Mr van Rompuy highlighting all the actions done for women, also praises alcohol and the culture around it supporting the alcohol culture. The decision makers have just turned away from the evidence based effective measures and opened the door for the lobbyists of alcohol industry. Alcohol marketing, that is one of the major sources of  images contributing to gender inequality, is still not regulated and the few, well working laws concerning alcohol commercials in EU are questioned, challenged and threatened.

As we had the Valentine’s day one week ago, let me share: Words such as “I love you” do not mean anything if followed by ignorance or violence. A red rose won’t bring happiness if the vase it is put into is later on broken in a fight with the same person who brought the flower.  I suggest, that all the decision makers eager to fight for women’s rights and eager to end violence against women and girls would solve their concerns by voting for restrictive alcohol policies that protect women, men and children every day and not only one day a year.

European Women’s Lobby: Herman van Rompuy is rising against VAW! What about the EU Budget?

IOGT International booklet on gender and alcohol that I wrote: “Alcohol culture in gender zoom”

Video on Vimeo: Women and Advertising