As we gather here today, and over the next few days, girls and women in all of our countries, in our communities and in our families are at risk of, or actually experiencing violence.

What is saddening to me about this statement is that a lot of girls and women will be hurt, killed at the hands of the very men who claim to love them the most.

Maya Azucena, a vocal artist from the USA was a recent guest of honor for the IWD2013 in Dar es Salaam and she shared her story about a previous abusive relationship she was involved in. She considered herself an enlightened and a strong woman yet she didn’t seem to realize that this boyfriend, who was choking her, beating her and threatening her with a knife, was abusing her.  Her story made it clear that excuses about violence have to be stopped. His excuse was he was a ‘broken’ person, other excuses are alcohol use, other drugs use, cultural norms.

It is not normal to beat another person, to rape or to verbally abuse. The damage is irreparable even more so with verbal abuse because according to Maya:

pain from a punch heals but if someone hurts your soul, then that pain stays with you.” 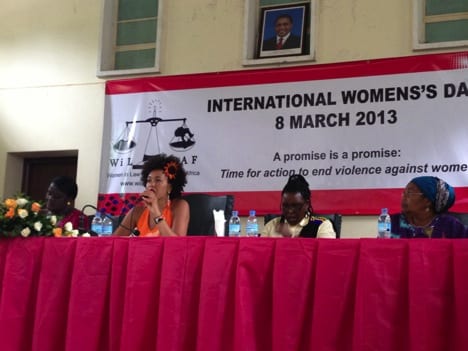 I talked to a man a few days ago who admitted to have hit his wife once. What struck me was that he couldn’t even remember what had angered him so much as to want to physically hurt her. He explained that his mother, his brothers and sisters were present and recalled that his mother started crying and kept asking him why he would beat his own mother? His brothers and sister denounced his actions and they stopped him and informed him that they would disown him if he ever did this again. He told me he has never beaten his wife again and is still embarrassed that he ever did such a despicable thing. He now intervenes if he sees any girl or woman being beaten. He also told me that whenever he sees this, he thinks: what if it was his mother, his sister or his daughter? and that’s what drives him to interfere. Now this is one person in a million. Most of us when we witness domestic violence or hear it, we act like this:

Or like this: People Opposing Women Abuse (POWA) Advertisment in South Africa

The onus is on us to stop violence because if we keep quiet, our grandmothers, sisters, daughters, granddaughters, aunts will continue to suffer at the hands of their loved ones. It is also up to us as mothers, to educate our sons, make them realize that “real men don’t rape, real men don’t beat their girlfriends or wives.We also need to teach our sons, grandsons to love and respect women enough not to beat them. We also need to support our friends, sisters who are in abusive relationships, when they finally have the guts to confess us that they are experiencing domestic violence or  any other form of violence.

Charity begins in the home. Our office just performed an alcohol situation analysis in East Africa and to my amazement, most children reported they were getting alcohol from parents. It is up to us as parents, as mothers, to end this habit of our children getting their first taste of alcohol from us. We need to learn to say NO! when we find our children being offered alcohol by spouses or relatives. We need to teach our children to say NO! to an offer of alcohol and let them know the harms it causes them and the society at large. If our children continue to see us take the beatings from our spouses; not reacting when we see or hear abuse, they see this as normal and emulate it but with our guidance, they can see the light.

The culture of violence stops with us…if we keep on sitting and accepting it as the norm then it will continue to haunt us for generations to come.

Please find the whole statement of Marai Larasi at the CSW57 here.

A TedTalk on Why Domestic Violence victims don’t leave:

On The Way To New York

One comment on “On Domestic Violence: The Culture Of Violence Stops With Us”