It is 2013, 21st century, and after years of social responsibility campaigns the alcohol industry still believes it is good news to come out in an obvious promotion article and proclaim they now put an end to sexualising and objectifying women in their marketing…

During the weekend I came across an “interesting” article on just-drinks.com. The headline read: “UK: Portman Group bans all drinks ads related to sex”. The article is interesting to dissect for its bias in reporting and for reflection on the “news” themselves.

Here are my four thoughts:

1) Who is the Portman Group really?

The Portman Group is a UK based social aspects front group of Big Alcohol. However, “just drinks.com” presents them in the article as “Industry watchdog…” that has introduced “a host of new rules, including stricter controls on online marketing and a ban on all alcohol ads related to sex.”

That the Portman Group is not an industry watchdog is self-evident and can easily be seen on their website in their self-description: “The Portman Group is the social responsibility body for alcohol producers. We operate a strict Code of Practice to ensure alcohol is marketed responsibly…”

The best analysis of who the Portman Group really is comes from the British Medical Journal:

The stated aim of the Portman Group is to promote social responsibility in the alcohol industry, with a particular focus on responsible marketing. Established in 1989, it claims to ‘show leadership on best practice in the area of alcohol responsibility’ and to ‘foster a balanced understanding of alcohol-related issues.’

Its former chief executive, Jean Coussins, rejected any suggestion that the group ‘represent[s] the industry’ or acts as a `trade association or lobby group.’

However, the evidence of its involvement in research and policy consultations indicates that it is not independent of the industry and that it lobbies on behalf of the industry.”

The British Medical Journal goes on to dissect not only the lobbying activities but also the policy positions taken by the Big Alcohol front group:

In its statements the group emphasises individual responsibility, blaming a minority of heavy drinkers for alcohol related problems. This ignores many aspects of alcohol related harm and is inconsistent with the evidence base that supports current public health thinking. The group recently flexed its muscles in the debate around the Scottish government’s plans to introduce a minimum price per unit of alcohol—a policy that is supported by public health professionals worldwide…”

Two things become apparent: one is that “just-drinks.com” is actually not reporting in the spirit of journalism but advertising the image of social responsibility of the alcohol industry; the other one is all alarm bells are ringing when  a Big Alcohol front group comes out with new “codes of conduct” for self-regulation, when they at the same time lobby heavily and aggressively against evidence-based measures to protect public health.

That leads me to my second thought.

2) What is their “new” effort for self-regulation all about?

Evidence is piling up all over the world, that self-regulation is not working. We have recently summarised just a bit of it in a new booklet: “Profit Over Human Rights. Big Alcohol Out Of Context In Public Health Policy Making”. Here are just three facts: 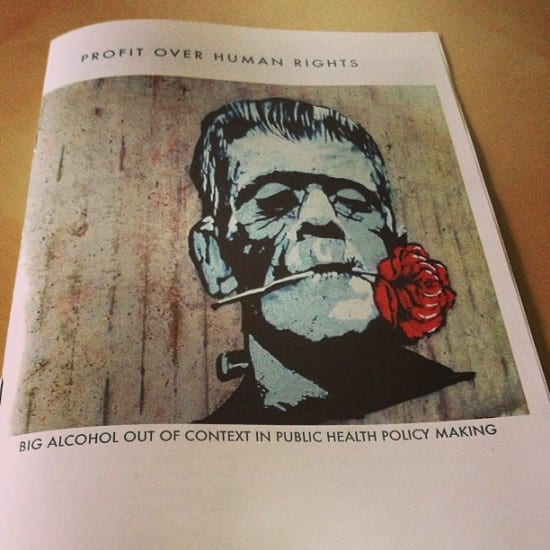 Obviously to be able to market their harmful products is an important practice for Big Alcohol. As people become more and more aware of the negative impact of alcohol use on their health and on the development of society, Big Alcohol needs to (and in fact does) invest heavily in marketing campaigns to promote their products. Alcohol marketing has been shown to impact consumption: for example youth exposed to alcohol advertising will start using alcohol earlier or if they already do, will consume bigger amounts; children in the UK have been found to be more familiar with brands of alcohol industry companies than with brands of companies producing age-related candy, ice cream and cakes.

It’s clear to all that alcohol marketing is lucrative for the alcohol industry. Therefore Big Alcohol needs to come up with new tactics to avoid statutory marketing restrictions and an outright ban of alcohol marketing. Self-regulation is their way of doing it and the “new” code of conduct by the Portman Group (“Code of Practice on the Naming, Packaging and Promotion of Alcoholic Drinks, Fifth Edition”) is not new but just another attempt to portray social responsibility while the companies that form this industry front group – ABInBev, Bacardi Brown-Forman, SHS Drinks Group (formerly Beverage Brands UK), C&C Group, Carlsberg UK, Diageo great Britain, Heineken UK, Molson Coors Brewing Company UK, Pernod Ricard UK – are a Who Is Who of violators of their own codes of conduct.

This point on the tactics of Big Alcohol to use self-regulation to divert real and effective regulation of alcohol marketing – something that the people in Europe (for example) clearly want leads me to latest evidence on the failing of self-regulation.

3) Self-regulation does not work

It’s as simple as checking the June edition of the EUCAM newsletter where I found two items related to the issue of self-regulation:

The move of the Portman Group has an air of public relations gimmick around it to divert attention form a recent development in the UK: Adverts promoting alcohol brands could finally face legal restrictions in the United Kingdom after Ofcom (the government-approved regulatory and competition authority for the broadcasting industry) said it requires advertising regulators to review the rules that limit their exposure to children. The request follows an Ofcom report which shows that the number of alcohol adverts children see has risen.

A new study by the Norris Cotton Cancer Center finds that current constraints on advertising for alcohol products in movies that are viewed by adolescents are ineffective. The study analysed alcohol and tobacco portrayal in popular movies between 1996 and 2009. US tobacco placement became regulated by law and dropped significantly; alcohol placement was regulated by the industry itself and raised considerably.

It is clear that children and youth all over the world are a target group of Big Alcohol. And Big Alcohol keeps targeting them despite their own rules and codes of conduct. That consideration leads to my final point, the unethical marketing of alcohol around the world.

That children and youth are being targeted is actually quite obvious and research has created a vast amount of evidence. This tactic is also “logic” for Big Alcohol because the earlier a person starts using alcohol, the tighter will certain brand allegiance be and the heavier will that person be consuming alcohol later on in life. For Big Alcohol this reads: profit. For everybody else this reads: public health harm and heavy burden on the future.

Big Alcohol is also portraying women and girls as objects, often sexualized, in marketing campaigns. Examples are all over the internet.

A key problem with self-regulation is that violating their own rules is still profitable for Big Alcohol because until an advertisement has to be taken off air – after a successful complaint, it has already reached its target group and it will even after that continue to circulate on channels like YouTube. Another problem is that complaining about an advertisement is difficult and people rarely do it, even if they are really annoyed. It’s simply not common knowledge that you can complain, where and how to do it. And just consulting common sense tells us that there are few people who go home after seeing a movie in the cinema and file a complaint about an alcohol ad that objectifies and sexualises women.

Alcohol marketing sexualising and objectifying women contributes to a harmful culture in which values of male domination over females are perpetuated, that portrays it as rewarding to attain a lifestyle where women serve as tools for male satisfaction, and that continuously subordinates women and girls. It is this culture that contributes to making alcohol such a  tremendous factor behind violence against women.

It is 2013, 21st century, and after years of social responsibility campaigns the alcohol industry still believes it is good news to come out in an obvious promotion article and proclaim they now put an end to sexualising and objectifying women in their marketing. It’s cynical because as we read this piece, and maybe even take a look at their “new” codes of practice, millions of people around the world take a look at the very marketing the industry now wants to get rid of.

I think that girls and women deserve better than those shady promises that so obviously are public relations strategy and not core business; I think boys and men, too, deserve better; I think the world deserves to be freed from alcohol marketing.

The Portman Group promotion in “just-drinks.com”

Code of Practice on the Naming, Packaging and Promotion of Alcoholic Drinks, Fifth Edition

Scientific Opinion of the Science Group of the European Alcohol and Health Forum: “Does marketing communication impact on the volume and patterns of consumption of alcoholic beverages, especially by young people? – a review of longitudinal studies”

Real Reasons Why Alcohol Use Among African Youth Is Rising