The European Commission is supposed to be independent “beyond doubt” but Trade Commissioner De Gucht has a million Euro stake in a Tuscan wine production, shining the spot light on apparent conflict of interest in the upcoming trade talks between the EU and the US, and also other countries around the world…

The European Union really has many problems these days: economic and finical crisis; Euro crisis; climate crisis; Alcohol crisis; Youth unemployment; right-wing extremism. The list is long obviously. But there are a few crisis that we are all more or less accustomed to already because they’ve been with the European Union for such a long time: political crisis; and especially democracy deficit.

I found this photograph when googling “EU in trouble” and the road sign to the left “Politicians at work” tells a lot, especially together with the one on the right: Democracy is a dead-end road but the EU has anyway taken a different direction.

Both are interconnected obviously and in my work for Active – sobriety, friendship and peace and the beautiful Human Rights Generation campaign, we have addressed some more examples:

The President of the European Commission for example spends €7.5 Million on cocktail parties and expensive gifts every year.

And a week ago I’ve found a blog post called: “Fancy a TTIPPLE? A Deguchtation?” It also had the sarcastic sub-heading “EU trade commissioner Karel De Gucht’s vineyard bears fruit. [We] look forward to the US marketing campaign…”

TTIP means Transatlantic Trade and Investment Partnership, so the blog post is about Trade Commissioner De Gucht‘s obvious conflict of interest in-between policy making, and leading these negotiations for the EU and his personal interests in the wine production.

For a mere €22,49 pick up a nice Chianti from the Tuscan De Gucht owns a smallholding in Tuscany producing among others Chianti and the 2010 “La Macinaia” has been launched for sale in Belgium.
As the EU starts negotiations with the US over a new trade deal, who better for Europe’s alcohol industry to have running the show? The problem is, however, that the alcohol industry has opposing interest to those of the general public. Big Alcohol cares about more profits whereas the public interest is all about public health, a recovering economy, opportunities for children and young people, social inclusion – all which are harmed by Europe’s alcohol use.
And IOGT International has repeatedly made the case for alcohol to be excluded from free trade negotiations (TTIP, TPP, and bilateral ones between the EU and African, Asian countries) because it is not an ordinary commodity.
What is striking about the De Gicht case and the apparent conflict of interest is that the European Commission has no fear of a potential conflict of interest. His investment in the smallholding – valued at 1,000,000 euros – is all set out in the declaration of financial interests he made when he was appointed. 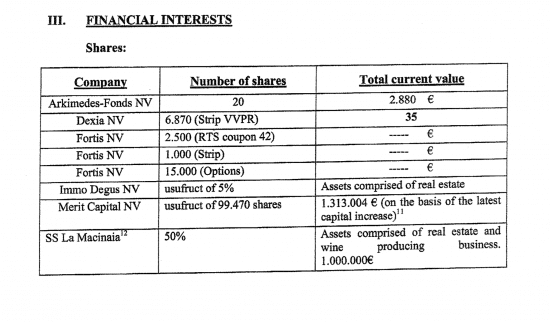 Conflict of interest the European Commission doesn’t care about

Article 9 of the Treaty of Lisbon is very clear on this type of situations: “The Union shall have an institutional framework which shall aim to promote its values, advance its objectives, serve its interests, those of its citizens and those of the Member States, and ensure the consistency, effectiveness and continuity of its policies and actions.”

And especially three provisions in Article 9 D follow suit to give a clear mandate and mission to the European Commission:

1. The Commission shall promote the general interest of the Union and take appropriate initiatives to that end.”

3. The Commission’s term of office shall be five years. The members of the Commission shall be chosen on the ground of their general competence and European commitment from persons whose independence is beyond doubt.”

8. The Commission, as a body, shall be responsible to the European Parliament.”

Mr. De Gucht has a million Euro investment in wine production. I can see that this sum might be peanuts. But Mr. De Gucht’s independence is not “beyond doubt”. Not all.

During the tenure of the current leaders in the EU we have had similar headlines concerning Mr. Barroso, the President of the European Commission and Mr. Van Rompuy, the President of the European Council. We se powerful men sitting in the lap of Big Alcohol, praising Big Alcohol and having personal, economic interests in the alcohol industry, while failing to act to control, reduce and prevent alcohol harm in Europe and other parts of the world.

The European leadership, especially the European Commission is not independent “beyond doubt” and obviously doesn’t even make an attempt to be.

So far, he and his colleagues have failed to, and the crisis in democracy continues – and we might know why.