How the NBA turns the game that they claim to “love” into just another vehicle for Big Alcohol to glamorise alcohol, target youth and undermine health, well-being and the power of sports…

The National Basketball Association (NBA) season 2012 – 2013 has just come to an end. It’s the first time I have followed an entire season of Basketball in North America, watched at least one game per week had an an all-access season pass to watch NBA games and associated programs on demand. In March I even had the fascinating opportunity to see a match live in Madison Square Garden, NYC. 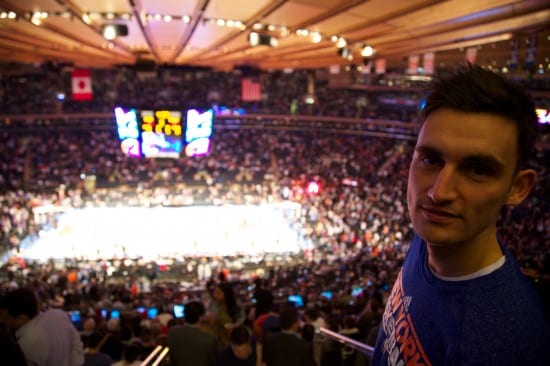 I have enjoyed the game of basketball for many years, have been playing it myself since my adolescence and really got inspired by Michael Jordan during the 90’s. But this year, this season soon after tip-off forced me to realize that the game is being compromised by the body that should govern it and that should take of it – the NBA and its Commissioner David Stern.

This NBA is so alcoholized that it was mind-numbing from time to time and so my year with the NBA also became a study of how Big Alcohol abuses sports to reach and target youth, to build myths around its products and glamorise alcohol – and how organisations like NBA (Fifa is another example) play along for the sake of profits and forsaking what’s best for children, youth and society at large.

Before I share with you a snapshot of what I came across and what everybody who watches the NBA is subjected to during an NBA season, I’d just like to start by showing you this one: 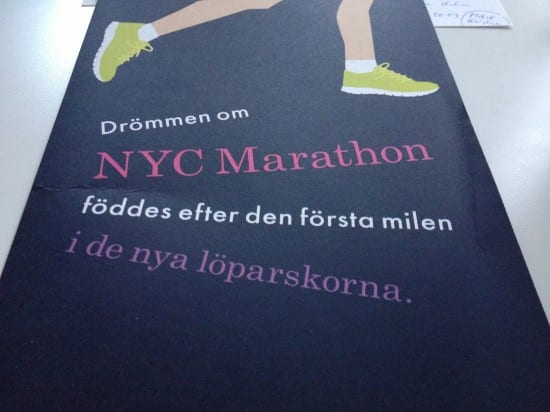 This is marketing that came by post to my home and it’s not about running shoes, but a credit card provider. This example shows so clearly what marketing is all about and where the development is going ever more: not product information but selling “dreams”, “lifestyle”, “status”. I find this one disturbing because it so obviously promotes hostile values: it’s the shoes that make the difference, not the joy of running.

Big Alcohol has the same approach – with the “minor” difference that it promotes hazardous products – harmful for health, economy, society, democracy. For that, I’d like to share with you two recent examples.

Inside The NBA Glamorises Alcohol

The first one is about a program called “Inside The NBA”, which is an award winning show to talk about basketball, and analyse games and players. The usually have the superstars Shaquille O’Neill and Charles Barkley along with Kenny Smith as experts. 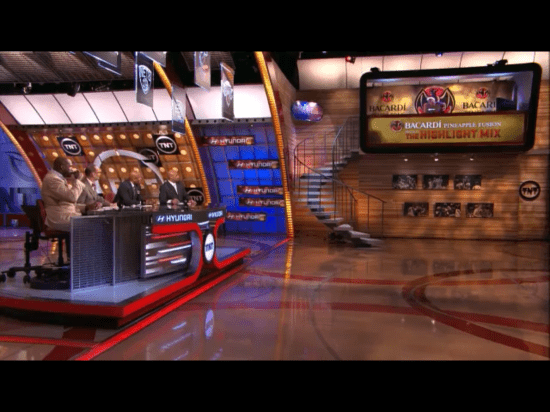 In the slide show I put together you can see how they use one whole segment between to commercial breaks for promoting alcohol. Just before the start of the Playoffs Bacardi and the NBA launched the “Bacardi Highlight Mixer“.

This is a tool where people can go online to create their own highlight reels with provided NBA scenes and a selection of beats.

I think it’s obvious that the target group for this is not my 50-year old dad who also loves basketball, but teenagers. And it is obvious that the purpose of all this is to subtly promote Bacardi – associate the brand with coolness, toughness, success, admiration, style – everything a highlight video with the best music represents.

The whole idea behind it is, of course, to launch a new product: Bacardi Pineapple Fusion – because mixing basketball scenes and hip hop beats is just like mixing together pineapple and alcohol.

The NBA and Bacardi do this in a detailed effort: they built a special platform, with Bacardi all over it, for the famous and re-known DJ of the Miami Heat. They make Shaq join the DJ and the whole crew talk about the highlight mix, the music beats and lauch and crack jokes – all with the Bacardi brand in the background. 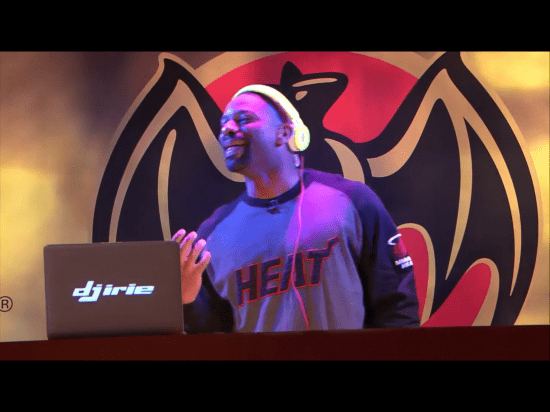 I think this violates all the codes of conduct and self-regulation rules that Big Alcohol has come up with for itself. And I also think it’s unacceptable that the NBA turns basketball into a tool for Big Alcohol to target young people, to glamorize alcohol and to create an alcohol culture where alcohol is virtually omnipresent and deeply associated with success, coolness and swag.

The NBA has – like the alcohol industry – its own corporate social responsibibilty program: among others an “NBA Fit” week, and an “NBA Cares” program. 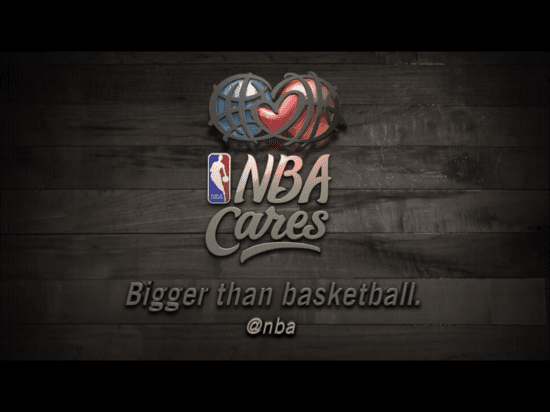 Bigger than basketball is only profit – for the NBA and Big Alcohol.

Watching NBA on mobile devices meant during the 2012 – 2013 season that I saw many “NBA Cares” spots about community projects, and other things each team and the NBA as a whole do “to give back”. In the light of the tremendous and often overwhelming amount of alcohol marketing that NBA fans are subjected to, it becomes clear however that the NBA cares mostly for profits and not equally much for young people’s best.

As a matter of fact the Bacardi example is really just one example of many. Even other shows, like “Game Time”, boast alcohol marketing: 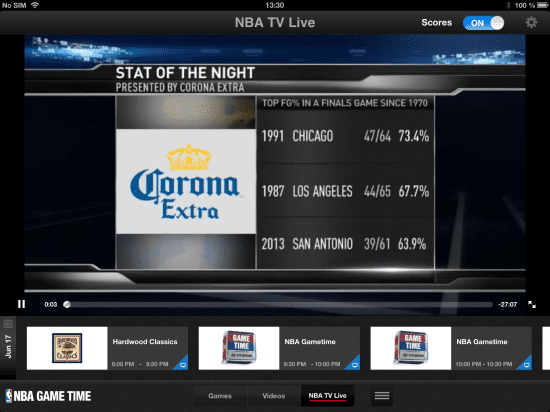 Alcohol Marketing coming at through my mobile device

Facts and statistics and other segments of an NBA broadcast are sponsored by Big Alcohol. 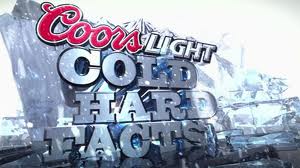 NBA product placement all over the place 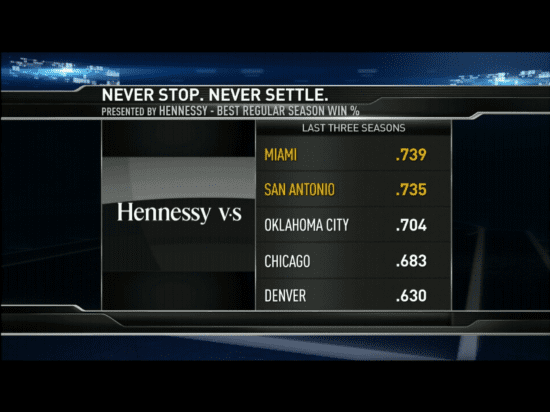 Violating there own codes of conduct? #BigAlcohol

There’s a huge amount of examples of alcohol marketing during NBA broadcasts, not even during the commercial breaks.

But the second example I’d like to show you is from the arenas. During the days when there’s no basketball there are anyway many videos to watch: highlights and press conferences and so called micro-movies. I really enjoy those because they are beautifully made and the portray the whole beauty of the game of basketball. But they also bring tremendous amounts of alcohol marketing across.

The first few seconds were filled with the following scenes: Dwane Wade entering the Miami Heat arena for a shoot around during off-day practice… 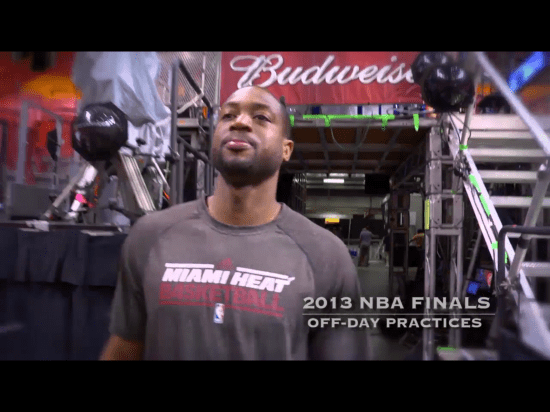 It continues with Lebron James getting ready for off-day practice… 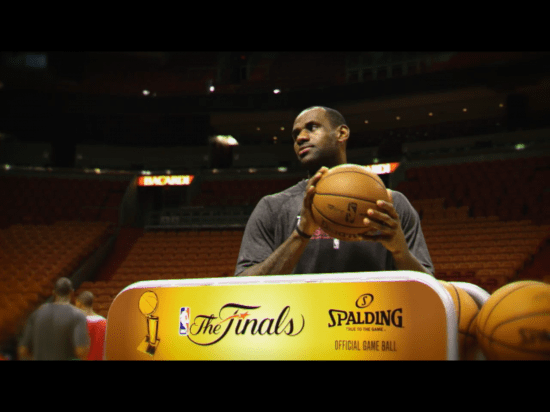 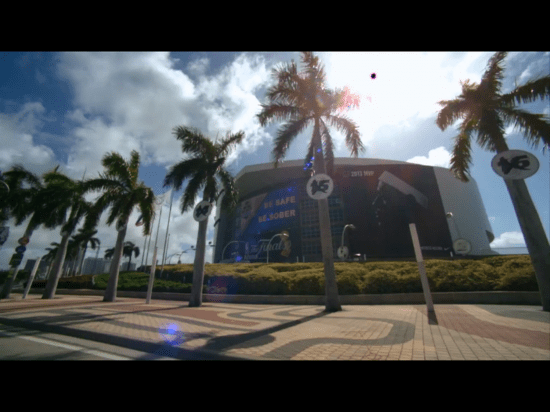 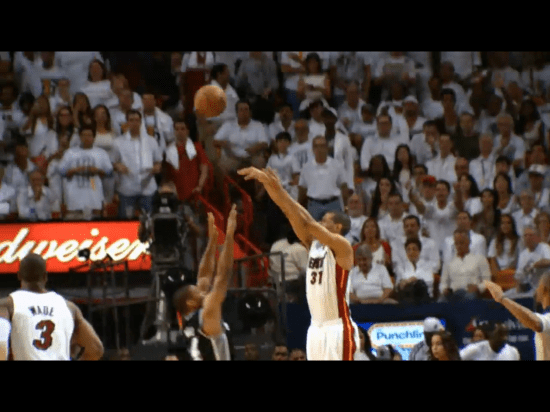 Big shot after big shot has alcohol marketing in the background. Another example directly taken from the micro-movie is this one… 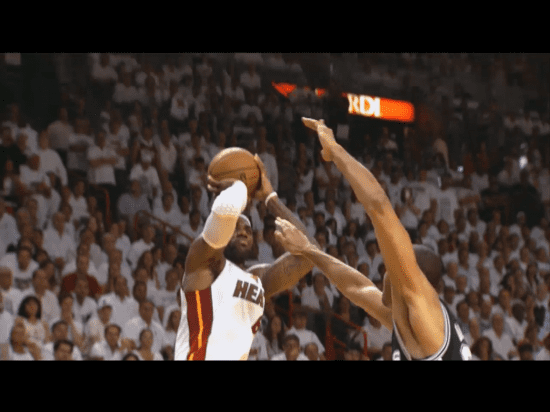 The biggest star of the game of basketball hits a big shot in the biggest game of his career, and Bacardi has his back… 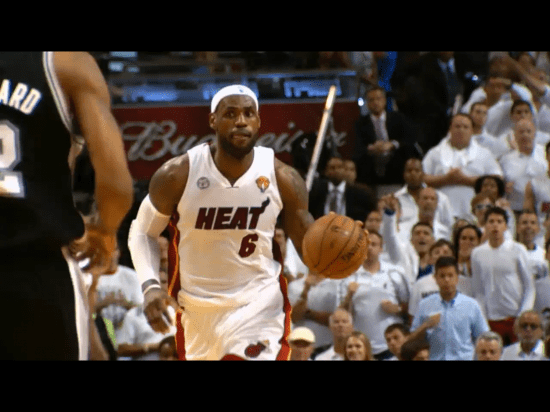 Or Budweiser…, while “King James” brings the ball up the floor and eventually takes a “clutch shot”… 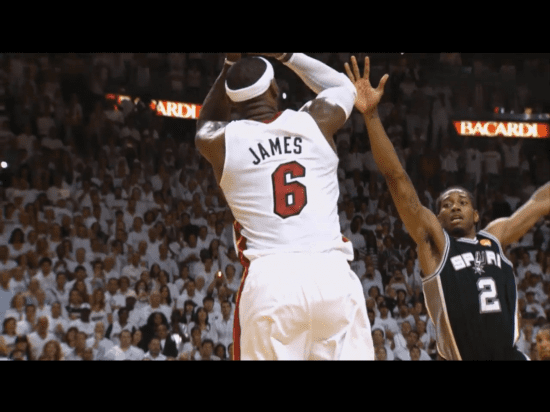 That propels his team to victory and the start of celebrations… 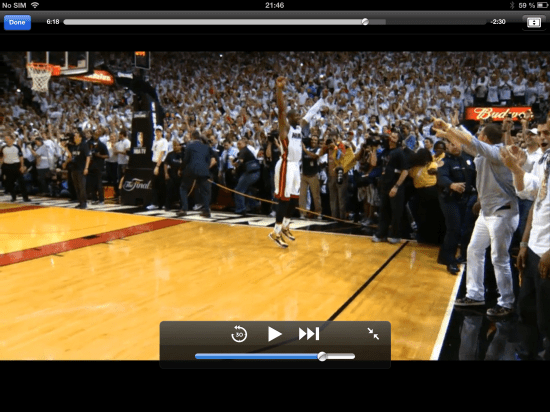 So far you have seen eight snapshots all featuring alcohol marketing, out of a 6.18 minute video. Everybody understands by now that in-arena marketing really does pay off. 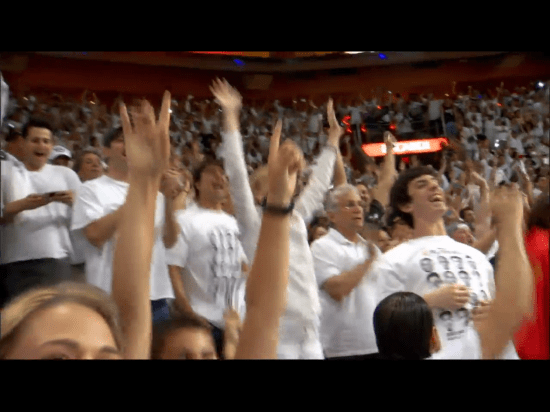 And do you remember still the outside-arena message: “Be sober. Be safe”?

This is what the NBA, the teams and players really communicate: 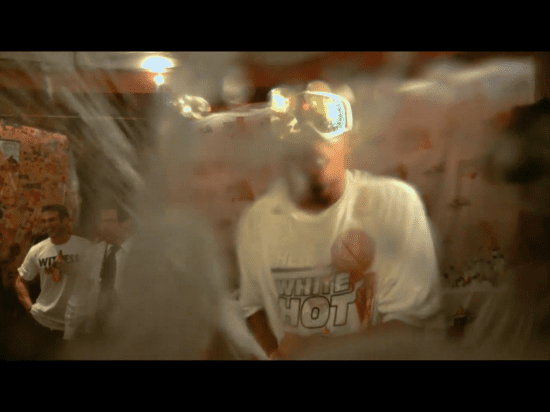 After a season with the NBA, the alcoholization of basketball is peaking right now. Alcohol marketing is everywhere and blatantly targeting young people. Players are no role models and health messages are systematically undermined and contradicted.

They say that “Basketball never stops” – but alcohol marketing and the practices of Big Alcohol need to be stopped, children and youth need to be protected and the NBA, like other governing bodies of other sports, needs to get its priorities right. 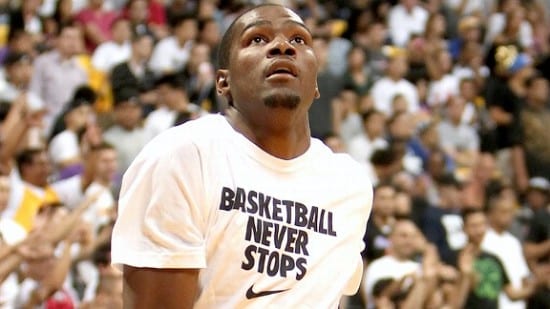 But alcohol marketing must be stoppped.

In that spirit it is useful to dwell on a powerful quote a came across the other day:

It’s trying to delude you into making an irrational choice based on lack of information. In fact one of the major goals of business is to undermine market by making uninformed consumers who will make irrational choices.” (Noam Chomsky – Global Hegemony: the Facts, the Images, April 20, 2011)

Having watched NBA programes and games for a season, and having done this little analysis, I think evidence speaks a clear language. For example, the Bacardi Highlight Mixer is obviously trying to make young people choose irrationally.

Chomsky also has commented on the connection of marketing and entertainment – which the NBA is part of, too:

Entertainment has the merit not only of being better suited to helping sell goods; it is an effective vehicle for hidden ideological messages. Furthermore, in a system of high and growing inequality, entertainment is the contemporary equivalent of the Roman ‘games of the circus’ that diverts the public from politics and generates a political apathy that is helpful to preservation of the status quo […]

The public is not sovereign over the media— the owners and managers, seeking ads, decide what is to be offered, and the public must choose among these.” (Manufacturing Consent – Noam Chomsky)

In Brazil this can be clearly seen – but in a good way – because millions of people there don’t enjoy the entertainment of the football games going on – although Fifa thinks they should – and instead build the Brazilian democracy by demonstrating and advocating for hospitals and schools instead of football stadiums. But this will be the subject of my next blog entry.

What we see these days is a troublesome development driven by big industries like Big Alcohol, together with the advertising industry, away from human values towards material values. Running is not about running anymore, it’s about the shoes that running is done in. Basketball is not about the game anymore, the hoop and the ball but about the constructed lifestyle of highlight mixes and heavily marketed products, no matter if they are harmful or not.

And this development targets and pressures the youngest ones. Chomsky writes:

… [n]ow there’s a huge part of the advertising industry which is designed to capture children.

Anyone who has any experience with children can see this. It’s literally destroying childhood.  […] And it’s done consciously to trap children from infancy and then to turn them into consumer addicts.”

You are born a human being and then you are made a consumer by the ever growing efforts and aggressive tactics of industries like Big Alcohol. Major industries are devoted to the task of  “fabricating wants.” In the words of business leaders themselves, the task is to direct people to “the superficial things” of life, like “fashionable consumption.” That way people can be atomized, separated from one another, seeking personal gain alone, diverted from dangerous efforts to think for themselves and challenge authority.