Day #6 of the capacity-building trip through East Africa was devoted to a workshop with BAPA, RADAPA, and KAPA – abbreviations that stand for incredibly dedicated and heart-driven people who are committing to tremendous efforts for promoting a freer, richer life in Burundi, Rwanda, Kenya…

Today I felt amazement in real tourist style: “The sun stands so high, high above me. Whoooww!”, my mind thought. It was lunch break and I took a minute to sit outside and bath in her eternal rays. 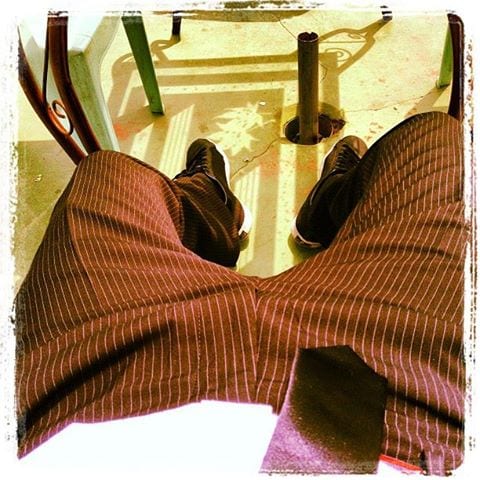 This was one of my two short breaks today – and no I am neither complaining nor bragging. I am feeling amazed and inspired by the commitment and persistence we all generated today, together. We were 15 people in the capacity-building workshop today, with participants from three different countries and alcohol policy alliances. Burundi Alcohol Policy Alliance (BAPA) was joined in Bujumbura by Kenya Alcohol Policy Alliance (KAPA) and Rwanda Alcohol and Drug Abuse Policy Alliance (RADAPA). All alliances have different starting points, histories and backgrounds. KAPA is the oldest one of them and has achieved to play a significant role in Kenyan alcohol politics. Kenya must be seen as the regions role model country in terms of regulating alcohol on public health promotion and social development grounds. RADAPA is young but has developed fast into a recognised actor and is part of the Rwandese NCD forum. BAPA is the youngest and really on the go. It is for instance planning to create and conduct a national Alcohol Free Day in Burundi.

Together we discussed three highly intriguing issues today that challenged my as facilitator, that lifted the whole discussion and group dynamics and that allowed me to learn more together with all the others. Before that, I had given a briefing on alcohol policy advocacy. 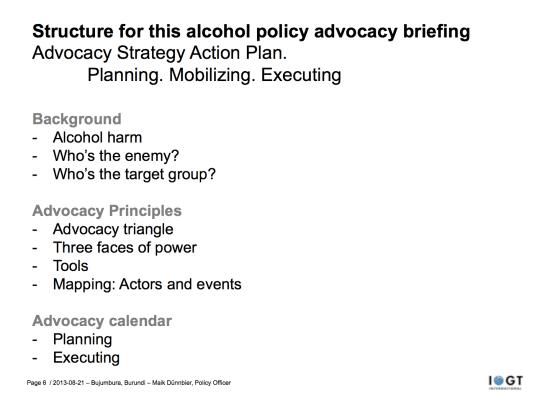 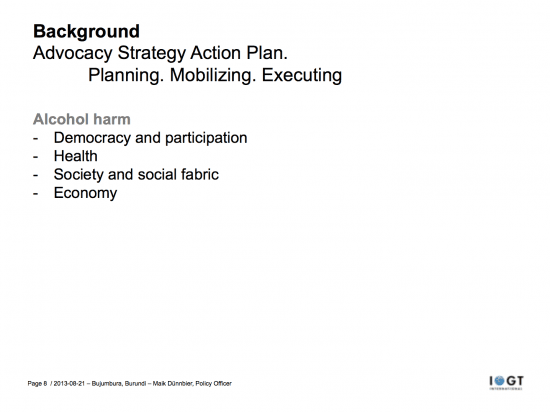 We talked about the word “long-term” as a key concept in the whole discussion about the economic costs versus economic benefits of alcohol in a society. Some participants explained they way the global alcohol industry argues in their country to avoid regulation: they promote facts about how many jobs they create, how much tax revenue they bring to the government’s budget… we know this very argument from so many other countries around the world. While Africa is lacking the figures, we can take them from the EU: the Brewers of Europe claim that “beer creates two million jobs” and provides “over  €5o billion to governments in the EU”. As a matter of fact, alcohol causes costs to the EU of €156 billion annually. Simply put, it is socially the most harmful drug.

What happens is that decision-makers choose to focus on the short-term gains from alcohol industry activity – a huge problem in East Africa where there is so huge a need for building businesses to create jobs and grow the economy. The costs for alcohol harms, like NCDs epidemic, HIV/ Aids epidemic, alcohol violence against women, children of alcoholics, are occurring later and are therefore often ignored. That is why we talked about the word “long-term” and the need to advocate for long-term policies that take into account all evidence, and to advocate for a mind-shift in policy-making that focuses more on the sustainability of society, economic activity and social development.

Additionally there are also costs caused by alcohol harm that are tremendous and rather immediate, but they are never taken into consideration when arguing about the economic contribution of alcohol to the society: loss of productivity, the economic harm. While alcohol production, distribution and retail, marketing create jobs, they also destroy jobs and lives. 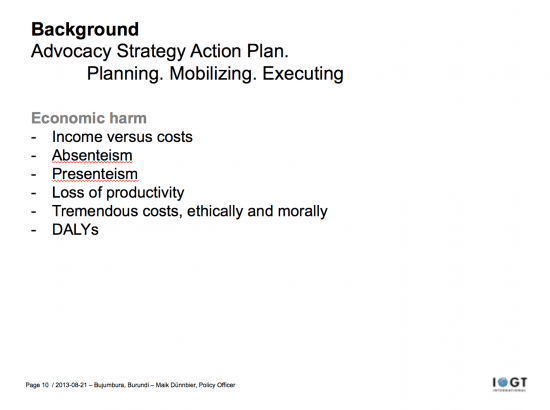 Small- and Medium-sized enterprises feel the problems of absenteeism and presenteeism directly and immediately. It’s just important to start talking about it, do more research concerning this issue and changing the myth about alcohol’s importance for the economy.

We then moved on the talk about alcohol that serves as social facilitator in many villages around East Africa, while at the same time we know from evidence that alcohol is eroding and dissolving the social fabric. How does this go together? The answer is about plusses and minuses and the myths driving the plus side: 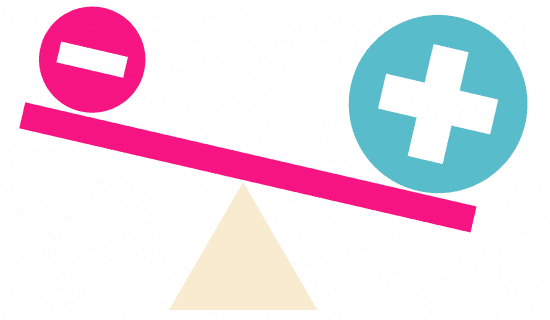 Myths driving the plus side of alcohol use

East African village elders (for example) are not the only ones believing the myths about alcohol as “magic drink” that makes people more social, more daring, more outgoing, more fun and adventurous etc. I have friends in Europe and the USA who hold the same believes. And for all those alcohol seems to be a social facilitator – making it easier to get in touch with people, meet and hang out with foreigners. The reality however is that science cannot show that alcohol actually does have all these effects. They are mainly due to expectations. Alcohol works like a placebo.

What is not due to expectations is the amount of alcohol harm that erodes the social fabric – violence against women and girls, children of alcoholic parents, street children, road traffic accidents, young people’s alcohol use and intoxication alcohol’s gateway effect into other drugs, and so on. When we had gone through these reflections and the related examples we could see that a crucial point for advocacy is to alter the way people see alcohol, a change of culture and believes held about the substance of ethanol. Advocacy is about addressing, influencing and providing crucial services to decision-makers. And they, too, need to re-think the effects of alcohol when it comes to the detrimental, dissolving effects for the social fabric and human capital. But advocacy also needs to target and mobilise the broader public and civil society.

And finally we talked about a third highly interesting question: how to recognise that policy proposals are submitted by the global alcohol industry? Yes, we addressed examples of Uganda and Botswana where Big Alcohol through ICAP managed to influence and bias the governments’ draft alcohol bill. IOGT-NTO and FORUT staff and their partners and allies were able to expose the alcohol industry behind those proposals and so were able to stop the weak, watered down draft policies. 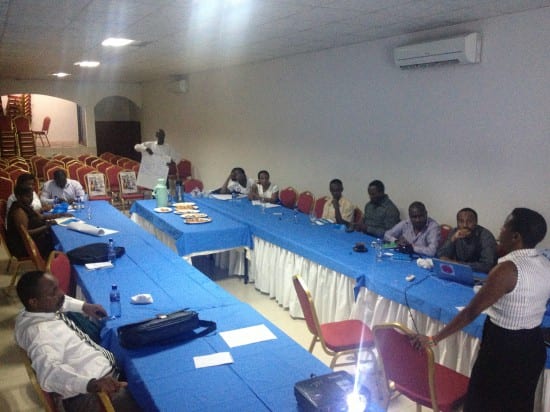 Workshop room with many of the participants #HeartDriven

They could stop the law from being adopted because they knew WHO reports, and briefings by policy-makers. To be an effective advocator means to be  aware of the policy proposals by Big Alcohol and their social aspects front groups, to be aware of their demands for self-regulation, and of the nature of their demands. That’s a challenge in East Africa and for the alliances because it demands huge efforts and meticulous work since the global alcohol industry is so aggressively lobbying all over the place and since they are crafty at disguising themselves and their interests.

These discussions prepared the group work phase were all networks went through a step-by-step process that allowed them to eventually prioritise one political issue and their underlying values for addressing the respective issue. We also analysed tools that will help each alliance to get where they choose to go with their policy demand, created an advocacy map, PR-plan and outlined indicators that can help telling if they are on the right track towards achieving their policy demand.

So, after an intense and fun day, after more than nine hours of work, we reached the final slide. Now, we move ahead by completing four tasks as homework so that we can have the final advocacy strategy ready by the end of the year. 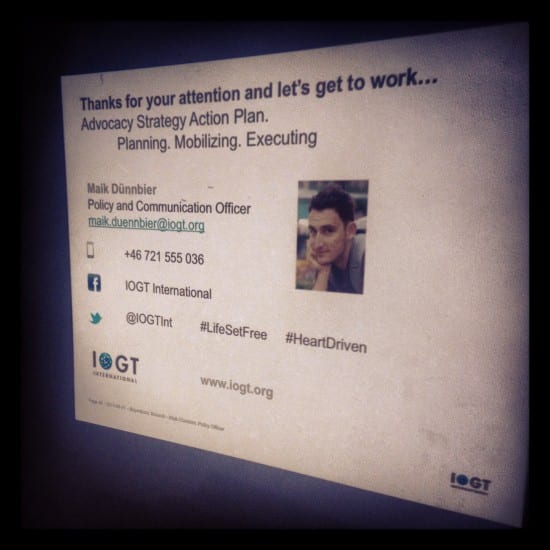 The end of an intense, challenging, gratifying, joyful and inspiring day #LifeSetFree

Out Of Bujumbura Great Ideas