by Maik Dünnbier Posted on September 4, 2013 in
Policy, Sustainable Development

Big Alcohol and Big Tobacco are using trade talks more and more aggressively to erode and circumvent public health policies. It is in this context that journalists must perform a better job in being a watchdog of decision-makers and the government must realise – once they wake up from the day dreaming about Obama – that boundless trade does not propel development and welfare but threaten and erode it…

I have been reading with profound interest what Kristina wrote today in the morning in her latest blog entry “The Audacity Of Secrecy”, commenting on Barack Obama’s visit to Sweden and what IOGT International demands from the Obama administration and the Reinfeldt government.

The way trade negotiations are being conducted these days are far away from being fair, democratic and directed towards the best for the people. They are more like high school breaks where the strong, popular (USA, EU) ones bully the weaker, dependent ones (Low- and middle income countries in Africa and Asia) and where the invisible ones (small countries with functioning societies like Sweden) get all excited, if the strong (Obama for a day in Sweden) ones throw a glance at them. 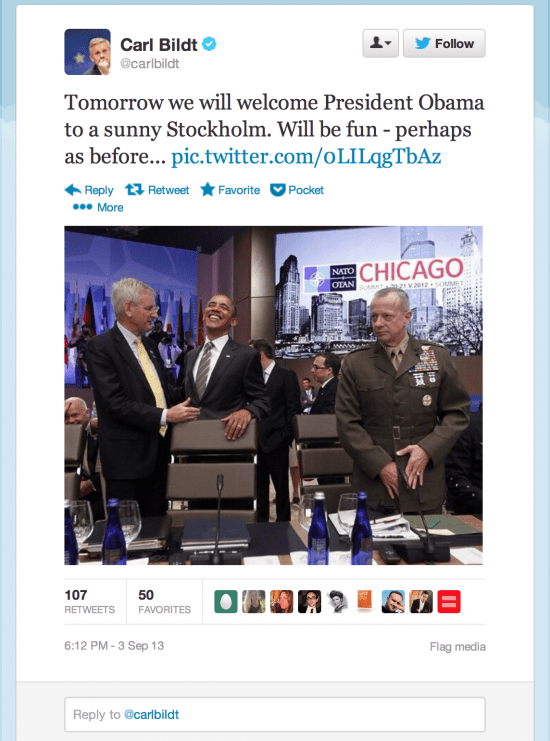 It’s obvious that the Swedish government is very submissive in relation to the Obama administration. No critique on their agenda, as far as I can see. 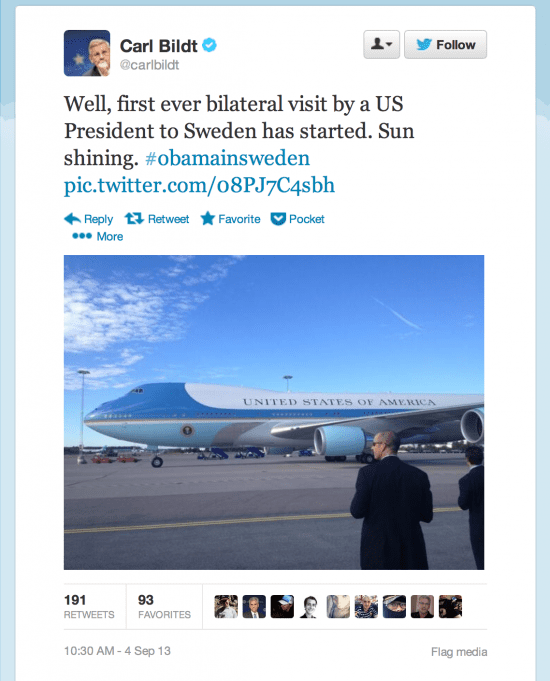 Another Bildt Photograph: Air Force One arriving at Arlanda Airport

Sweden’s Minister for Foreign Affairs is today more a groupie than an equal negotiation partner, using this opportunity to promote his own brand with the help of the celebrity that Obama is. I think this doesn’t seem to be a fruitful ground for open, honest negotiations. 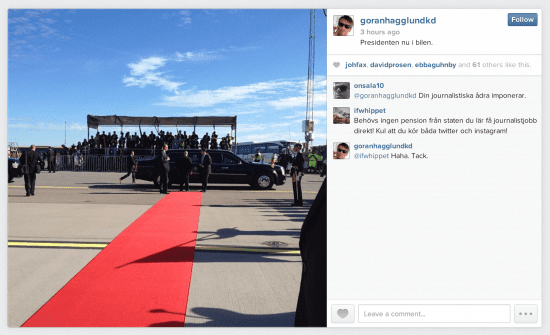 The Swedish government does everything to document as many details as possible of the Obama visit. Following them in the social media, I wonder when does the critical thinking start?

After the media, especially Swedish Television SVT (live reporting 7 hours throughout the day) indulged in all these impressions, too, enjoying the feeling and illusion of temporary greatness, SVT also moved on to look at political issues that are on the agenda. One of the bigger ones is the topic of trade, especially the TTIP – Transatlantic Trade and Investment Partnership.

And it was during the broadcast on this topic, that I got shocked by the shallowness of journalism and the propaganda by both the Swedish Minister for Trade Ewa Björling and the General Director of the National Board of Trade Lena Johansson.

Ewa Björling’s policy is to eliminate all industrial customs, to work for as cheap agricultural products as possible and basically take away all technical barriers to trade – for instance to have harmonized quality standards. Her ultimate goal for the TTIP talks and the final agreement is to come up with as broad and as far reaching an agreement as possible.

– It’s troublesome that the minister fro trade does not care to mention public health concerns.

– In the absence of those concerns and clear signals that policies, regulations and non-tariff barriers protecting public health will remain untouched I really start to worry. Sweden has in place important alcohol policy measures that are evidence-based and have a high-impact on protecting public health and welfare. But of course they are obstacles to trade.

– It’s important to have in place obstacles to trade because not all commodities that can be traded are ordinary, problem-less goods. Alcohol is no ordinary commodity.

Lena Johansson of the Swedish Board of Trade, a government agency, had more opportunities the her minister to reflect on downsides of trade, but she just laughed them off. All of the questions relating to negative effects of trade. 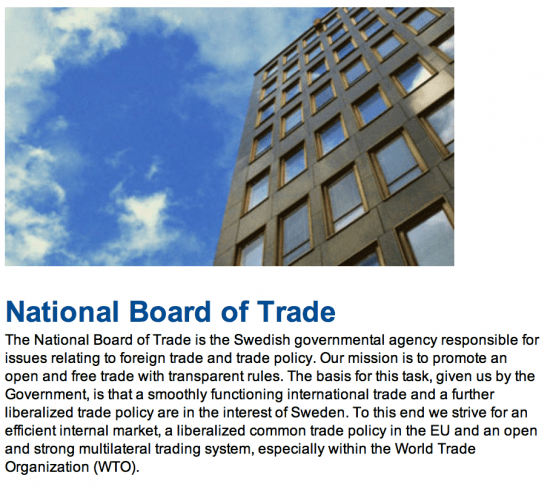 About the Swedish Board of Trade

The SVT journalists were not well-prepared for this interview and did obviously not have much background knowledge about the trade negotiations. But they made an effort to look at different aspects of the topic.

Their question why not all EU countries are equally excited about the TTIP like Sweden was largely ignored by Lena Johansson. A revealing and sad moment occurred when the journalists asked about the impact of the TTIP agreement on Sweden. Mrs. Johansson talked in passing, and obviously unaware of the ethical dimension of her talk, about the bullying and pressuring that is going on when both the USA and the EU conduct trade talk with inferior countries, like in South East Asia. Much else she didn’t say in reply to the question.

Another question that dealt with the possibility of downsides to a TTIP agreement was answered with a clear “No!” According to the Swedish Board of Trade no country in the EU – except France and their film industry – has anything to loose from a TTIP agreement. And that is why she also ventured to answer the question whether Sweden would be for totally open trade or rather prefer some exceptions, by stuttering and finally saying that she cannot see anything that Sweden needed to defend in terms of trade barriers.

There were apparently only positive effects of a TTIP agreement for Swedish people: lower prices, bigger supply of products and more employment.

At that point it was obvious that her performance was a propaganda exercise. The repeated questions to look at negative aspects of trade where all shrugged off, laughed or stuttered away – and the answers were all essentially the same: boundless trade is good for all.

– It’s therefore important to emphasize the point from above: more than 160 Swedish NGOs have adopted a policy to address alcohol in their development work as obstacle to development. Alcohol is no ordinary commodity.

– Sweden has one of the best alcohol regulations in place in the world, using much of what the WHO is recommending in the Global Action Plan on NCDs and in the WHO Global Alcohol Strategy.

– Sweden has been thriving in 200 years of democracy where popular movements like the trade unions, the temperance movement and the women’s rights movement have earned tremendous merits in helping to build the Swedish welfare and democracy. The Economist ranked Sweden in 2013 second highest on its Democracy Index.

Big Alcohol and Big Tobacco are using trade talks more and more aggressively to erode  and circumvent public health policies. It is in this context that journalists must perform a better job in being a watchdog of decision-makers and the government must realise – once they wake up from the day dreaming about Obama – that boundless trade does not propel development and welfare but threaten and erode it.