by Sven-Olov Carlsson Posted on October 28, 2013 in
Alcohol Industry, Policy

IOGT International has joined a broad coalition of 14 public interest groups today in delivering a letter to members of United States Congress, urging U.S. lawmakers not to grant the Obama administration “fast-track” authority for trade agreements, including the Trans-Pacific Partnership Agreement (TPPA)…

IOGT International has joined a broad coalition of 14 public interest groups today in delivering a letter to members of United States Congress, urging U.S. lawmakers not to grant the Obama administration “fast-track” authority for trade agreements, including the Trans-Pacific Partnership (TPP). 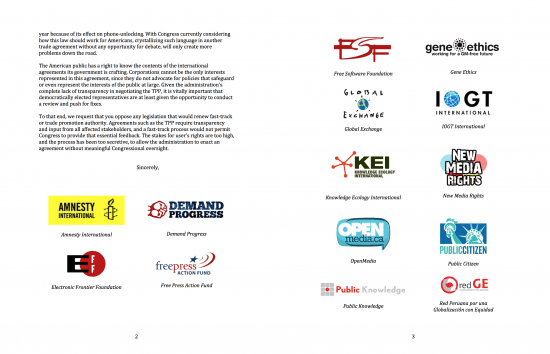 For democracy, transparency and accountability

The TPP is a complex multi-national agreement that could extend restrictive laws around the world and rewrite international rules of copyright enforcement in ways that could further restrict online rights.

Fast-track authority, also known as “trade promotion authority,” requires Congress to waive its Constitutional authority to review treaties, limiting its ability to seek fixes and amendments. In the case of agreements negotiated in near-total secrecy, like the TPP, granting fast-track authority would create a dangerous lack of accountability – and it would seriously undermine democracy and societies’ ability to put in place public policies protecting common interests such as public health and well-being.

I am proud that IOGT International stands with the following organizations for democracy, accountability and policy-making in the interest of the whole society, not only global corporations like Big Alcohol.

The American public has a right to know the contents of the international agreements its government is crafting. Corporations cannot be the only interests represented in this agreement, since they do not advocate for policies that safeguard or even represent the interests of the public at large. Given the administration’s complete lack of transparency in negotiating the TPP, it is vitally important that democratically elected representatives are at least given the opportunity to conduct a review and push for fixes.

Agreements such as the TPP require transparency and input from all affected stakeholders, and a fast‐track process would not permit Congress to provide that essential feedback. The stakes for user’s rights are too high, and the process has been too secretive, to allow the administration to enact an agreement without meaningful Congressional oversight.”

It is possible these concerns have been addressed, but given the lack of transparency, the public cannot be sure. The public needs to play a role in the process, and one essential component of that is that the US Congress, like other democratically elected parliaments in other countries dealing with the TPP (and other free trade negotiations, for that matter) must be in the loop.

Barack Obama came to power on a wave of hope and change. We all still remember 2008. But in trade matters his administration is not fostering democracy and is actively working against public health interests, the rights of children and human rights in general. In pushing for fast-track authority, the Obama administration has sought to strip another layer of transparency and accountability out of the trade agreement process. It is therefore that we in IOGT International support this letter calling for the US Congress, as elected representatives of the public, to work to bring that transparency back.