This blog looks at recent work by two scientists and answers: How has the corporation been able to increase profits given the rest of Congo has progressively disintegrated to the extent that some Congo experts argue the country doesn’t even exist? How is it possible that during one of the world’s fiercest conflicts, the Heineken subsidiary ‘did not stop producing during the conflict and has experienced an upswing in sales’, as the New York Times reported? How is it possible to operate in the Congo without becoming entangled with the plethora of conflict actors that prey on anyone with money in the country?

In the Democratic Republic of Congo, many say a failed state and some say a non-existent state – anyone, no matter the age, can get a beer anywhere, anytime. To be more precise, anyone can get a Primus. The saying of the locals is: “You can bomb a hospital, but not Bralima.”

Bralima is the brewery dominating the Congoloese market and belongs to one of Big Alcohol’s giants: the Dutch Heineken Group. Bralima was founded in 1923 and has since then maintained presence throughout the devastating history of the country, which gives it an exceptional an unique role in the country today. From brewing Primus for Belgian colonials, Mobutu’s Zairian elite, and the many factions part of what came to be known as ‘Africa’s First World War’ Bralima was involved. Therefore the scientists Peer Schouten and Jason Miklian set out to find out how Heineken has been able to keep these operation running and even growing despite the vast challenges and dangers of operating in the DRC.

It’s important to bear in mind that this really is an example of how a multinational corporation part of a global industry made up largely of corporations from the West chooses to operate in the developing world. Bralima in the DRC came to its dominating position under the reign of the Dutch Dolf van den Brink and his tactics of:

In addition to its contracts with celebrities, the brewery has exclusive deals with 68.857 bars in Congo. And seemingly hand-painted signs for Primus seem to cover every surface in the DRC, making Bralima’s slogan Toujours Leader! (‘Always the Leader!’) into the most-read phrase in the country.

Van den Brink is today the CEO of Heineken USA.

To cover the other two dimensions of his tactics the scientists Schouten and Miklian asked themselves: “How has the corporation been able to increase profits given the rest of Congo has progressively disintegrated to the extent that some Congo experts argue the country doesn’t even exist? How is it possible that during one of the world’s fiercest conflicts, the Heineken subsidiary ‘did not stop producing during the conflict and has experienced an upswing in sales’, as the New York Times reported? How is it possible to operate in the Congo without becoming entangled with the plethora of conflict actors that prey on anyone with money in the country?”

The answers they found can be categorised in three ways, which entangle both the rebel forces as well as public forces: taxes, customs, security.

During the war the rebels of the RCD-Goma terrorised Kivu region. Heineken acknowledged them anyway as authority and payed taxes to the rebels. 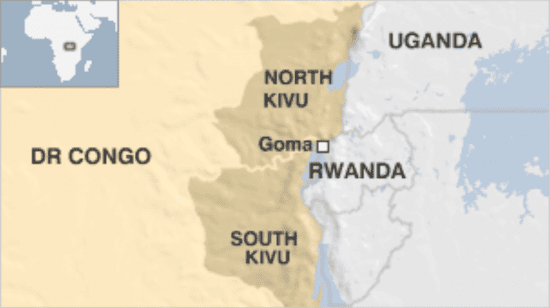 The report of the Lutundula Commission for the Congolese National Assembly, that was commissioned to investigate fraudulent contracts signed during the Congo Wars, describes in detail the ‘protocol agreements’ that were allegedly drawn up between Bralima and RCD-Goma rebels during the period 1998-2003. This investigation of the Congolese parliament depicts that the rebels cashed in $5.50 per beer and additionally collected “provincial tax” of 18%. That leads Schouten to conclude that Heineken has been structurally linked to armed rebels.

Usually multinational corporations contract private security companies despite the problems in knowing what kind of security one is actually purchasing and what kind of methods are being employed to deliver “security”. So is the case for Heineken: There is a private security company working for Bralima called Top SIG. This company is a subsidiary of Saracen International, as Schouten writes, referring to  a corporate presentation by one of Saracen’s founders.

The UN has condemned Saracen for transgressing a UN embargo on military training and supplies to Somalia. The Heineken Group is, through its subsidiary’s engagement with Top S.I.G, entangled with conflict actors, illustrating the risks involved in using transnational private security companies.”

Anyone who followed the conflicts in Congo knows that violence in Kivu region did not stop with the peace agreement in 2003. And neither did the payments of Bralima, Heineken-Group, to the armed rebels cease. Additionally, Bralima is employing soldiers and police as security for its facilities in Goma and Bikavu.

To the date, rebels are earning vast amounts of money from their road checkpoints. One example that both Schouten and the German Spiegel Online, a news magazine, are citing is the rebel group M23.

… a taciturn Rwandan calling himself Mr. Damien, ‘tax collector’ for M23. Damien explained that he charges $38 for a van to pass, $300 for a medium-sized goods truck, and $700 for a fuel tanker, handing out official-looking receipts for payment. […] Mr Damien insisted that anyone pays—including Bralima’s logistics subcontractors that have to pass through rebel occupied territory to deliver Primus beer to some of the thousands of retail locations.

Drivers leaving for rebel areas are given extra cash to cover these payments, a security officer at one of Bralima’s main distribution depots in eastern Congo told us.”

According to Miklian’s and Schouten’s calculations, Bralima distributors could be paying more than $1 million a year to rebel groups, that can thus  afford weapons, ammunition and pay for the fighters to combat against the government army.

Miklian is quoting Bralima in this context saying that Heineken in Amsterdam was not interested in HOW the profits where made:

What matters to Heineken are the sales. Everything is fine as long as we fulfil them. There’s trouble if we do not.”

The aggressive tactics employed by van den Brink have made him climb the career ladder and have led a country to the brink of total collapse. Not to mention the public health and societal costs of the gigantic, aggressive markting, we can see today that the intricate distribution system for the Heineken product and the paramount payments to conflict parties have been profitable for a corporation and disastrous for a country, its people and the region around.

Should Heineken “do business” in crisis regions? How come Heineken can propagate social responsibility when it has been financing armed conflict? In 2006 it was proved that Heineken used forced labour in Myanmar. It subsequently left the country.

As bad as it is and as obvious as the ruthlessness of the thirst for profit is, I think there is another crucial take-home lesson: This whole issue magnifies the problem we know from other parts of the developing worlds, too: Alcohol is an obstacle to development and IOGT International together with its member organisations is working on tackling this obstacle to foster and promote development. We know that Big Alcohol has no role to play in developing societies. Two main reasons:

Alcohol is obstacle to development

Its operations run fundamentally against  everything we know today about alcohol harm and how it contributes to violence, ill health and burden of disease, the perpetuation of gender inequality and poverty, the exploitation of water and food resources and the undermining of the functioning of communities and families. Alcohol is a very harmful product in many ways – and it would have been necessary for Schouten and Miklian to address that issue, too, in their analysis of Heineken’s operations.

Its profit thirst makes it ruthless and merciless. By definition Big Alcohol, like the Heineken-Group, must maximise profits for its shareholders and therefore they can only engage in operations that bring home profit. Human rights, peace or other values that might come need therefore necessarily be disregarded. Big Alcohol has this in common with Big Tobacco, and many other multinational corporations, for example Nestlé (watch: Bottled Life).

It’s therefore high-time to challenge and ultimately alter this apparent, new consensus among western donors, that multinational corporations are supposed to contribute to peace and development in volatile environments, amongst others by generating taxes, creating employment, and producing surplus wealth that translates into demand for services.

Alcohol contributes to loss of productivity, huge costs to the economy and society at large and burdens children and young people disproportionately. Alcohol is simply bad for development and sustainable societies. But corporations are happy to echo this idea of their role in development, not least because it opens marketing opportunities and legitimizes their expansion into new untapped consumer and producer markets. Heineken is just one example of the aggressive attempt to cash in on poor countries’ needs. They termed their slogan: “Brewing a better future”.

The case of the DRC shows however, that in order to tap the Congo market and flood it with beer, Heineken oversteps the boundaries of the permissible, the limits of ethics and Human Rights.

Schouten thus writes that “the liberal peacebuilding rationale of economic exchange and liberalization that has been codified amongst the international community’s most important players […] are untested and unproven [as policies] within fragile countries, which is why both academics and activists are increasingly concerned that they are exacerbating many of the greatest pressures that today’s global poor face.”

Big Alcohol cannot be “Brewing benefits”. They are brewing violence, war, Human Rights abuses and the perpetuation of the vicious cycle of poverty.

Paper in PDF: Heineken’s engagement with commercial conflict-dependent actors in the Eastern DRC

Real Reasons Why Alcohol Use Among African Youth Is Rising