It’s International Day for the Elimination of Violence against Women and we are spearheading a global coalition against violence against women, especially alcohol-violence and for the equality, freedom and empowerment of women and girls…

IOGT International is actively engaged in the United Nation’s Say No UNiTE campaign and thus we also take actions during the 16 days of activism and the #OrangeYourWorld campaign. It kicks off today, on 25th of November, the International Day for the Elimination of Violence against Women.

Our Inspire Freedom campaign fits perfectly into the UN concept and I think it is of fundamental importance to both highlight the role alcohol plays in gender-based violence as well as to step up action to prevent and eliminate violence against women and girls.

In this spirit have we gathered a global coalition of heart-driven experts on the subject: how to use community action, advocacy and education to make the world a better place for women and girls – more equitable, free and inclusive.

Here’s our video for “Every 25th and alcohol free day“ 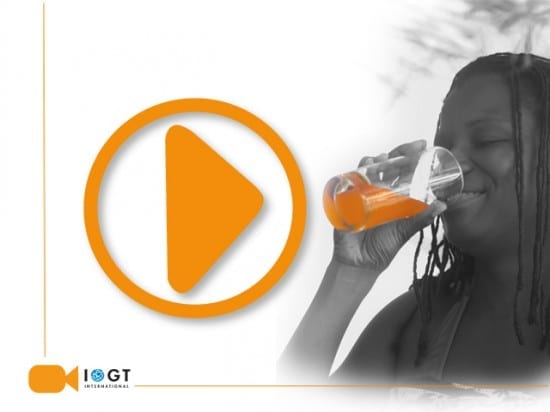 BERLIN, GERMANY, (November 25, 2013) — Violence against women and girls is often alcohol-related. But alcohol violence can be prevented if civil society and decision-makers take effective action together.

A global coalition of civil society organizations spearheaded by IOGT International is leading the way in stopping the excuse of alcohol violence against women and girls, in implementing concrete, grass-roots actions for the creation of more alcohol-free, save environments and in empowering women and girls.

November 25th is the “International Day for the Elimination of Violence Against Women.” It is the day when awareness is raised of the pervasiveness of violence against women and commitments are being made.

For example, in many places around the world gender-based violence is alcohol related in up to 80% of the cases. This violence can be prevented.”

Some more facts tell the story:

Looking at the world through the eyes of women and girls, we must see that our world has an alcohol problem and that if we don’t solve it, we will not achieve equality and freedom,” added Sperkova.

Additionally alcohol is often used as an excuse for otherwise socially unacceptable behavior. Sexist comments, jokes and behavior of harassment are excused when the perpetrator has used alcohol. This way, social norms are flouted and a culture of discrimination against women and girls is perpetuated. Aggressive alcohol marketing plays its part in the perpetuation of gender stereotypes by portraying women as objects often sexualized and degraded.

IOGT International, together with a global coalition of civil society organizations, commits wholeheartedly to the implementation of concrete actions that deliver change.

Our actions are simple and linked to grass-roots activism to make a difference for women and girls in the communities,” explains Sperkova.

We arrange events like silent discos, photo shootings and poster pastings. We arrange meetings with decision-makers and we speak against excuses for alcohol violence.”

Such is the vision of the global coalition to inspire freedom and allow the local, no matter how remote, and the simple action to unfold to become a global force for good, for freedom and equality of women and girls.

Statements by the global coalition on the occasion of the International Day for the Elimination of Violence Against Women:

World Association of the Clubs of Alcoholics in Treatment (W.A.C.A.T.):

CLUBS OF ALCOHOLICS IN TREATMENT are a community program where families find a safe environment, where alcohol related problems can be overcome and where violence within the family can be discussed and progressively eliminated. The Clubs` family approach has the immediate effect of changing the lifestyle in the family and also in the community,” said Ennio Palmesino, Chairman of W.A.C.A.T.

As we observe the International Day for the Elimination of Violence Against Women, EAAPA emphasizes the need to address the strong link between alcohol use and the abuse of women and girls,” said Moses Waweru, chairman of the East African Alcohol Policy Alliance.

A review of Demographic Health Surveys of 7 Sub-Saharan countries (Borwankar R., Diallo R., and Sommerfelt A.E. 2008) clearly showed a correlation between alcohol abuse and domestic violence. For instance in East Africa, among women from Kenya, Rwanda and Uganda, increasing use of alcohol and drunkenness by husbands, has been found to lead to increases in physical violence.

The weakening of alcohol regulations in India on state level, has created a favorable atmosphere for all sorts of human rights violations,” stated Thangavel Velandi, National Secretary of the Indian Temperance Youth Federation.

Due to that millions of women, girls and children of alcoholics have become victims. Hence it is also the prime responsibility of the state governments to provide appropriate support services for all victims.

Alcohol-violence makes the home as well as public spaces too often very unsafe for women and girls. And this is a grave concern for us because it’s a violation of human rights, an obstacle to equity and equal opportunity for women and girls and it hampers India’s overall development.

Both the state governments as well as the national government need to act swiftly to put in place evidence-based, high-impact alcohol regulations, in order to sustainably tackle the problem of violence against women and girls,” Velandi emphasized.

The alcohol industry blocks effective alcohol policies that would reduce the amount of sexual, physical, and mental violence to women, while it promotes alcohol products with ads that objectify, sexualize, and infantilize women. Looking at it this way, alcohol-related violence against women is a human rights issue. So is preventing it,” Mart added.

Today we join with our global partners to call specific attention to the alcohol-related physical, sexual, and emotional abuse of women and to call for action to support evidence-based strategies to reduce this harm. We demand increased prices, reduced advertising and promotion, and the removal of alcohol products from any free trade agreements.”

Concrete actions are needed from governments, other stakeholders who have the possibility to make a difference. Violence against women is a global pandemic and violence caused by alcohol abuse can be prevented,” Lindstad emphasized.

Societies today aim to nurture a culture oriented towards achieving equality, peace and equal rights. Yet the realization of this aim is facing obstacles in many forms, out of which violence against women and girls is one – an obstacle which is very tightly related to alcohol use, an obstacle which is very often excused because of alcohol use,” said Maja Stojanovska, Secretary General of Active – sobriety, friendship and peace.

On the International Day for the Elimination of Violence against Women, we remind and reflect on the need for more alcohol-free environments. And we call for the rest of the 364 days in the year to be devoted to creating these environments, to inspiring freedom for women and girls,” Stojanovska added.

Note to the editor:

IOGT International is the largest worldwide community of non-governmental organizations with a mission to independently enlighten people around the world on a lifestyle free from alcohol and other drugs.

W.A.C.A.T. works to improve the quality of life on earth, by promoting and protecting the health of all individuals, the families and the communities on this planet, in particular through the prevention and reduction of the alcohol related problems worldwide, by promoting the development and the dissemination of the Clubs of Alcoholics in Treatment (CAT) and of the social-ecological approach to the alcohol related and mixed problems.

The East African Alcohol Policy Alliance (EAAPA) is an alliance of civil society organizations across East Africa working together to build a comprehensive system of evidence-based policy, legislation and regulatory measures to address alcohol related harms.

About FOKUS – Forum for Women and Development:

FOKUS – Forum for Women and Development – is a knowledge and resource center for international women’s issues with an emphasis on the spreading of information and women-centered development cooperation. FOKUS’ primary goal is to contribute to the improvement of women’s social, economic, and political situation internationally.

About Active – sobriety, friendship and peace:

Active – sobriety, friendship and peace is a European youth umbrella organization gathering 31 organizations from 24 different European countries. Active engages more than 25 000 young people, all united in what they promote and practice – a lifestyle free from alcohol and other drugs.

Active’s work focuses on stimulating the potential of young people through promoting a lifestyle free from alcohol and other drugs and creating free, safe and inclusive environments for all young people and children .