In this context it is fantastic news that SAAPA is coming out in strong support, and the momentum keeps growing…

It’s International Day for the Elimination of Violence against Women. And today, I am sure you have seen it, we have issued a joint press release together with six other national, regional and international NGOs – together covering the whole world and together calling for increased alcohol prices, banned alcohol advertising, more alcohol free environments and the removal of alcohol products from free trade agreements to help reduce alcohol-related violence towards women and girls. 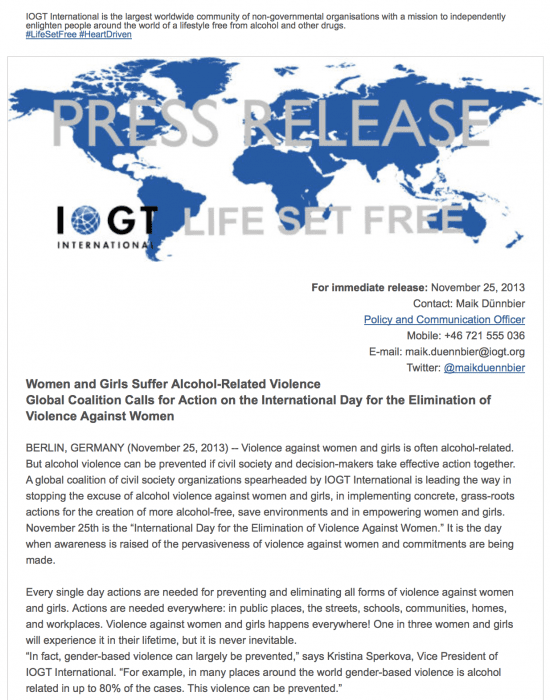 Alcohol-violence is in some parts of the world one of the biggest obstacles to equality and freedom and a paramount hinder for development. In this context it is fantastic news that SAAPA is coming out in strong support. In their press release they write:

“The Southern African Alcohol Policy Alliance (SAAPA) welcomes the initiative by IOGT to strengthen partnerships to bring awareness to this issue but also put into action proposed strategies to minimize the risk of alcohol related gender-based crimes in society.

“Gender-based violence (GBV) is a persistent international public health problem that is very common yet not fully acknowledged.

“In South Africa, between 67 to 76% of reported cases of domestic violence are alcohol-related. Furthermore, men who admitted to heavy problem alcohol use were twice more likely to have a history of violent acts committed against their partner.

“We support this initiative of increasing awareness of alcohol-related gender-based violence. Primary strategies to curb the misuse of alcohol can be utilised through the promotion of evidence-based alcohol policies to influence individual behaviours and risk producing environments. SAAPA is primarily committed to voicing strong alcohol policies and build an effective advocacy network to influence the Southern African region.” 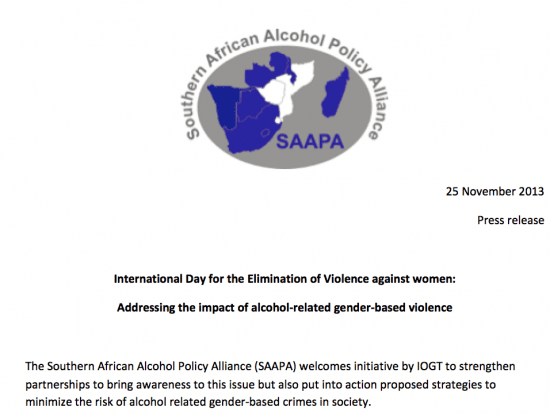 Such is the support of Savera Kalideen, who is the chairperson of SAAPA.

Alcohol-related violence against women and girls is truly a global issue. Last week I had the pleasure and privilege to attend two workshops with Lori Heise, that IOGT-NTO arranged in Stockholm. Lori also told the story of women in Northern, rural India who name as their greatest burden gender-based violence. 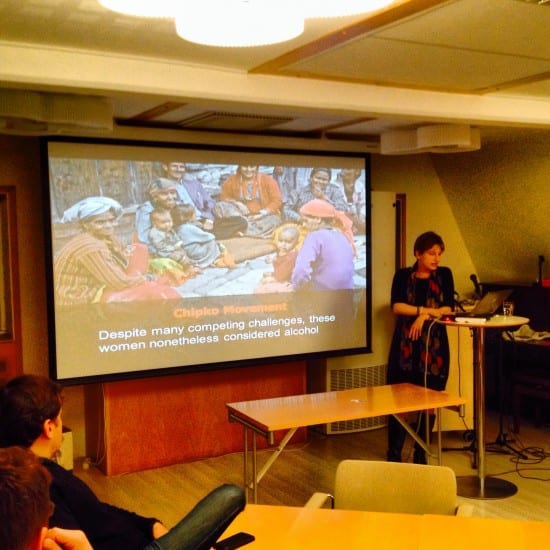 Alcohol harm, like alcohol-violence, is an obstacle to gender equality and thus sustainable development around the globe, Lori Heise of STRIVE #HeartDriven

In our booklet called “Alcohol culture in gender zoom” we analyse some of the connections of male domination over women, alcohol culture, alcohol-related violence, alcohol marketing and other factors that play a role.

The evidence of the harm, the evidence about the causality and the evidence about what measures work effectively in preventing and reducing gender-based violence all are clear and well researched. We know what needs to be done. What’s lacking is the political will to do it (which also is linked to Big Alcohol mounting pressure not to do anything). 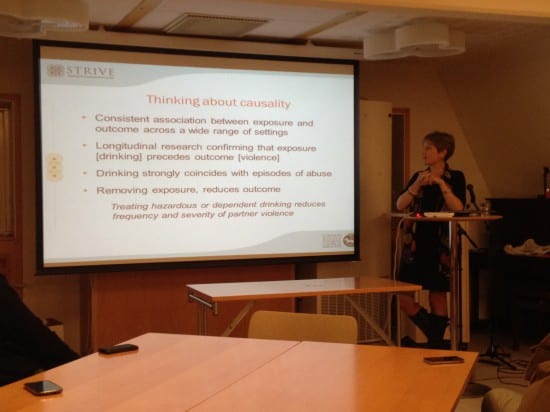 In our press release, Moses of EAAPA mentioned some of the evidence. And Savera of SAAPA addressed some more facts, too. Also in Europe, through Active, the facts are being brought to the public’s and the decision-makers’ attention as Sven-Olov showed by posting a video that Active had produced.

On the eve of CSW57 we also issued an oral statement addressing the Commission on the Status of Women and we had support from decision-makers in Europe, Asia, and Africa for it. 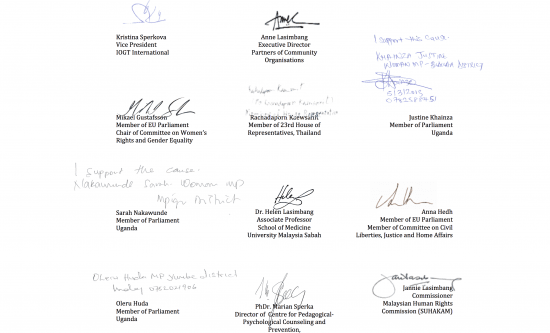 I had a nice twitter exchange this year at CSW57 with the Norwegian Minister for Gender Equality and Women’s Issues that shows that political awareness is there. 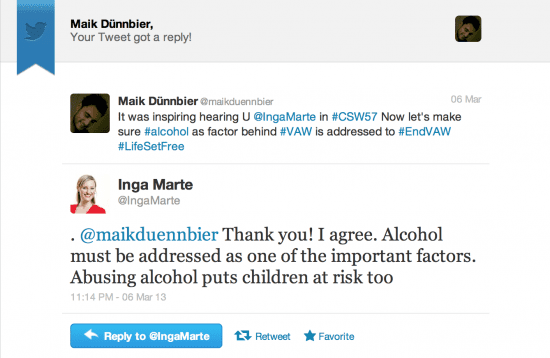 I am happy to see and to be part of the tearing down of borders between different fields of activism, like the public health community, the women’s rights and Human Rights community, the alcohol policy community – and I am glad that we together manage more and more and better and better to address decision-makers around the world.