What Do US, Germany And Finland (Not) Have In Common?

by Maik Dünnbier Posted on January 10, 2014 in
Policy, Prevention

What political will to implement alcohol policy (or the lack thereof) can (not) accomplish in terms of saving lives, improving the economy, promoting health and well-being…

The obvious answer, at least according to media reporting these days, is: a spying scandal. As far as I know, that is, there is no NSA scandal in Finland but it is all the bigger in Germany and the USA.

The much less obvious answer is alcohol harm. All three countries do have to deal with a substantial burden of alcohol harm – in terms of health, social and economic costs – although one of these countries is doing much better than the other two with regard to tackling the burden of harm.

Consider the latest report from the Centers for Disease Control and Prevention (CDC) for instance: Alcohol intake is linked to about 88,000 U.S. deaths each year. The CDC estimates “heavy” alcohol use costs the American economy about $224 billion when taking into account health care costs, property damage and lost work productivity. And according to the CDC, there’s a lot of heavy alcohol users: ca. 38 million Americans use alcohol excessively and most of them are not alcohol addicted, according to the new Vital Signs report, which included national survey data collected in 2011. Those numbers are similar to a CDC report issued two years ago.

[Consuming] too much alcohol has many more health risks than most people realize,” CDC Director Dr. Tom Frieden explained.

Alcohol screening and brief counseling can help people set realistic goals for themselves and achieve those goals.”

Under the Affordable Care Act (ObamaCare) alcohol screening and counseling can be covered free of charge by most health insurance plans. And it works: Evidence shows that such health service intervention can reduce alcohol use by 25% among heavy alcohol users*. 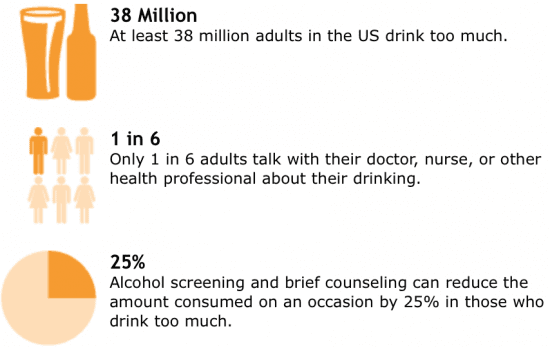 Dangerous amounts of alcohol intake, that’s what Germany has in common with the Atlantic neighbour. Consider the latest findings from the “Addiction Survey”:

The authors of the German study conclude: “The distribution and amount of mental disorders due to alcohol and tobacco makes the implementation of effective prevention measures obvious.”

Some of the most effective prevention measures are known as Three Best Buys: 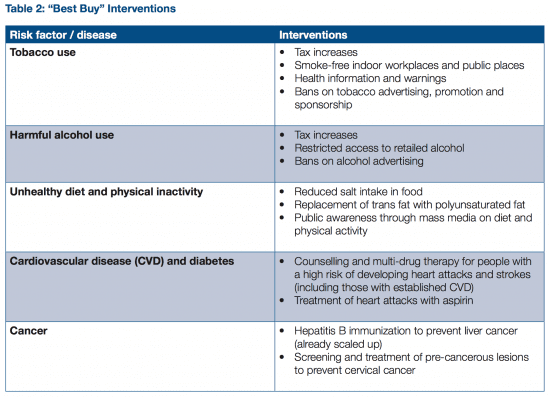 Finland tested these measures in 2004 in a real life experiment with its own citizens: it dramatically decreased alcohol taxes; for instances the tax on liquor was lowered by 44%, while the beer tax decreased by 32% and wine by 10%. And the effects were immediate and shocking: the alcohol intake increased from 9 liters per capita per year, till 10.5 in 2008. That caused more deaths, more addictions, more health care costs due to diseases, and loss of productivity.

Therefore in 2007, the Finnish government decided to increase taxes on alcohol again. In the years after that, more tax increases were successively put in place. Even this year in January a tax increase became effective. Finland also made use of some of the other measures of the Three Best Buys: the government decided for restricting alcohol marketing as well as for shorter opening hours of the alcohol retail monopoly.

These measures have been and continue to be a success story. In the recently published Alcohol and Drug Statistics, we can read that the alcohol intake in Finland is decreasing, from 10,1 in the year 2011 to 9.6 litres of pure alcohol per capita in the year 2012.

With this decrease in alcohol use, there follow some more positive consequences:

In the USA, after the re-election of President Obama, there was not even a mentioning of a tax-increase on alcohol, albeit the fact of a de facto cheapening of alcohol in the USA due to inflation. The newly elected and formed coalition government in Germany has not mentioned alcohol harm at all in its coalition agreement either and has yet to appoint a new Federal Government’s Drug Commissioner. In those two countries, where Big Alcohol is very powerful, alcohol harm is largely being ignored – despite the evidence and the increasing problems and costs caused by alcohol.

Finland shows the way: it shows that alcohol policy measures are cost-effective and high-impact. And it shows the difference political will can make.

*There is NO safe amount of alcohol use. No matter the kind of alcohol consumed, there’s no amount of intake that is free from health risks. Alcohol is terratogenic, toxic and carcinogenic.

Institute for Health and Welfare, Finland: Yearbook of Alcohol and Drug Statistics 2013

WHO and World Economic Forum: From Burden to Best Buys