Just a few days ago, the global football community awarded the best female and male coaches and players. And the winner for the Fifa Golden Ball, the world’s best footballer, was named Cristiano Ronaldo, of Real Madrid.

It’s the second time he has won the Ballon d’Or, being named the world’s best football player. Ronaldo had produced another stellar year, scoring goals at a ratio of over a goal a game, he became the quickest Real Madrid player to reach 200 goals for the club and he seemed to be able to find new realms of magic almost every time he took to the football pitch.

How much this award, being named the best player in the world, meant to him can be seen in the reaction of his wife, his mom and himself. Ronaldo was emotional:

First of all I have to say a great thanks to all of my team-mates with the club and the national team,” he said.

Ronaldo is known for working extremely professionally, meticulously and dedicated at his craft. Part of Ronaldo’s success story is of course his choice to enjoy life as a professional footballer free from alcohol.

His father died from alcohol-related ill health, after having been alcohol addicted, in 2005. Like millions of children around the world, and other top athletes included, he had to grow up with alcohol harming his family. Additionally Ronaldo is highly aware of the fact that alcohol is harmful to his body and therefore to his carrer as football player and his goal of being the best player in the world.

Alcohol harms every organ of the human body. It is a toxic that makes recovery harder after physical performance, drains the cells of water and weakens the immune system. It’s associated with more than 60 diseases and conditions of ill health. Simply put, it’s no good.

That’s why Ronaldo together with Fifa has also launched this video: “Avoid drugs and alcohol”.

This video is part of the Fifa campaign “11 For Health“. Fifa explains the campaign this way:

Alcohol is one of four major risk factors for lifestyle diseases, also known as NCDs. It’s linked to cancer, diabetes, heart disease, to HIV/ Aids, poverty and violence against women and girls – many of the issues addressed by “11 For Health”. 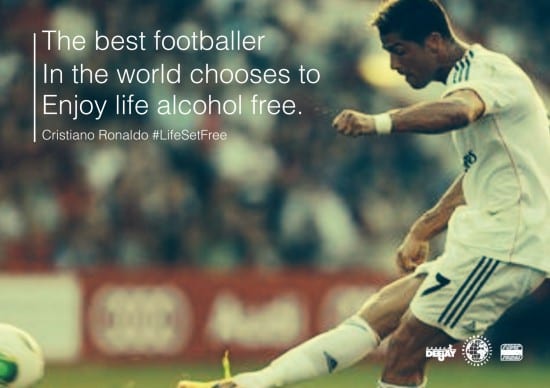 How come that the best player in the world fullfils this tremendous role model function, Fifa on the one hand seems to be aware of the harm linked to alcohol use but on the other, we see alcohol marketing all over football stadiums and Fifa competitions, and a lot of alcohol use inside and around the stadiums?

Something doesn’t add up and a simple google search tells the story: 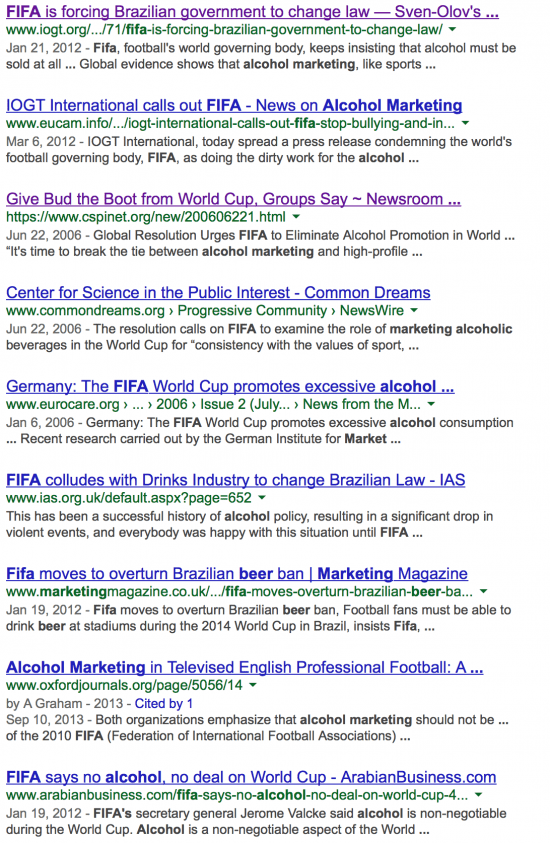 Since 2006 at least, Fifa has been under fire for the aggressive alcohol marketing that children and young people are exposed to. That makes for three World Cup competitions and three Confederation Cup competitions, plus a myriad of qualifier and friendly matches. Huge exposure of children and youth to alcohol marketing, which explains the remainder of the google search result list: 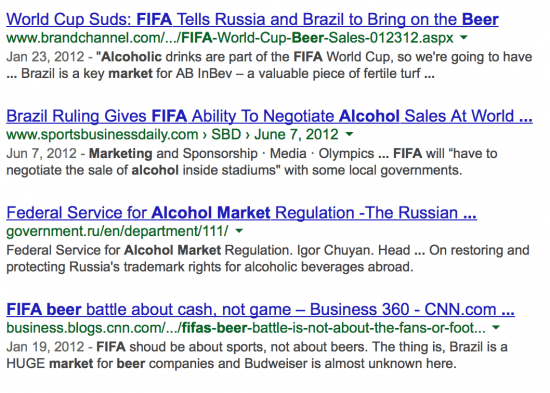 The Fifa “beer battle” is about “cash, not game.” Or this headline: “Fifa tells Russia and Brazil to Bring on the Beer”. We addressed the issue in Brazil during 2012 and 2013 as Fifa was doing the dirty business for its well-paying sponsorship buddy Anheuser-Busch InBev.

Football has long been known as having an alcohol problem – ranging from the lowest leagues to the biggest stars, from coaches to supporters, and alcohol fuelled violence. The German Spiegel Online has published a number of articles on the subject of the intoxicating culture within football clubs, especially harming youth players, in recent years. And we all see the headlines notoriously reoccurring of fallen stars because of alcohol addiction.

So, Fifa knows the harm caused by alcohol on all levels and in all dimensions of the game, especially affecting children and youth – who they target with their “11 For Health” campaign. Fifa also has this transcendent star in Cristiano Ronaldo to promote a healthy lifestyle, free from alcohol and free to enjoy football and life.

And yet Fifa opts for the money that Big Alcohol pours into the bank accounts, ridiculing its own prevention campaign. 11 for health – okay, but millions in profit – matching!

Continuing this sponsorship deal, and pressuring governments to change their laws in order to promote alcohol are tactics to target children and youth with alcohol marketing, only to profit from children who take up alcohol use at an earlier age; from a culture that glamorises alcohol and is taught to associate football with alcohol.

If only Ronaldo could something about that…

Scientific paper from 2010 about “The right of children to be protected from Narcotic drugs and Psychotropic substances. A Human Rights/ International Law perspective”

Our press release from 2012: Fifa For Violence. And the blog entry that belongs to it, featuring evidence about Publi Health and alcohol policy regulations in Brazil.

A comprehensive list of material and newspaper articles on alcohol, violence, football violence and alcohol and injuries and alcohol can be found in my previous blog entry, too.

“Drinks, drugs and thugs“, 2001, by the Institute of Alcohol Studies, London

WHO facts on “Alcohol and Youth violence“

Report: “Reducing harm in drinking environments. Evidence and Practice in Europe” and a fact sheet

The harm of alcohol marketing