by Maik Dünnbier Posted on January 27, 2014 in
Prevention

I’m often very critical of the music industry. But today, is a happy day and the Grammys – the Oscars in the music business – are to be thanked for that. Who would have guessed?

I grew up loving the written word, loving the spoken word and loving rap. To me it was poetry and rhythm, the most sublime way of combining philosophy and beats.

I listened to German, French, some English and mostly American rap. And like in many love stories – at least for all those that Hollywood tells us about – also in mine with rap music there came a crisis, a period of critical assessment with the entire music industry in general and rap music in particular. All the aggressiveness and often hate, the materialism, the alcohol, the derogatory speech about women and girls just became intolerable.

I made efforts to find rap that still was about the magic of words, of rhymes, of rhythm and that dealt with social issues. I searched for rap putting in words what’s good and bad in the world – and I found some: From Sweden I found Promoe, his song “Long distance runner” becoming my anthem.

From the US, I found Lupe Fiasco and found deep inspiration in his: “The words I Never said”

So, you understand that over the years my little library of powerful, truthful and inspiring rap songs has grown and has been well taken care off, like those precious Bonsai that were handed to you as a present and that grow like a promise of trust.

I’m often very critical of the music industry. My impression is that those artists I am sharing songs of here, are rare, are precious and often overshadowed by those that produce scandals and headlines but not necessarily better music and art. The music industry, the labels, the media broadcasting it, many artists play a strong part in perpetuating harmful behaviour and culture – just consider the glorification and glamorisation of alcohol.

But today, is a happy day and the Grammys – the Oscars in the music business – are to be thanked for that. Who would have guessed?

Macklemore is a 30-year-old rap artist with a history of addiction to alcohol and cough syrup. He is not only not glamorising getting alcohol use and intoxication but even takes an active stands for prevention messages and inspiring role model, urging his audiences to embrace the lessons of his mistakes. 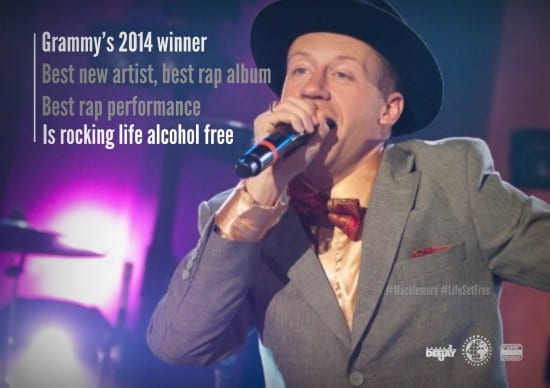 As the blog on Drugfree.com puts it:  “… a famous rapper is helping make prevention cool. What was most surprising to me is that Macklemore isn’t just ‘some guy.’ He is one of the most famous and well-respected rappers of our time. His last album, ‘The Heist,’ went platinum. That’s right — thanks to Macklemore, my generation is paying to download songs about prevention.”

The song “Starting over” is a powerful message about life set free, from the burden of addiction and life set free to live up to one’s potential and rock one’s craft – like Macklemore:

As I think of all the inspiration and hope, the conviction and motivation that rap has given me over the years, I explore Macklemore’s lyrics and the heart-driven messages of his rhymes conveyed, and I cannot but feel that a better world is possible, that richer lives are within reach.

On the Outside Looking In