by Sven-Olov Carlsson Posted on May 14, 2014 in
Alcohol Industry, Alcohol's Harm To Others, Corporate Consumption Complex, Policy, Prevention, Sustainable Development

This football tournament is no people’s party. It’s a costly corporate bonanza. First, Fifa and the alcohol industry bully the Brazilian government to reverse a law that succeeded in protecting people. The consequences will be rising costs of alcohol harm. At the same time, Fifa and its corporate partners have made sure they will not have to pay for any of these costs… They are exempted from any taxation…

I am in Sao Paolo, Brazil right now. It’s beautiful here and none can escape that the Fifa football World Cup is only a few weeks away from completely taking over South America’s biggest country.

Brazil and football, that is a special combination. It’s passion, freedom, emotion, creativity. It’s huge successes in global tournaments and it’s dreams come true of players escaping poverty and reaching global stardom. But it is also violent supporter rivalry, alcohol-fueled violence in and around arenas, clashes between supporters and the police, corruption…

In 2003, a ban was instituted to keep alcohol out of Brazilian football stadiums and to control and prevent the raging violence. Many people I’ve spoken to here consider this ban a landmark achievement of social progress. And evidence shows it was a big success. In the state of Minas Gerais violence was reduced by 45% in the first year of the ban. The state of Sao Paolo had already put in place the same ban in the end of the ’90s and reduced violence by 30% in the first year. People tell me that the atmosphere around matches and in the public improved, that more families and more children started attending the matches again. Brazilians understood in the time around the new millenium that alcohol and football do not belong together, that football free from alcohol was more enjoyable for many more people. Since 2003 Brazil had made huge strides in reducing and preventing alcohol harm. In course, attitudes towards alcohol have been changing.

All this is over now. When the World Cup enters the newly constructed, modern stadiums in a few weeks, what will enter with it is the alcohol of old. Due to aggressive pressure by Fifa and the alcohol industry, the alcohol ban was lifted.

The Fifa of 2014 has not yet realised what Brazilians understood and the unholy alliance of Fifa and Big Alcohol pushed through a law that clearly shows this World Cup is for the profits of corporations, and against the Brazilian people. In this context a quote by Jérôme Champagne, former Fifa executive, deserves consideration:

… in the past twenty years, football has not been immune, insulated, and so different from the rest of the universal systemic trends of our world, notably the ‘triumph of greed’ as defined by Economics Nobel Prize recipient Joseph Stiglitz.”

Those of you who followed my work with IOGT International on this issue are well informed. We’ve issued press releases, formed a global coalition to give childhood a chance in Brazil and engaged in active advocacy to protect the law, only to realise that Fifa and the alcohol industry are totally disregarding the well-being of the people. They have something completely different in mind. That’s what I reveal in this blog entry.

Not only did Fifa do the dirty work for the alcohol industry in reversing a law that had such positive effects for Brazilians, just to boost the profits for itself and AnheuserBusch-InBev, the world’s largest beer producer. But Fifa is acting like a “colonial master of the 15th century” as Professor Chris Gaffney puts it in the documentary by ZDF, the German public-service television broadcaster.

What Prof. Gaffney means are documents like these: “Brazil considering full tax exemptions” for Fifa and its sponsors. The same tax exemptions were given to Fifa and its group of corporate sponsors during the World Cup of 2010 in South Africa, as we found out in the “2010 Fifa World Cup Country Report“.

Fifa operates with the confidence of a multinational, billion-dollar corporation and demands guarantees by any country that wants to host the Fifa World Cup. The example of the Netherlands shows how this works. The Netherlands and Belgium applied together for hosting the World Cup in 2018. Their bid was unsuccessful but today they are not sad about it and the reason for this is explained by Han Kogels, Professor for tax law at the university of Rotterdam. He calculated for the Dutch government what a World Cup would cost and he shows documents to the ZDF that Fifa had preferably kept confidential.

Fifa and the sponsors of the World Cup, like the alcohol industry, do not need to pay taxes…

Fifa demands from every World Cup host eight guarantees. Point three of the guarantee catalogue is Fifa’s demand to be exempted from any kind of taxation. It means that from the time the World Cup is awarded to the host country until the end of the tournament Fifa and the World Cup sponsors like AnheuserBusch-InBev do not pay any taxes in the host country.

Answering the question if such arrangements have ever existed in a free economy, Han Kogels says that this is “a unique situation. Fifa is not abiding by the laws of the respective host country.” The costs of hosting a World Cup would have been between €300 to €900 million in the Netherlands – all paid by the tax payers, not by Fifa. “A very weird sort of situation,” as Han Kogels calls it.

The Brazilian government, after reversing the alcohol ban in the football stadiums, also had to grant tax exemptions for transactions carried out in Brazil by or on behalf of Fifa. Federal Revenue Department officials have estimated that the federal tax breaks associated with the football cups would total around BRL 900 million (about $475 million) between 2011 and 2015. The tax exemptions would apply only to imports carried out by Fifa itself, Fifa’s Brazilian subsidiaries, and companies and entities associated or hired by Fifa to execute the 2013 and 2014 events.Fifa would have to indicate the foreign companies, partners, and entities that meet the aforementioned criteria so they could be expressly listed by the executive branch.

The book “Ambush Marketing and the Mega-Event Monopoly” contains a powerful chapter on “Commercial Rights to Mega Events”, where the authors cite examples of Fifa’s approach to exiting national legislation. 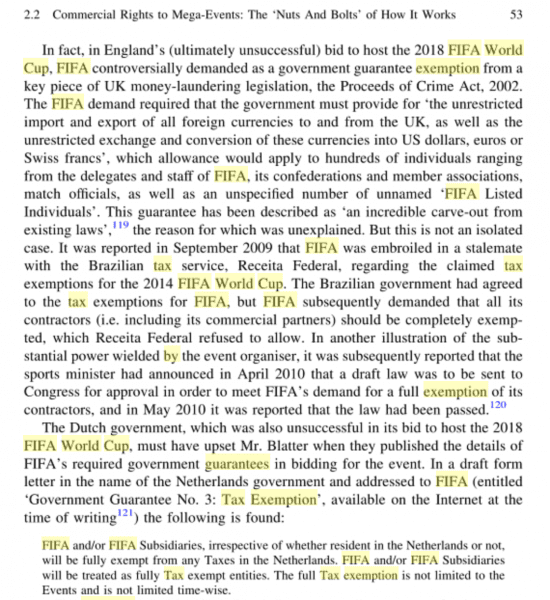 Tax exemptions for Fifa and the World Cup Sponsors, like the alcohol industry.

Here in Sao Paolo, I hear people telling me that Brazilians are planning mass protests for every of the 64 World Cup games. The newspapers in Europe are filled with stories about the absence of the promised uplift thanks to the World Cup. In February, only half of all Brazilians were looking forward to the World Cup. The numbers have been declining for years. Being here in Sao Paolo, I can see what they see: fancy stadiums yes, but broken infrastructure, too, a crumbling health care system, entrenched poverty, disillusioned people.

The people understand that the sponsors of the World Cup, Fifa and the Brazilian government pursue other interests than those of the public good, that stadiums do not educate children; that 64 football matches do not cure diseases and ill-health; that this football tournament is not for their benefit. And like during the Confederations Cup, they are getting ready to protest.

Fifa and the corporate sponsors, however, will hardly notice. Part of the Fifa rules is a two kilometer no-protest zone around the World Cup stadiums. Looking at it all, I must agree with Prof. Kogels from Rotterdam: This is, indeed, a weird situation – to put it mildly.

Fifa and the alcohol industry bully the Brazilian government to reverse a law that was successful in protecting the people and the game of football. The consequences will most likely be rising costs of alcohol-related harm during and after the World Cup. At the same time, Fifa and its corporate partners have made sure that they will not have to pay for any of these costs, nor for any other costs related to the World Cup because they are exempted from taxation. This tournament is no people’s party. It’s a corporate bonanza. And it will be Brazilians bearing the brunt of this bonanza. Football has become a costly game…

“Did Fifa drink too much? Football Association forces Brazil to ban alcohol in the World Cup venues” by Jan van der Kaaij

Jerome Chamapgne “WHICH FIFA FOR THE TWENTY-FIRST CENTURY?“ 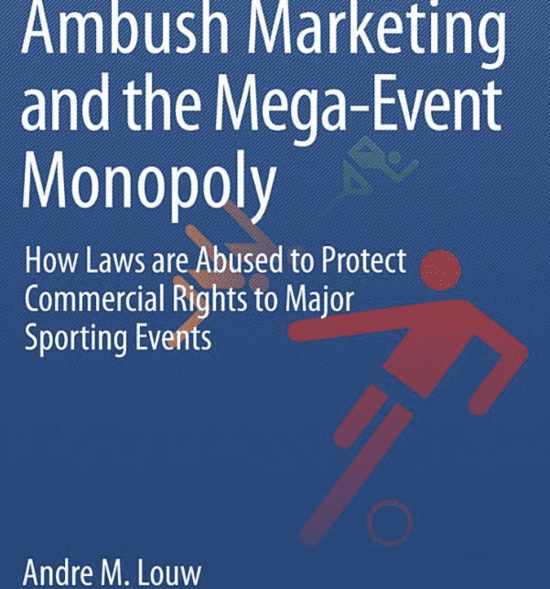