by Kristina Sperkova Posted on May 24, 2014 in
Alcohol Industry, Policy

The Framework is not adopted! A consultation will be launched. That means it can get better or worse. Now it is up to us to gear up our advocacy towards the governments in order to improve the Framework of engagement with non-State actors, protect the role of civil society…

Directly from Geneva and the 67th World Health Assembly I have an update for you, that has important implications for global health and development: it’s related to this document… 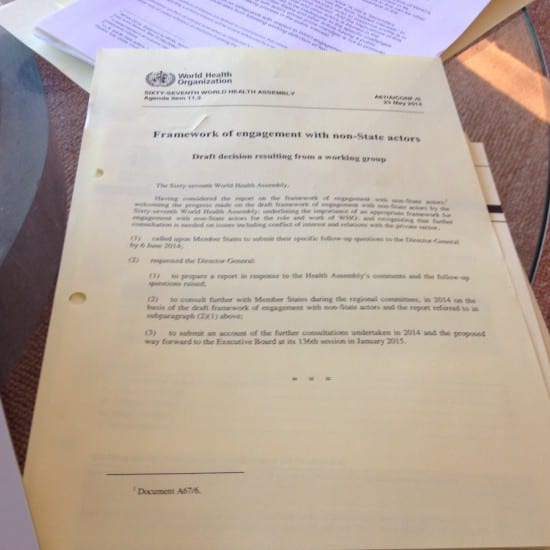 Let’s start from the beginning:

Immediately after arrival to Geneva, our IOGT International team attended in a Side Event “Launch of Chatham House Reports on Global Health Governance and Financing: WHO Reform and Sustainable Health Financing“, where the details, pros and cons and all the challenges with the WHO Reform were discussed. Among others, the involvement of philanthropic foundations was debated. The Bill and Melinda Gates foundation is one of the biggest donors of WHO. On one hand, I think it is positive that the foundation wants to contribute to WHO’s work and promote people’s health.

On the other hand, however, I am concerned about democracy and accountability. Two people – Melinda and Bill –  have disproportionate influence on the global health agenda and what the global community considers priorities. And they have almost as strong a voice in influencing the priorities of WHO as the WHO Member states that represent their people.

When talking about Philanthropic foundations the unspoken assumption is that they pursue people’s best interest, an idea of social good they have. However, more and more frequently they do so in an increasingly undemocratic way. I agree with Ilona Kickbusch and William Easterley who speak of a “cartel of good intensions”.

But the biggest concern has to be devoted to the private sector and its role in global health. Current mechanisms in the WHO governance allow private sector entities to intervene in WHO’s direction disproportionally to the Member States. Dr Margaret Chan, the Director General of WHO, has expressed her stance in various occasions saying that the industry should be left out of negotiations and policy making within WHO. 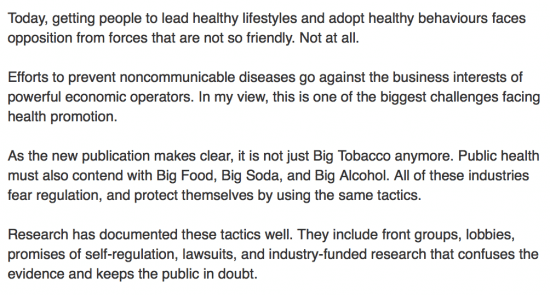 But the proposed Framework of engagement with non-State actors describes the official relationship all the four categories of non-state actors could enter into.

Until now, the private sector could only attend WHO governing body meetings in order to lobby Member States delegations disclosed as NGOs. However, according to the proposed Framework, the private sector would be able to openly enter into official relation with WHO.

This would mean that the alcohol industry, for example, had to agree on working for people’s health advancement (which is a condition for entering into official relation with WHO) while in reality Big Alcohol constantly counteracts the most effective (both related to outcomes and to costs) political measures.

It means that allowing Official Relations status, with all its related privileges, for the private sector like the alcohol industry carries with it an unresolvable conflict of interest. 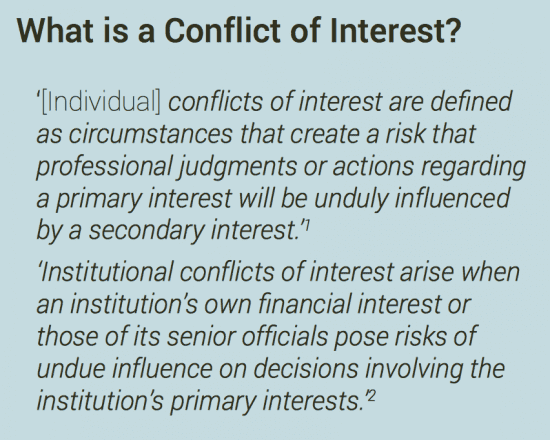 As IOGT International we’ve been advocating for a removal of these parts of the proposed Framework because otherwise the alcohol industry would get legitimisation for participation in WHO’s policy processes and meetings – which is what Margaret Chan is opposing. In addition to turning WHO governing bodies meetings into multi-stakeholder, public-private gatherings, the proposals would also allow the alcohol industry greater engagement at programme level, through agreed 3-year plans with WHO.

I maintain that in the WHO reform process, measures to safeguard WHO’s integrity, authority, brand and leadership role to advance global health must prevail over any wish to draw the private sector closer to global health policy making. There are certainly sectors beyond the tobacco and arms industries (ref discussion paper A67-6) in which profit making for the corporations is detrimental to public health. In our work we’ve pointed, together with GAPA, to the track record of the alcohol industry, that uses the same or similar tactics like Big Tobacco.

Many countries are facing the troubles of big industries, like Big Tobacco and Big Alcohol, putting profit over Human Rights and exerting tremendous pressure on governments’ intentions to proceed with policies that promote health and well-being. 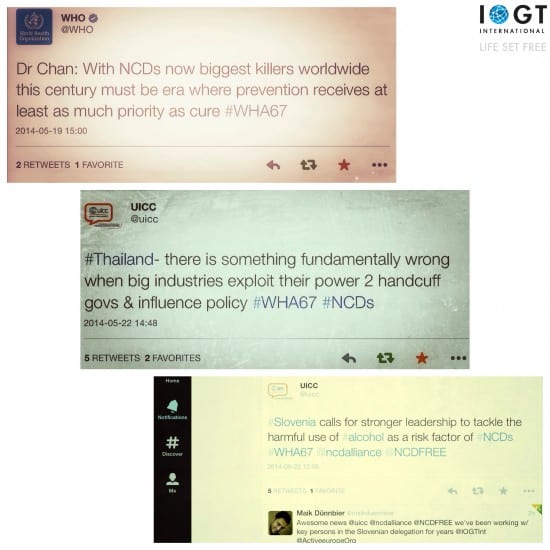 Alcohol, like the tobacco industry, should not be allowed to governing body meetings of WHO, having collaboration with WHO and use the status of the official relation as their brand enhancer.

It is the Member States and those who act for public health enhancement who should set the agenda and act for leadership on global health matters, shaping the health research agenda, setting norms and standards, articulating evidence-based policy options, providing technical support to countries and monitoring and assessing health trends.

And what is the good news? The Framework is not adopted! 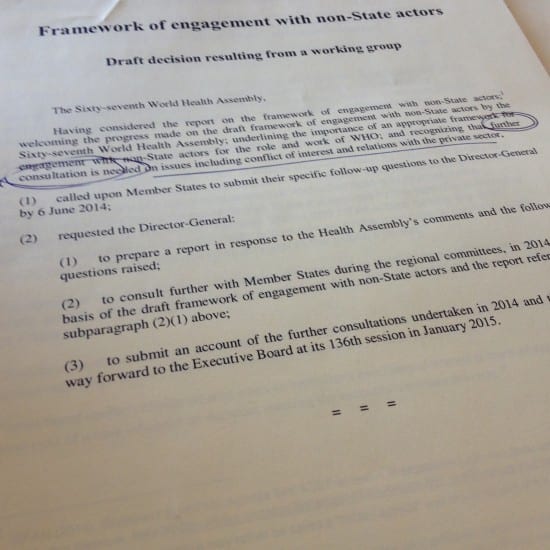 From our work here, we know that especially Brazil and Ecuador, along with other Latin American countries did crucial work in safeguarding WHO from conflict of interest, while the USA, UK and Norway wanted to go the opposite way by granting the private sector upgraded relationship status with WHO.

More analysis and work is demanded from the Member States for a new decision. A consultation will be launched. That means it can get better or worse. Now it is up to us to gear up our advocacy towards the governments in order to improve the Framework of engagement with non-State actors, protect the role of civil society, keep conflict of interest outside of public health policy making and create a sustainable framework for future engagement with a reformed WHO.

Report by WHO Secretariat Framework of engagement with non-State actors

The End of Public Health As We Know It: Constructing global Health in the 21st Century, by Professor Ilona Kickbusch