Exposing ties between Big Alcohol, Big Tobacco – Altria, previously Philip Morris, owns major stakes in SABMiller. Together they manufacture death, disease. SABMiller is among the four largest brewers in the world and Altria Group, Inc. owns 26.7% of SABMiller shares, the biggest part of the shares with vast economic and voting interest in one of the world’s biggest alcohol companies. Altria has three seats on the 11-person board of directors…

The 2005 movie “Thank You For Smoking” – based on the 1994 satirical novel of the same name by Christopher Buckley – depicts Big Tobacco tactics in a sharp and revealing way: the fabrication of “evidence”, the aggressive lobbying, the spinning of news, evidence and stories of the harm of tobacco, the marketing strategies and the collaboration with the firearms and alcohol industries. In fact, the group of three lobbyists call themselves “MOD Squad”: merchants of death.

In our booklet “Profit Over Human Rights – Big Alcohol Out Of Context In Public Health Policy Making” we provide a comprehensive overview of the tactics employed by Big Alcohol – many of which are identical or similar to Big Tobacco’s. The alcohol industry, like the tobacco industry, targets children and young people, and women and girls especially aggressively with marketing. They, too, put profit over independent science, have a track record of promoting self-regulation and at the same time systematically violating their own codes of conduct, oppose evidence-based and high-impact public health measures and instead propose policies that are more expensive and less effective.

Big Alcohol and Big Tobacco really are big buddies – to the detriment of public health, social development and prosperity around the world. 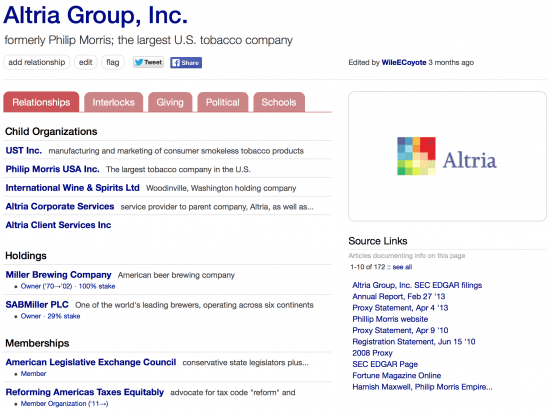 In 2003 as a result of “rebranding”, Altria emerged from Philip Morris Companies. Philip Morris’s decision to alter its name came after decade long pressure from law-makers and public health activists and evidence piling up of the deadly consequences of tobacco smoking. For example, US tobacco companies eventually agreed to pay 46 Federal States the sum of $207 billion in compensation for public expenditures on tobacco-related illnesses and deaths.

So, the branding consultants, the Wirthlin Group, said: “The name change alternative offers the possibility of masking the negatives associated with the tobacco business,” thus enabling the company to improve its image and raise its profile without sacrificing tobacco profits.

That’s who the biggest owner of the SABMiller is. 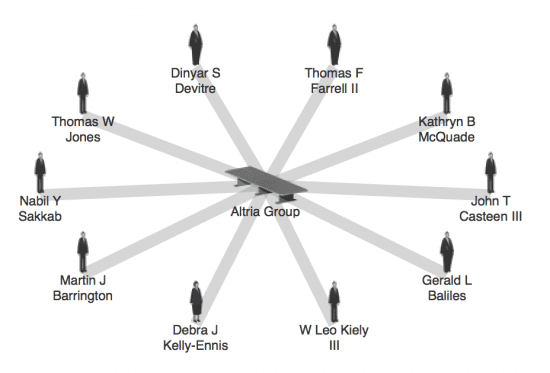 Diagram of board of directors of Altria Group Inc.

Just check the relations of Howard A. Willard – member of the Board of Directors of SABMiller, as the Chief Financial Officer of Altria Group Inc. – entertains close ties to SABMiller executives.

So, entangled with the largest US tobacco company are the world’s second largest brewer (SABMiller) and the world’s largest liquor producer (Diageo). It’s clear that Big Alcohol and Big Tobacco work hand in hand on the highest level. And obviously the alcohol industry has a lot to learn from Big Tobacco tactics – in how to put profits over human rights and keep getting away with it.