by Maik Dünnbier Posted on July 18, 2014 in
Alcohol Industry, Prevention

Football at its best is alcohol free; Alcohol does not belong into football; Fifa cooperation with Big Alcohol is harmful to its constituency…

Welcome to my summary of the World Cup!

1) Football at its best is alcohol free

Football, like other major sports, is flooded with alcohol marketing. An obvious move by Big Alcohol to target children and young people and associate their products with performance, glamour, success and positive emotions. So, it is not so easy to step outside this intoxicating culture and to realise that many of the best athletes choose to enjoy life alcohol free. They do so for different reasons: some had to grow up as children of alcoholics; others skip alcohol to maximise the potential of their physical strengths; and others live free from alcohol because of religious and spiritual reasons.

Well known is that Cristiano Ronaldo, the best football player in the world, chooses to live alcohol free. His dad was an alcoholic but Cristiano also is aware of alcohol’s negative impact on his performance and abilities on the pitch. That’s why he recommends all children and youth to “avoid alcohol”.

The best player of Brazil and one of the transcending stars of the 2014 World Cup is Neymar. He, too, chooses to live free from alcohol; free to be as creative and energetic as possible on the pitch. That’s where his passion and focus lie.

The best scorer in World Cup history is the German Miroslav Klose. At this advanced stage of his career – he is 36 years of age – he is trying everything he can to take care of his body. Living free from alcohol is part of that regime because alcohol inhibits the body’s ability to recover effectively and quickly after physical strain. 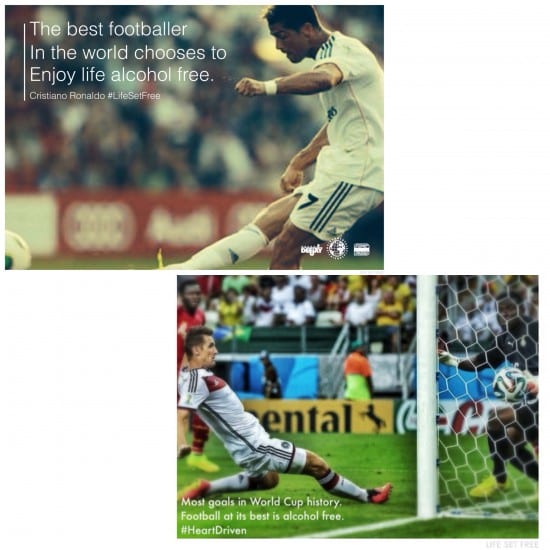 The captain of the Netherlands and one of the biggest stars in global football, Robin Van Persie, also chooses to enjoy life alcohol free. In a beautiful The Guardian article about Van Persie, Leo Verheul writes: “Sometimes people ask me: ‘The son of that friend of yours, Robin van Persie … what’s he like?’ I answer: ‘Healthy. Healthy in all kind of ways.’ Robin thinks healthily and lives healthily. He watches what he eats, takes the rest a player needs, doesn’t smoke and never drinks alcohol. He has three activities. In order of importance, they are: his wife and children, football and table-tennis.” 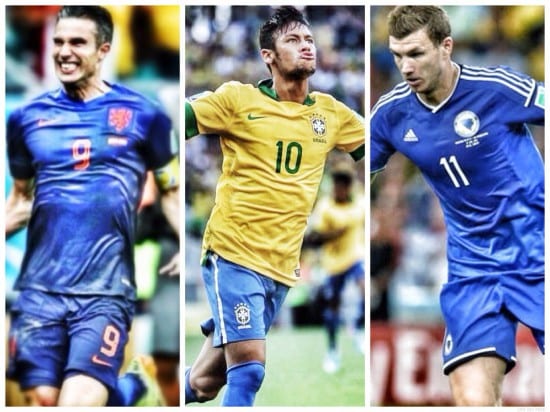 So, some of the biggest stars of the teams that reached the semi-finals at this World Cup are alcohol free. The World Champion Germany has more players that boost their performance on the pitch and the freedom in their lives by choosing not to consume alcohol. Mesut Özil is one example. Jerome Boateng is another one. And Lukas Podolski, the Best Young Player at the 2006 World Cup, is a third example. 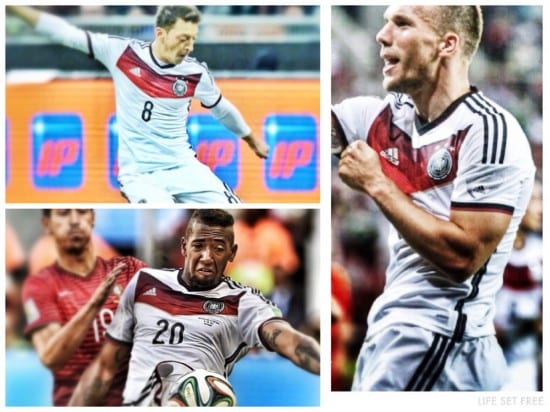 And then there are more role models in other teams. Consider Edin Dzeko the best player of the Bosnian national team. Or consider the Toure brothers Kolo and Yaya of Ivory Coast. 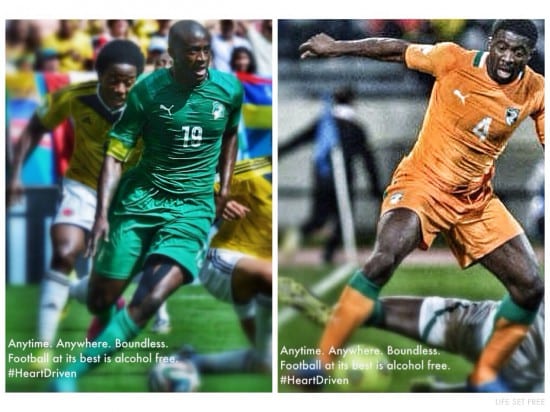 2) Alcohol does not belong into football

On beforehand of the World Cup in Brazil this summer, Fifa has been doing the dirty work for AnheuserBusch-InBev (AB-InBev), the world’s largest beer producer owning the Budweiser brand. Budweiser is one of the main sponsors of the Fifa World Cup. And Fifa and their main sponsors, including the alcohol industry, are not only exempt from any taxes. Fifa and AB-InBev also bullied the Brazilian government into changing a law from 2003 that was put in place to deal with alcohol-related football violence.

How ridiculous and downright cynical this move was is exemplified by a simple Google-search for “fifa has an alcohol problem”. 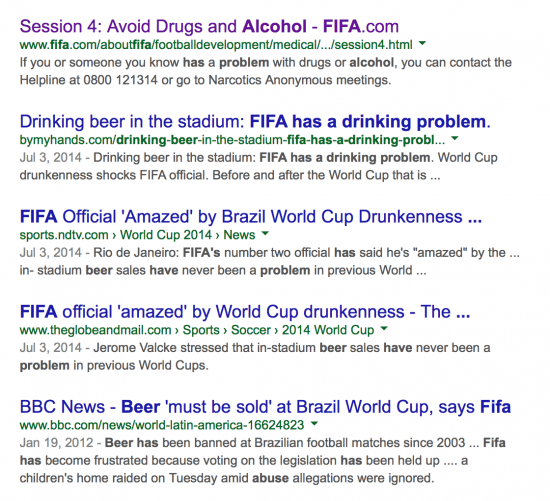 Fifa has an alcohol problem

The top and bottom search hits show contradictory messages, don’t they? On the one hand Fifa claims alcohol “must be sold” and that alcohol and football were inseparable. On the other hand Fifa produces health promotion videos with one of its brightest stars saying “avoid alcohol” to children and youth.

So, this summer Fifa made headlines with the surprising and astonishing admission that alcohol use during the World Cup had gotten out of hand and caused “unexpected” problems like violence, or alcohol fuelled sexism and objectification of women. As the Budweiser Bill backfired badly, reality has caught up with Fifa, clearly showing that alcohol does not belong into stadiums and that football at its best is alcohol free.

3) Fifa cooperation with Big Alcohol is harmful to its constituency

It’s well proven by now that alcohol marketing makes children start using alcohol and makes those that already use, consume more. Long-term studies confirm a strong association between alcohol marketing – including advertising, sponsorship and merchandising – and the alcohol intake intentions and behaviour of young people. These studies show that 12-year-olds highly exposed to overall alcohol advertising are 50% more likely to start using alcohol than those lightly exposed. And among 10- to 14-year-olds, alcohol-branded merchandise becomes a causal factor in the initiation of binge alcohol use.

Similar results came out of Australia previously, published in the Journal Alcohol and Alcoholism: Nearly a third of athletes (ca. 31%) reported receiving some form of sponsorship with 95% of those sponsored receiving alcohol industry sponsorship; 60% of the athletes were meeting criteria for hazardous alcohol use while 6% reported abstaining from alcohol.

… and continues to ignore its own message, when it comes to profits – despite the unmistakable evidence that its own athletes are being exposed to risks.

I think the lesson to learn from this year’s World Cup is then: Governments should consider alternatives to alcohol industry sponsorship of sport. Hypothecated taxes on tobacco have been used successfully for replacing tobacco sponsorship of sport in some countries, and may show equal utility for the alcohol industry’s funding of sport. Alcohol advertising should be banned because life, like football, is at its best alcohol free.

Time To Cut The Ties Between Alcohol And Sports, by Rob Donovan in The Conversation

Fifa’s Game Is Not My Game – Anymore