by Rogers Kasirye Posted on July 23, 2014 in
Alcohol Industry, Policy

Reasons for Uganda’s high alcohol consumption, its consequences and ways to solve the problems…

“Uganda leads its African neighbours for alcohol intake, largely thanks to a rampant trade in illegally made rotgut and a winning formula of booze made from bananas,” the broadcaster noted in an article published online recently. The article refers to findings presented by the World health Organization (WHO) in its Global Status Report on Alcohol. In Uganda’s case, the study says patrons generously consume “waragi, also known as war gin (local alcohol spirits) because it was once used to fortify troops. Though [using] too much inevitably leads to surrender.”

Basing on the above brief background the following are the identified key considerations as to why Uganda’s Alcohol consumption levels are on an increase;

Why is Uganda worse than other EAC Countries?

Uganda’s worsening situation is likely to be maintained for a while mainly due to increased informal production of local alcohol by everyone and everywhere. This is coupled with weak controls in law enforcement of

For instance in Uganda bars and shops have open sales almost 24 hours. This makes it easy to access alcohol which is believed to be largely produced as informally, unregistered alcohol in homes and villages. The unrestricted corporate messages via the media on radio and TV which glamorize alcohol and normalise and which aim at targeting children, is also another leading cause for my country’s high alcohol intake.

It is also evident that the weak alcohol policy in Uganda as well as limited awareness and sensitisation for alcohol harm in its different forms, plus the high unemployment rates especially among the youth and related (often severe) consequences are leading to increased alcohol intake in Uganda.

Furthermore, there are other social, environmental and human factors including high levels of poverty and cultural factors which also appears to be fuelling alcohol consumption. 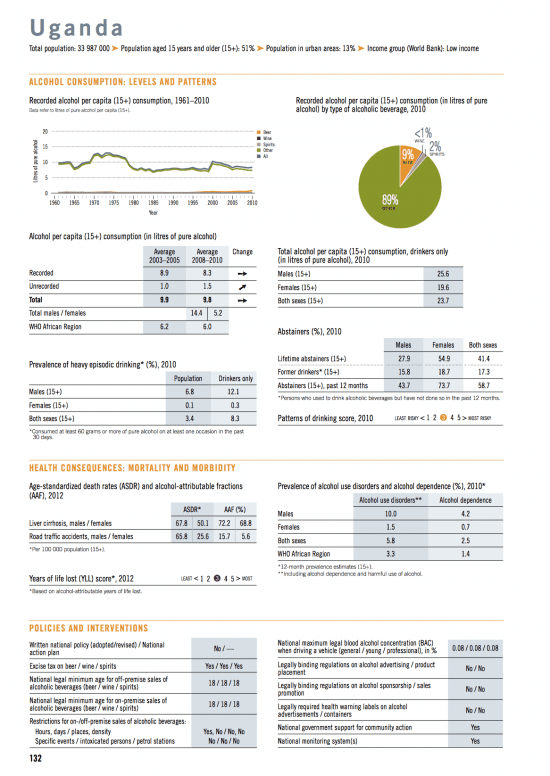 What should be done to reduce and prevent informal alcohol?

Alcohol policies have been found weak and outdated, enacted by British colonial masters in 1964.  Thus there is a need for review and strengthening of controls from village levels up to the national level and in this case local leaders should participate in its prevention.

In order to reduce the overall consumption of alcohol in Uganda there is a need to put forward strict laws and policies concerning alcohol consumption, coupled with awareness-raising programs both in schools and communities. There is also need to ban small packages which encourage easy availability and access of alcohol among children and youth thus escalating underage alcohol use.

Controls and law enforcement will also need to be expanded in media outlets both electronic, billboards, television and radio which pass on adverts the whole day and many of the adverts glamourizing alcohol. In light of this reality I think a ban of alcohol advertising is overdue.

WHO Global Status Report on Alcohol and Health 2014, pdf