We can no longer afford to have a multi-billion dollar industry for a product that is ranked as third leading risk factor for death and is responsible for 5.5% of the Global Burden of Disease, controlling the public relations agenda. Metamorphasis is controlled by DNA, and the current transition indicates that ICAP’s development is being directed by its alcohol and tobacco industry genes…

One day,
Gregor Samsa, a traveling salesman, wakes up to find himself transformed into a giant insect. His life deteriorates tragically from then on.  Like the unfortunate itinerant huckster in Franz Kafka’s novella, Metamorphosis, the International Center for Alcohol Policies (ICAP) seems to have awakened to find itself transformed into an alcohol industry lobby group. Any pretense of ICAP’s Fox-news-like mantra of “analysis, balance and partnership” has seemingly been abandoned with their April 9, 2014 press release announcing a merger with the Global Alcohol Producers Group (GAPG), a major industry lobby organization.

As its name denotes, the GAPG represents the world’s 13 leading beer, wine and spirit producers including Beam, Bacardi, Pernod Ricard, AB InBev, and Diageo.  GAPG established itself in 2005 “to support a constructive policy dialogue with the World Health Organization, member state governments and the public health community to reduce harmful drinking.”  (Associated Press, 2008).  Their launch coincides with the time that the WHO began developing the Global Strategy to Reduce the Harmful Use of Alcohol (WHO, 2010), which advises UN/WHO member states on ways to reduce alcohol-related harm, like increasing taxes and regulating availability.  Since its inception, the organization has spent more than $1 million on lobbying the US government alone, taking positions that seem to be diametrically opposed to those recommended by the public health community.

ICAP’s own history seems to be worthy of a merger with the alcohol industry. ICAP is registered as a non-profit, but it is funded by 15 of the world’s leading alcohol producers, most of which are the same companies that comprise the GAPG.  It was founded in 1995 by a consortium of alcohol companies, including MillerCoors, which at that time was part of tobacco giant Phillip Morris.  According to an article on the early history of ICAP (Jernigan, 2012), Miller’s primary interests in the creation of ICAP were purely commercial, i.e., to aid their planned international expansion by managing worldwide issues and thereby assisting their sales and marketing group in an increasingly competitive marketplace.

Contrary to ICAP’s original mission “to promote understanding of the role of alcohol in society and help reduce the abuse of alcohol worldwide,” there is strong evidence that ICAP has progressed primarily into a an industry public relations organization dedicated to the advancement of industry-favorable alcohol policies (Jernigan, 2012; McCreanor, 2000; Babor and Robaina, 2013; Bakke and Endal, 2010; Anderson and Rutherford, 2002).

On the surface, ICAP continues to present the image of a dispassionate source of scientific information and problem-solving partnerships.  In 2013, ICAP and GAPG released the Beer, Wine and Spirits Producers’ Commitments to Reduce Harmful Drinking. The Commitments constituted a pledge to reduce underage alcohol use worldwide, strengthen self-regulatory marketing codes, prevent driving under the influence of alcohol, act responsibly in the area of product innovation and encourage retailers to reduce harmful alcohol use.

In response, an international coalition of researchers and health NGOs drafted the Statement of Concern (Babor et al., 2013), describing the lack of evidence behind the Commitments and highlighting the detrimental role that the alcohol industry is playing in the alcohol policy landscape and in public health activities, particularly in low- and middle-income countries.  The Statement was received favorably by WHO and in an open letter published in the British Medical Journal, WHO Director General Dr. Margret Chan said that “In the view of WHO, the alcohol industry has no role in the formulation of alcohol policies, which must be protected from distortion by commercial or vested interests.” (Chan, 2013).

Dr. Chan’s letter clearly “raised concerns among industry representatives”, as reported in an industry trade journal about the reaction to the Commitments and general role in the formation of alcohol policies, saying that it’s “simply unconscionable” for companies as powerful as theirs not seek to  involve themselves in policy development (Cooper, 2013).  Exactly a year following Chan’s letter, a joint press release by ICAP and GAPG (2014) states that the purpose of the merger is to ‘support’ and ‘accelerate’ the implementation of these Commitments and “promote understanding of the positive role of alcohol in society and the most effective policies and programs to combat harmful use, as well as contribute to an informed debate by providing balanced and evidenced-based science.”

It goes on to say, “By leveraging ICAP and GAPG’s significant combined experience from global efforts and continued research, the new organization will work to inform scientific and policy conversations with effective approaches to reduce harmful drinking. Going forward, it will actively communicate the views and perspectives of producers, and advocate for effective policies and approaches.”  This seems to directly oppose the statement made by the Director General of WHO.

This is not the first time we’ve witnessed such a scary transformation.

In 2012, SpiritsEUROPE was formed by the merger of Confederation of European Spirits Producers (CEPS) and the European Forum for Responsible Drinking (EFRD).  EFRD may be better recognized by its previous name—The Amsterdam Group (TAG).  Its members include many of the same producers who make up the GAPG, including Beam, Diageo, Brown-Foreman and Pernod-Ricard.  Director General of spiritsEUROPE, Paul Skehan, stated that one of the “virtues of the merger is bringing together the complementary strengths of large alcohol producers and national industry associations which formed the membership of CEPS.”  Skehan has also stated that as a result of the merger, “cooperation between the different drinks trade bodies in Europe on alcohol harm has been stepped up.” (Cooper, 2013).

While in Kafka’s novel the reason for the main character turning into an “ungeheures Ungeziefer” (monstrous vermin) is never revealed, ICAP’s metamorphosis seems to be a strategic maneuver to extend the Global Producers’ already sizeable power.  This is concerning to the public health community, considering the past and current actions of the producers, trade associations, social aspects/ public relations organizations (SAPROs) and industry think-tanks.  In 2011, GAPG member Diageo, considered to be the world’s largest spirits company, reached a foreign bribery settlement with the US Securities and Exchange Commission to pay $16m to resolve allegations that it bribed government officials for over six years in India, Thailand and South Korea to boost sales and receive favorable tax treatment (US Securities and Exchange Commission, 2011). 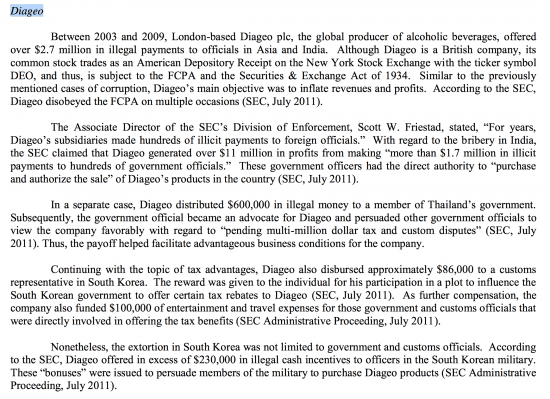 Another member of GAPG, AB InBev, producers of Budweiser and many other brands, were implicated in the decision by FIFA to pressure the Brazilian government to allow alcohol sales at the World Cup football stadiums.  Predictable increases in violence and mayhem have been reported during the games.  Pressure from FIFA and AB InBev on Russia, host of the 2018 World Cup, has resulted in the passing of a bill which will suspend the alcohol advertising ban put in place in 2012 as part of a campaign to curb alcohol abuse and alcoholism (Baber, 2014).

Another makeover witnessed this year is that of the Century Council, a well-known industry body in the USA which changed its name to the Foundation for Advancing Alcohol Responsibility (FAAR)—“our bold new plan and our new name will make our connections with parents, teachers, elected officials and community leaders stronger”, said one of the organization’s Board member’s (PRWire, 2014).  The Council, or Foundation, is funded by many of same producers in GAPG, ICAP, and spiritsEUROPE (i.e. Diageo, Beam, Inc., Brown-Foreman, Constellation Brands, Inc., and Pernod Ricard).

With non-profit classifications, deliberately confusing do-gooder names such as the International Center for Alcohol Policies and the Foundation for Advancing Alcohol Responsibility, and frequent name changes, it can be challenging to distinguish organizations with true public health motives from those with vested interests.  Through their SAPROs and industry think-tanks, the Producers position themselves ingeniously and can confuse media outlets, policy makers, alcohol scientists and the public, which often assume the information is coming from an independent reliable source.

Although the eventual impact of the ICAP/GAPC metamorphosis remain to be seen, the following points seem clear:

At this time the international public health community and other public interest groups need to take a more active role in monitoring and evaluating industry actions in the areas of prevention, treatment and policy.  We can no longer afford to have a multi-billion dollar industry controlling the public relations agenda for a product that is ranked as third leading risk factor for death and is responsible for 5.5% of the Global Burden of Disease (Lim et al., 2012).  Metamorphasis is controlled by DNA, and the current transition indicates that ICAP’s development is being directed by its alcohol and tobacco industry genes.

Anderson, P and Rutherford, D.  (2002). The International Center for Alcohol Policies: a public health body or marketing arm of the beverage alcohol industry?  The Globe, 1.

Get to know Thomas

Other recent posts by Thomas Babor

2 comments on “ICAP’s Metamorphosis: From Analysis, Balance, And Partnership To Industry Lobby Group?”