United We Stand With West Africa

by Sven-Olov Carlsson Posted on August 24, 2014 in
Sustainable Development

We are deeply saddened by information reaching us that IOGT members and friends have fallen victim to the Ebola virus and have passed away. We can hardly comprehend the suffering going on in West Africa right now. And we mourn the loss of your relatives, who were also our friends and IOGT family members…

The world is witnessing the worst outbreak of Ebola – the world’s deadliest virus –  in history. Its death toll keeps rising. The Ebola outbreak in West Africa has been declared an international public health emergency by the World Health Organisation. More than 1,427 children and adults have so far been killed by Ebola in Guinea, Liberia, Sierra Leone and Nigeria. Seven other countries are on high alert. The number of people infected with the deadly virus has been put at 2,615 by the World Health Organisation. The disease was identified in Guinea in March and spread to Sierra Leone, Liberia and Nigeria  subsequently.

As the health workers and aid organisations try to battle misinformation and mistrust in their efforts to contain the disease, the world stands by West Africans with deep compassion. We in IOGT International certainly do.

The information from our members in IOGT Liberia, IOGT Sierra Leone and  Ghana about the situation in their country is alarming and touches our hearts. The IOGT International board discussed how to best support the response to the outbreak, how to stand by our members, their families and friends in these trying times. And our position was that our members should contribute to the disease prevention and control as much as they could and in the most appropriate way – for example via the Red Cross, Doctors Without Boarders, Plan International and of course the World Health Organisation.

And in mid-July we learned per Doctors Without Borders warning that the illness is “out of control” in Guinea, Liberia and Sierra Leone. Four other West African countries have been – Ivory Coast, Senegal, Mali and Guinea Bissau – to prepare for the possible arrival of travellers carrying the virus. IOGT International has members in all of the affected countries.

Guinea, for instance, has been hit the hardest by the virus, which first appeared there in February, before spreading through the tropical forests and reaching densely-populated capitals in the region.

We are deeply saddened by information reaching us that IOGT members and friends have fallen victim to the Ebola virus and have passed away. We can hardly comprehend the suffering going on in West Africa right now. And we mourn the loss of your relatives, who were also our friends and IOGT family members.

We must stand united in trying times. That’s what IOGT is all about. And so, to all IOGT members and friends and all the others trying to survive, trying to cope, trying to help and trying to support their communities, we applaud your heart-driven efforts. 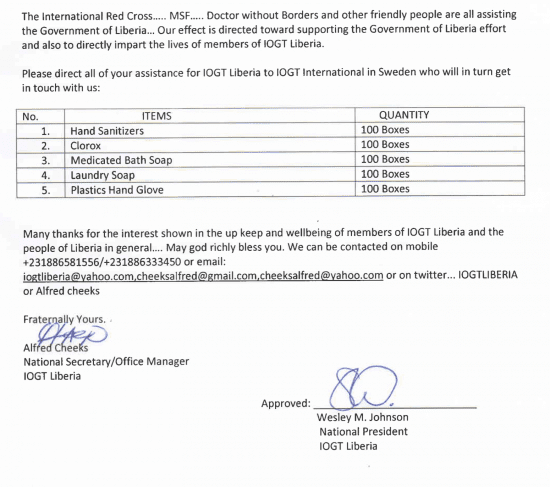 IOGT Liberia for example has been running awareness-raising activities to inform about preventative measures, to end the misinformation and stigmatisation. IOGT Liberia has had announcements on local radio programs, distributed information flyers in communities and dealt out sanitation equipment. They, like other IOGT members keep working, against all odds.

In this spirit, we encourage everyone to consider donations to the established aid organisations – for example via the Red Cross, Doctors Without Boarders, Plan International and of course the United Nations agencies.

Remain updated about the virus, via WHO Africa

The Guardian article: “Fear and Ignorance as Ebola ‘our of control’ in Parts of West Africa”

Akpeteshie – A Vicious Cycle Of Death