The epidemic of NCDs clearly shows: our way of life is ruining our quality of life. We live in a fundamental contradiction of consuming us to ill-health, despair and even death. The story of NCDs is thus a story of vast inequalities and injustices. This story tells of a Western culture where norms we have constructed and the consumerism we indulge in is literally making us sick…

So, here I am, poised to finally write the blog I’ve had on my mind for a couple of months. In March I had the opportunity to travel through the east cost of the USA, and meet several inspiring people and organisations. I also bought a new book: “Lethal But Legal“.

It’s a very interesting, thought-provoking book. Most of all, it’s a book that manages like few others to describe the times we live in today.

We live in times of an epidemic entirely made by human beings. We live in a world of so-called lifestyle diseases. But make no mistake, it’s not the lifestyle choice of individuals – as neo-liberalism and neo-corporatism might have you believe – that causes them diseases. It’s the environment, the culture, the society that we have built in the Western world that manufactures, promotes, glamorises  and fuels behaviours that are detrimental to human well-being, societal development and the enjoyment of basic Human and Civic Rights.

We live in the age of NCDs. The age of profound injustice and inequality.

We know today that NCDs are a clear threat not only to human health, but also to development and socio-economic prosperity. 63% of deaths worldwide are caused by an NCD. NCDs are the world’s main killer. 80% of these deaths now occur in low- and middle-income countries. NCDs are not diseases of affluence but of poverty. Evidence shows that across the industrialised world diseases such as diabetes and heart disease are associated with poverty and socio-economic deprivation.
Half of those who die of chronic non-communicable diseases are in the prime of their productive years, and thus, the disability imposed and the lives lost are also endangering the very sustainability of our societies. NCDs are projected to burden the world with a cost of $47 trillion by 2030.

These few sentences outline paramount issues of injustice and inequality.

And there’s even more to it than this. The five NCDs are all linked by four common risk factors: exposure to tobacco, alcohol, physical inactivity and poor diet. All four of these major risk factors are manufactured and driven by powerful, global industries.

Those industries come primarily from high-income countries. The products they manufacture and the behaviours they promote burden people in low- and middle-income countries disproportionately. NCDs are linked with and are a reinforcing catalyst of poverty.

Here lies for me the significance and urgency of the global burden of NCDs. NCDs tell us in Europe and North America that our world and the lifestyle choices our culture dictates are not healthy, are not sustainable, are not fair, and are not free.

Western lifestyle: neither healthy, nor sustainable, and not at all fair

They are not healthy because the way of living in the environments we’ve created actually makes us sick. For instance, we live in an age of an intoxicating alcohol culture that glamorises the socially most harmful drug and that worships the myths produced by the alcohol industry. Every ten seconds someone in the world dies because of alcohol.

They are not sustainable firstly because of the costs that NCDs burden the healthcare system and welfare state with, and secondly because the cause loss of productivity of well-educated, working-age citizens. In the next two decades, NCDs will cause costs of more than $30 trillion. That equals 48% of the GDP in 2010.

They are not fair because the NCDs epidemic is originating from prosperous societies but today disproportionately affecting people in deprived and poor settings. NCDs are pushing millions of people into poverty, perpetuating the vicious circle of inequality, powerlessness, exploitation, under-development and ill-health. Corporations exploit “emerging markets” in these countries ruthlessly, taking home the profits and leaving behind bankrupt welfare states, broken communities and horrendous costs.

They are not free. Yes, the lifestyle choices our (Western) consumer culture prescribes are not free because powerful and wealthy multinational corporations manufacture and market products that promote addiction, over-consumption and ill-health.

They make healthy alternatives less or not available, aggressively lobby against regulations that restrict availability, affordability and marketing of such products and they ruthlessly market these products to the youngest and most vulnerable in our societies. The book “Lethal But Legal” provides concrete examples for each of these points from six industries that are merchants of disease and death: the tobacco, alcohol, food and drink, automobile, firearms and pharma industries. 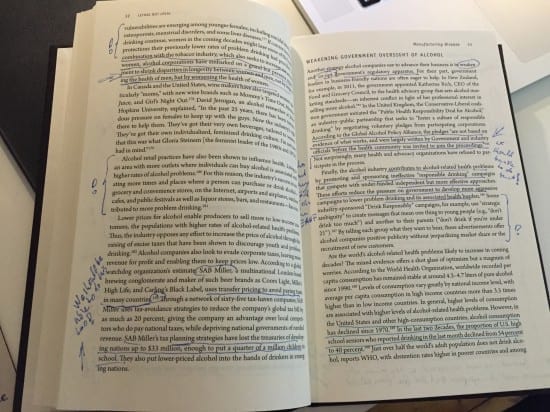 Notes and thoughts while reading Lethal But Legal

The epidemic of NCDs clearly shows us today that our way of life is ruining our quality of life. We live in a fundamental contradiction of consuming us to ill-health, despair and even death. Mental health conditions alone will account for the loss of an additional US$ 16.1 trillion over this time span, with dramatic impact on productivity and quality of life.

The story of NCDs is thus a story of vast inequalities and injustices. This story tells of a Western culture where the norms we have constructed and the consumerism we indulge in is literally making us sick. The story of NCDs narrates the dystopia that in today’s consumerism fuelled by corporate greed, we have lost sight of essential wisdom that humans have held for centuries: ubuntu and wetiko.

Ubuntu can be understood as the universal bond of sharing that connects all humanity – it appears in different words in many cultures and spiritual traditions around the world. Wetiko can be understood as a sickness of the soul and spirit, one who eats the life of another human and the very root of humanity’s inhumanity to itself.

And so my hope is that in summoning all efforts possible to turn the tide against NCDs, to resolve to prevent NCDs, we will rediscover some of that ancient wisdom about humanity; that we will re-emerge out of consumerism and the corporate consumption complex – like the phoenix out of her ashes – into active citizenship and be citizens again; that we stop roaming shopping malls and start populating the public realm to reclaim and rebuild our communities.