New evidence presented at the annual meeting of the American Public Health Association in New Orleans* suggests that alcohol tax increases not only reduce the harms resulting from alcohol consumption in a population, but they may lead to a small net increase in the number of jobs. New research of scientists with the University of Illinois at Chicago and the Center on Alcohol Marketing and Youth (CAMY) at the Johns Hopkins Bloomberg School of Public Health, shows that even modest increases in alcohol tax can lead to a net gain in employment. 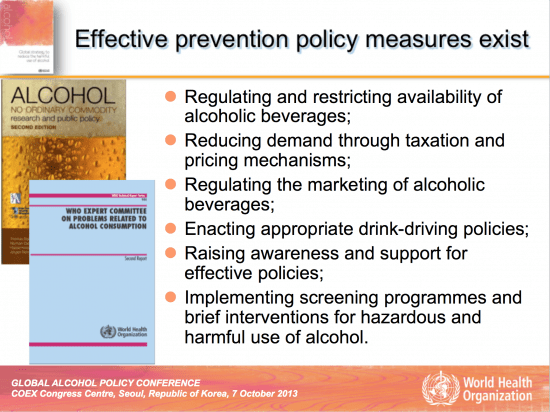 We have known for a long time that taxes on alcohol are one of the most high-impact and cost-effective tools to improve public health. Higher taxes lead to higher prices which decreases levels of consumption.

This slide from a WHO presentation at the Global Alcohol Policy Conference in Seoul, South Korea, 2013, summarizes what independent scientists have established by now. Effective prevention policy measures do exist and among them is taxation.

In fact, alcohol taxation is considered one of the “Three Best Buys” according to esteemed institutions like the World Bank, WHO, World Economic Forum and Harvard School of Public Health.

The “NCD ROADMAP REPORT” of July 2014 for Economic and Health Ministers in the Pacific Region provides another interesting diagram. It shows that raising taxes on alcohol is very cost-effective and that the implementation costs are very low.Additionally there is high feasibility for intersectoral action. When alcohol taxation measures are being used – especially when they are integrated with measures of the other “Best Buys” – the costs that alcohol harm causes a society can be reduced. In the EU, for instance, alcohol causes costs of €156 billion every year. In the USA the costs of alcohol harm amount to $225 billion. 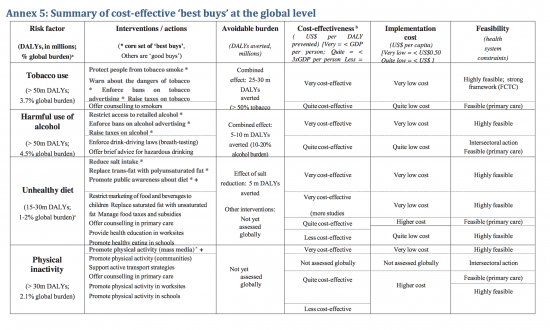 Alcohol taxation is good for public health. This truth is widely accepted among independent scientists, public health experts, civil society and law-makers. It’s a truth that is only challenged by the alcohol industry and their lobby groups. Big Alcohol may claim dramatic job losses from tax increases. Big Alcohol also claims to be harmed by excise taxes and that alcohol was overtaxed. Big Alcohol also invokes the notorious black market and that tourism is undermined to argue against tax increases and it claims that higher taxes unfairly punish the ordinary person.

The important point in this blog is: The new research exposes the Big Alcohol myth that alcohol taxation leads to job losses. It shows that alcohol taxation can in fact lead to more employment opportunities. The mechanism is this: while losses of jobs in the alcohol industry itself will occur, the money that consumers will not spent on alcohol together with the newly raised tax revenues for the government are going to yield more spending in other sectors, on other goods and services. This will lead to more jobs being created in non-alcohol sectors. The losses that the alcohol industry has to face, will be offset by gains in other sectors.

Additionally, those alcohol users who consume excessively pay more of the taxes than those users who consume less often and fewer quantities. This means that the strongest arguments that Big Alcohol has been using to undermine public health-minded alcohol taxation, are debunked by independent evidence.

It is worth noting that in most countries around the world, especially the high-income countries, that employ alcohol taxation policies but have not updated the taxation level, inflation has caused for alcohol taxes to continue to decline in real value over the years. For example in the USA, Federal excise taxes have declined 41% in real value since the last time they were raised in 1991 because they have not been adjusted for inflation. This decline costs the federal government approximately $7 billion each year.

Alcohol taxation can meaningfully be used to tackle the tremendous burden that alcohol harm puts on societies. In New Hampshire, alcohol harm costs the state’s economy more than $1.8 billion in lost productivity, law enforcement, medical expense and slower economic growth. Public health advocates there are asking for more profit from state liquor stores to go toward helping alcoholics in New Hampshire. Higher alcohol taxes that are used to raise financial resources for better prevention and health promotion is thus a cost-effective and impactful way to go.

I also hope that this new research will help support lawmakers and governments to protect existing alcohol legislation in places where evidence-based regulations are in place. In Utah the Governor has come under pressure by the results of a statewide poll released by UtahPolicy.com. The survey among 402 registered voters, showed that two-thirds of Utahns believe the restrictive state liquor laws are a detriment to economic development.

The new research gives advocates for evidence-based alcohol policy measures another strong argument to counter Big Alcohol myths about the negative impact of alcohol regulations on the economy.

With the evidence that is now piling up, I think that advocates for public health, societal development and economic sustainability can feel confident in including alcohol policy measures, such as taxation, into the mix of measures that yield benefit across different sectors. This is what we in IOGT International are convinced about: evidence-based alcohol policy measures are useful (and too often still under-used) tools for making the world a better place.

*Experts note that studies presented at medical meetings are typically considered preliminary until published in a peer-reviewed journal.