My Dress My Choice… Right?

by Brenda Mkwesha Posted on November 26, 2014 in
Uncategorized

Kenyan women rise up to protest violence in public space and demand equal rights. Women are no longer just mothers, cooks and cleaners in the home. They are running major companies; they want to be heard not just seen…

Yesterday we celebrated the International Day for the Elimination of Violence against Women (#IDEVAW), by calling on the Women’s Rights community and political leaders to step up their actions in addressing alcohol – a major factor fuelling fuelling the global epidemic that is gender-based violence.

Yesterday, on that occasion, the 16 days of activism were launched as well – to stop violence against women.

These global occasion of highlighting a fundamental problem fall on fertile ground here in Kenya. The last days headlines in Kenya have been reporting a lot of attacks on women by groups of young men who cite that whatever the woman was wearing “tempted” them. This of course resulted in women marching in protest against the attacks and some of the protesters were in turn attacked. The skewed moral compass of some men in Kenya has led them to attack women of all ages, dressed in ways that these men claim are “too provocative.” Some of the attackers are bragging on social media about teaching women a lesson.

There seems to be a common belief among the attackers that the women are “rightfully” attacked because they were dressed provocatively. Even some women defend the attackers claiming the same thing.
The question no one is asking is: Why now?

I think this has something to do with the 20-year anniversary of the Beijing Declaration, adopted in 1995 at the 4th World Conference on Women, under the theme “Action for equality, development and peace”. If we go back to 1995, few women in Africa were aware of their rights and too many were still living under the shackles of stereotypes such as “a woman’s place is in the home, ‘barefoot and pregnant'”.

Since then, there has been an influx of women in the workplace; today women are successfully running their own businesses and women are increasingly financially and emotionally independent. This reality in many parts of Sub-saharan Africa, especially in urban contexts, has replaced the common conception that a man shows how great and valuable he is by being the provider, the purse holder, the one wearing the pants and paying for everything whilst making the woman beg him and have his children. Women are no longer just mothers, cooks and cleaners in the home. They are running major companies; they want to be heard not just seen. 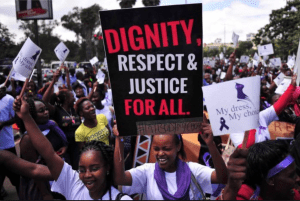 As far as the “role” of men goes, some of them can’t handle that they are not ‘needed’ financially or sometimes emotionally. Those that only had financial stability to offer find that women can take care of their own bills and if they do not reinvent themselves, they find that they are obsolete. There’s a lot of resentment that has been bred over the past 20 years and males seem to suddenly feel incapacitated. They cannot deal with enlightened, independent and empowered women and succumb to hooliganism to cower her.

For us to be successful in stopping violence, men must stop objectifying women so that they see that women are people, too. The mushrooming of ubiquitous alcohol marketing in Kenya and many other counters of Sub-saharan Africa contributes to fuelling the objectification and sexualization of women with their aggressive and de-humanizing imagery and messages.

When I saw the videos of these attacks, I realized that the women were not treated as beings but as objects that can be treated every which way. If the attackers had stopped to think that these women are human like them, some semblance of compassion would have taken hold. Still, however, to many men women are like possessions, unimportant ones at that. Women are objects of desire or humiliation and nothing more.

Attacks like we had to witness in Nairobi have occurred before in Malawi, Uganda, South Africa, Zimbabwe and Nigeria. The emerging tide of empowered and well-educated women is facing intimidation, oppression and violence. It shows that we have made progress but that our struggle is not over. We need stronger efforts. We should band together to make sure that the streets are safe for all human beings.

6000 Minds And Hearts To End The World’s Pandemic

Our Written Statement at CSW59