by Maik Dünnbier Posted on January 2, 2015 in
Alcohol Industry

The alcohol industry fuels the alcoholizaition of Christmas, but there is also a different culture and conception for Christmas out there, one that puts children first…

Christmas time is over. And the holiday season is slowly coming to an end. Yesterday, I enjoyed seeing how different people around the world are ringing in New Year in different ways.

Therefore I felt inspired, a week after Christmas Eve, to take a quick look at how different cultures treat Christmas and what that might mean for the people.

To begin with you must know that Christmas time is special in my family because my mom is born on December 24. It actually means that my family celebrates two events in one day – and this festive and solemn, peaceful and lighthearted atmosphere carries over to the rest of the holiday season.

We are usually (if we are at home in Cottbus, Germany) following the same traditions every year:

Christmas for me means family – even after my brother and me have moved out of our parents’ home and built our own lives. We all come together from different parts of the world to celebrate Christmas – together.

For us it’s about love and caring. It’s about catching up obviously. It’s also about doing sports together and it’s about being witness to one another and being there for another; it’s about honesty and support, shelter and encouragement. It’s for sure about joking, making fun of one another and enjoying a good laugh. That’s our Christmas culture, if you will.

What does family mean to you? And what’s your Christmas culture?

For the alcohol industry, the picture looks very different… 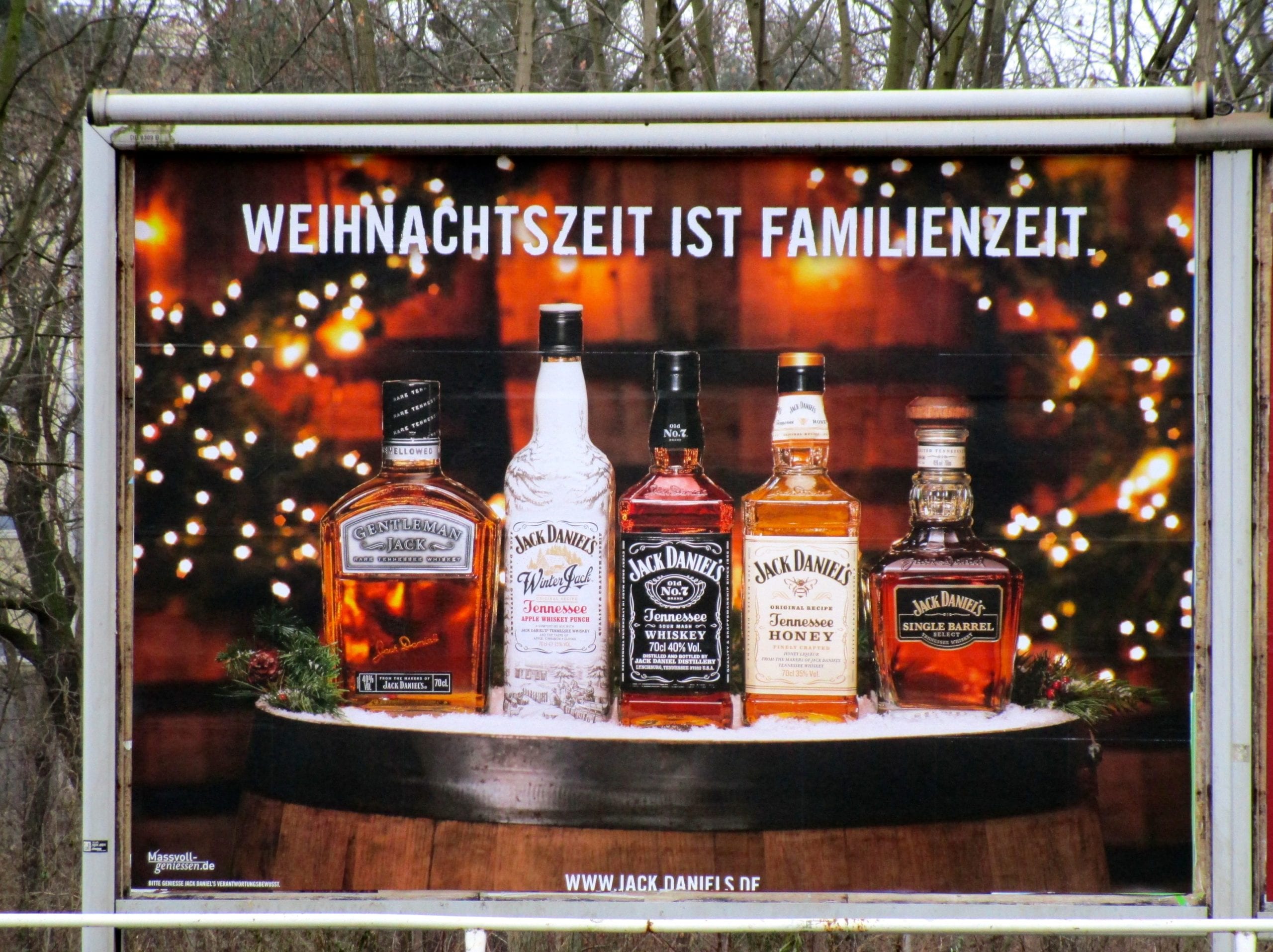 In the above example from Germany, Brown-Forman, owner of the brand Jack Daniel’s and among the biggest alcohol producers worldwide, is obviously attempting to co-opt the sense of family and togetherness that Christmas generates in so many. The Brown-Forman Christmas culture is about bottles filled with alcohol that all belong to the same brand. The alcohol industry giant Brown-Forman owns the Jack Daniels brand. Brown-Forman had sales of $3.8 billion in wine and liquor in the fiscal year 2013. The company is also known for, among others in China, bribery schemes.

It’s not breaking news that Christmas has become the most commercialised holiday. During Christmas many people go into a shopping and consumption frenzy. But I think the way the alcohol industry is attempting to commercialise and press profit out of family values is appalling.
Are we meant to just ignore and forget the fact that alcohol is tearing families apart in societies around the world?

Looking at the tactics of the alcohol industry in marketing their harmful products as aggressively and ruthlessly as they can, one can identify a clear trend: Nothing seems to be holy anymore. Not Christmas. Not family. Not even winter, snow and winter landscapes. 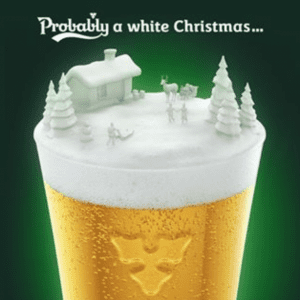 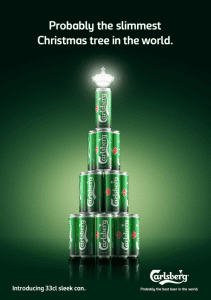 Traditions, customs and culture are not simply associated with alcohol, they BECOME alcohol.

Carlsberg is the world’s fourth largest beer producers and has also admitted to using bribery schemes.

According to this corporation, the most magical winter wonder landscape is made of beer foam. By now it’s clear that for the alcohol industry, Christmas culture is nothing but alcohol culture with a little bit of snow and Christmas decoration on it. It’s just another holiday to consume as many and as much of their products as possible.

I don’t think that this corporatization and alcoholization of Christmas comes in anyway close to what this holiday is supposed to mean. And yet there are surprisingly (read: shockingly few who call out the alcohol industry, who oppose and who provide a different narrative)

In this context, I feel very inspired and quite honestly deeply touched by the many IOGT members around the Christmas-celebrating world who stand up for what Christmas is really all about: family and children.

In the Nordic countries, IOGT International Member Organizations continue to successfully run their Vit Jul (White Christmas) campaign. This year it broke records in Iceland, Sweden and Norway. The White Christmas campaign stands on two pillars: 1) to encourage adults to pledge spending the Christmas holidays alcohol-free because their children deserve it, and 2) to support IOGT members to conduct activities and provide safe and enabling environments for children who have (otherwise) nowhere else to go when alcohol is making their home an unbearable place.

In Sweden a new record of more than 26.000 people have pledged an alcohol-free Christmas. In Iceland, there were more than 2000 people and in Norway the record number of more than 13.000 people pledged to spend the Christmas holidays fully aware with their children and relatives. And IOGT clubs in Scandinavia as well as in Central Europe and North America have all been conducting many activities for children and young people who would otherwise be forced to stay at home with adults under the influence of alcohol.

Surveys tell us that children often get scared when their parents and relatives start using alcohol. The reason is that children are sensitive to their surroundings and to how adults behave, but they don’t understand (yet) why their dear ones start acting strangely. This uncertainty causes anxiety – instead of joy and lightheartedness. For example, more than half of Swedish 6- to 12-year olds say that adults become different and strange when they use alcohol (source in Swedish).

Alcoholized parents and relatives are however now even the biggest problem (shockingly) that children and youth face. There are those homes where children have to deal with alcohol-addicted parents. For those children Christmas is the worst time during a year, because there’s usually nowhere else to go. Obviously schools and other government-sponsored environments are closed. Leisure time facilities are closed and even commercial environments are not open. Not even the homes of friends are available for most children of alcoholics. It’s in this context that voluntary initiatives to open doors and offer safe and enabling environments for those who need them are essential. And it’s in this context that really shows what the alcohol industry is all about: ruthless pursuit of profits, no matter who the victim might be.

In the European Union there are at least 9 million children of alcoholics. The USA records 11 million children under the age of 18 growing up with at least on alcohol-addicted parent. Canada registers 6,6 million and Australia approximately 34% (1 million) of the children grow up with at least one parent who is an alcoholic. We don’t have these records from low- and middle income countries in Africa and Asia, unfortunately. But we can see that in these Christmas-celebrating countries a substantial number of children has to grow up with alcohol-addicted parents.

Different cultures. Different Christmas’… if the alcohol industry could have it their way, Christmas would be all about alcohol – as their commercials show.

But the Christmas culture that tends to what’s best for our children and that takes care of everyone’s needs is also out there. And it is growing. We see that there are two fundamentally different concepts of what Christmas should be about – the alcohol-christmas and the White Christmas. For me, having been blessed with another Christmas with my dear family, it’s no question that everyone, all children and youth deserve a White Christmas.

Youth Speaking Out For Life Free From Alcohol Ads