When millions in the USA and around the world gather to follow the 49th Super Bowl, a lot will be on the line – more than you’d think. The welfare and well-being of our children will be on the line, and this article explains how and why…

In less than four hours (yes, the NFL runs a countdown on their website), a football game in the USA will be kicked off.

It’s the 49th final of the National Football League (NFL), called Super Bowl XLIX. The New England Patriots will face the Seattle Seahawks in the University of Phoenix Stadium in Glendale, Arizona. For these teams and their fans a lot will be on the line: honor and prestige, a place in sports history, money, endorsements deals and profits.

Health of millions of children on the line

But beyond the parameters of sports-entertainment that is the NFL, much much more is on the line. And I’m not worried about the score, the halftime show, the performance of the players, or even about the final result. I’m worried about the millions of children that will be exposed to harm.

One year ago, the telecast of Super Bowl XLVIII attracted a record number of viewers: it drew an average audience of 111.5 million viewers. The game was viewed in over 53 million homes and had a preliminary 46.4 U.S. household rating. Additionally, Nielsen SocialGuide noted that 5.6 million people in the U.S. sent 25.3 million tweets over the course of the entire game.

That is good news for the NFL and its sponsors. It is, however, very bad news for the millions of children who are also watching the game. Two infographics that analyse last year’s Super Bowl are showing you why:

Super Bowl commercials (see 2015 ads) are an event in themselves – and receive wide attention before, during and after the game itself. Multinational corporations, largely those like the alcohol, automobile, food and beverage industry, that belong to the Corporate Consumption Complex, are increasingly seeking to link their commercials to social media, in order to reach more and more, and young and younger people – beyond the limited time that their commercials aired during the actual game.

The winner of last year’s “Hashtag Super Bowl” was the alcohol industry. 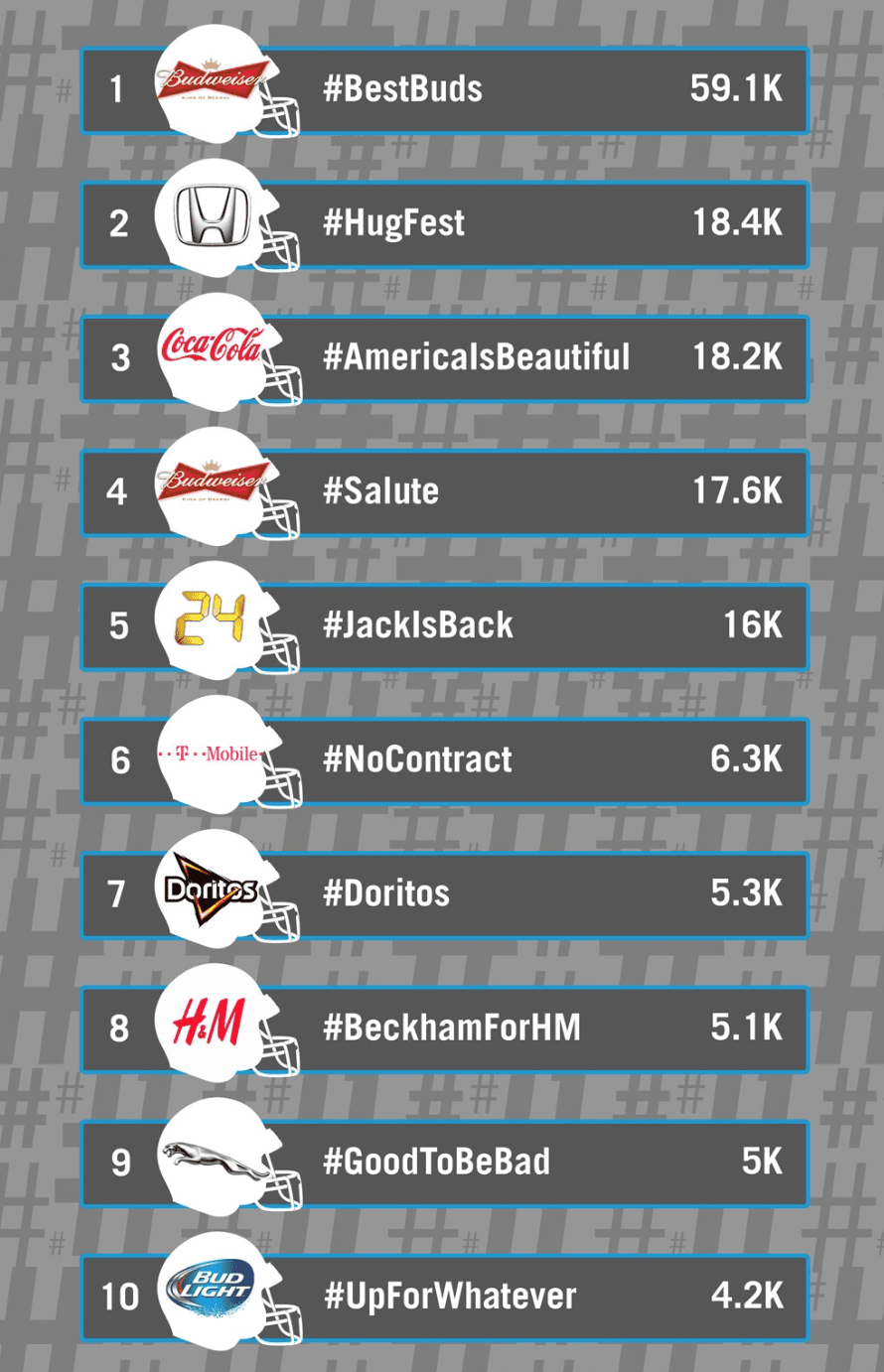 Number of Hashtag mentions during the 2014 Super Bowl, as measured across Twitter using Hashtracking™

Budweiser and BudLight are both brands that belong to alcohol industry giant Anheuser-Busch InBev (ABInBev), a Belgian-Brazilian-American multinational beverage and brewing company headquartered in Leuven, Belgium. It is the world’s largest brewer holding a 25% of global market share.

Do you see who’s talking to your kids?

I should dedicate a whole separate blog entry about their hashtag #UpForWhatever because it goes so obviously against their own “responsibility” messaging.

But the point of this article is a different one: while the NFL earns huge profits from the sponsorship deals with the alcohol industry, and while ABInBev bolsters its profits with their heavy, expensive and aggressive advertising campaigns during the NFL season and during Super Bowl, it is society that loses out – because children in the US and around the world are put in harms way.

Let’s examine some of the evidence:

There are many studies that show these correlations. Here’s a very recent one, from researchers at Dartmouth University. Researchers found that alcohol marketing is a key modifiable risk factor for early onset of alcohol use and for binge alcohol consumption.

Scientists asked about alcohol use in more than 2,000 U.S. teens, 15 to 20 years of age. They wanted to answer the question whether children, when presented images of alcohol commercials, would say they had seen them or liked them. They airbrushed any indication of brand, and asked teens if they could tell which brand of alcohol was being advertised. For their survey, the researchers collected more than 300 alcohol advertisements that aired on American television during the prior year. From each of these ads, a still photo was captured. These stills went into a pool of images from which 20 were randomly drawn for each survey.

Based on the responses, the researchers created a score that measured how familiar teens were with alcohol advertising. The questions was whether exposure to alcohol commercials would predict whether or not teens transitioned from never using alcohol to trying alcohol, or from trying alcohol to engaging in binge alcohol consumption.

To make sure that any effect seen was due to the content of the alcohol ads, the Dartmouth team of scientists also captured fast-food ads, created stills from these ads and put together a score for familiarity with fast-food television advertising. They also obtained information about how many of the respondents’ friends were using alcohol, how much their parents consumed alcohol, and how much the kids like to take risks.

All children were then resurveyed one to two years later.

And what the study found is highly relevant for tonight’s Super Bowl (and other sports events that are sponsored by the alcohol industry): A lot of American teenagers made alcohol use transitions. For instance, about a third who, at the beginning of the study, had never tried binge alcohol use had begun to binge consume by the follow-up survey.

The question the researchers posed was: Which characteristics at the first survey predicted starting to binge consume alcohol at the second. The key risk factors they found were:

All else being equal, teenagers who scored highest on familiarity with alcohol ads were more than four times more likely to take up binge alcohol consumption compared with low scoring ones.

Unfortunately, U.S. youth (as well as children and youth in other parts of the world) in this age range commonly start binge consuming alcohol and often report problems because of their alcohol use. The problems range from fighting and sexual encounters they regret, to injuries and deaths youths sustain when they drive under the influence of alcohol.

This evidence is quite clear: What seems like a good deal for the NFL and the alcohol industry, is truly a bad deal for society.

Alcohol sponsorship doesn’t belong where children are present. It’s that simple. Alcohol advertising should be banned. The welfare of our children should be more important than the profits of the alcohol industry.

Alcohol Advertising and Promotion: Excerpts from The Surgeon General’s Call to Action To Prevent and Reduce Underage Drinking