Alcohol is a major obstacle to development in Uganda, linked with food insecurity, gender-based violence and HIV/Aids – and it places a disproportionate burden on young Ugandans. Even President Museveni has started to voice grave concerns…

He was quoted in one of the national newspapers the Uganda Daily Monitor.

A burden on the young

The president has been spot on many times about the harmful effect of alcohol in the country. Alcohol harm is of great concern in Uganda which has one of the highest estimated per capita consumption of alcohol worldwide.

I want to agree with President Museveni, based on evidence from several studies and projects done in Uganda. They show that alcohol consumption has reached unprecedented levels especially among young people. The huge costs that come with alcohol harm may be difficult to assess and comprehend.

Expressing deep concern over alcohol use among youth, president Museveni has cautioned young Ugandans that engaging in alcohol consumption kills their innovativeness. Mr. Museveni was addressing hundreds of people who turned up for the Bugwere Transformation Initiative (BUTI) convocation.

A dissection of the president’s argument will show that alcohol also has effects of a depressant and that it thus makes youth apathetic and impaired, such that it has become a risk factor in the food shortages and famine becoming a persistent problem in Uganda. Alcohol is a serious causal factor but has been sidelined from the discussion so far. That is why I am happy the president has identified this issue.

The critical impact of an un-regulated alcohol environment in Uganda, how it impacts food production negatively, and how it increases poverty, domestic violence, unemployment and other issues of national development need to be thoroughly examined. An policy environment that regulates alcohol cost-effectively and strictly, employing evidence-based measures would provide a panacea for development and help citizens escape famine and other ills.

Regulation of alcohol in Uganda will come with a lot of dividends for the economy in terms of increased food production and unplanned diversion of food crops for alcohol production. We can argue that the benefits will supersede the supposedly earned alcohol revenue, which is eaten away in terms of substance abuse treatment, law enforcement costs and mental health and crime related problems.

Turning to major food crops to make beer by the alcohol industry has started to interfere with food security in Uganda.  Household heads are selling all their food to get money and end up using it to buy premier cheap beer and other local gins. Because husbands (and wives) are spending more time consuming alcohol, consumption is seriously affecting their contribution in terms of digging and planning for food production. Most of their productive time is spent consuming alcohol and then nursing hangovers. Alcohol consumption has been made so cheap and easy by way of small sachet packages (which fit into a shirt pocket).

Binge consuming alcohol (up to 40% ethanol) many young people are found drunk in villages and small trading centers in the wee hours of the morning, nowadays. Bars and other alcohol vendors start selling alcohol as early as 8am, yet this early morning time could be translated into food production time. Generally food production has gone down since most of it has been left to women.

A project currently undertaken by the UYDEL and Georgia State University in urban slums of Kampala has revealed a more unfavorable report on alcohol consumption and high levels of alcohol exposure among the youth. 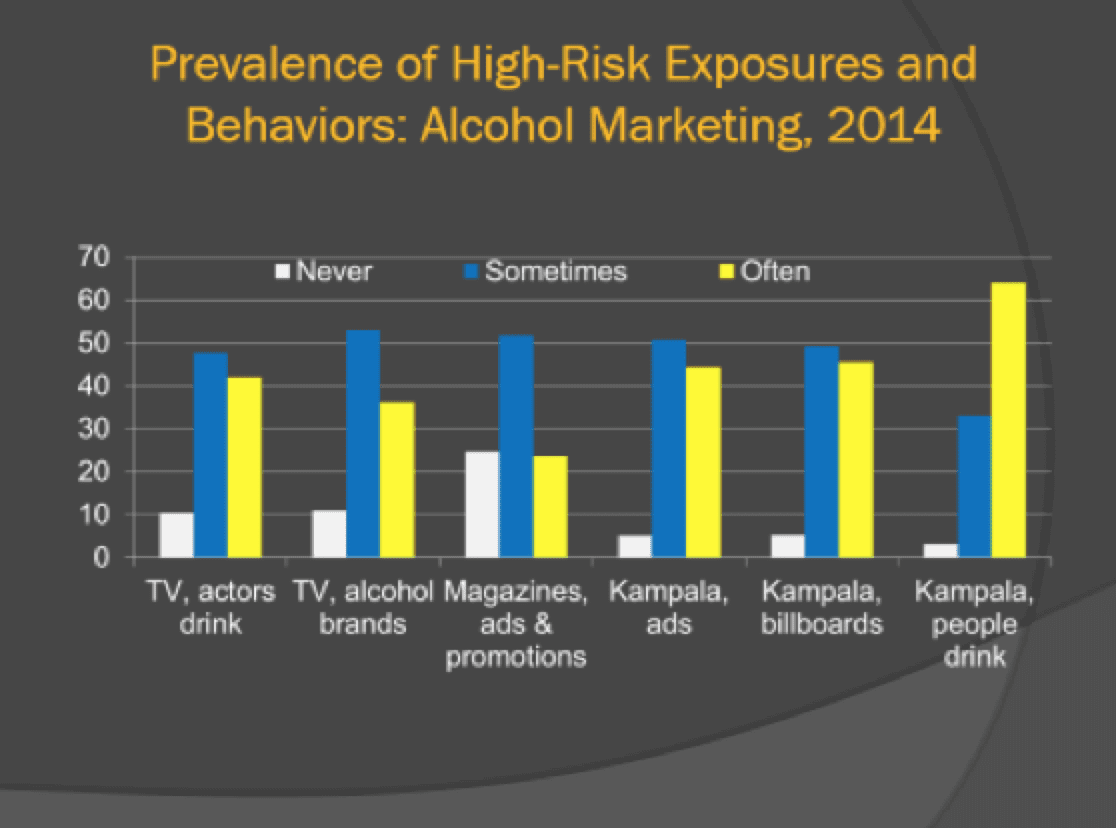 Exposure to alcohol advertising and ownership of alcohol promotional items increase the risk of alcohol use among adolescents (Hurtz et al., 2007).

What has been noted is that out of 1134 youth interviewed, 50% consume alcohol more than twice per week and 72% consume alcohol with their friends. The study also indicated that 56% 0f youth never used a condom and 46% report sex with three or more partners and 17% had been raped.

The president warned that

We need to battle this serious problem and measures have to be taken. The youth must be informed of the dangers that alcohol can cause. The youth should not shorten their lives by taking too much alcohol and engaging in prostitution.

Most energetic youth spent their time on alcohol all the time and eventually it leaves their cheeks and mouth completely swollen because of too much liquor. This is not good because it is slow suicide.”

Addressing structural factors by curbing risk factors at interpersonal and neighborhood levels addressing social and sexual networks and change norms and environments that make alcohol use by youth in Uganda permissible. Monica Swahn, professor at Georgia State University noted in the Kampala Youth Survey that high-risk youth living in the slums of Kampala report a high prevalence of HIV and related sexual risk practices as well as sexual victimisation. Alcohol is a major risk factor in the epidemics of gender-based violence and HIV/AIDS.

In this context it is clear that stronger efforts to reduce and delay alcohol use will be particularly important. There is an urgent need to address policy issues, formal and informal production and marketing of alcohol. There urgently requires that Uganda

These measures provide hope. They will limit exposure, curb alcohol marketing, regulate the alcohol industry and put in place the absent national policy to address the huge problem posed by alcohol in Uganda.