Devolution of alcohol control functions to country governments has resulted in chaos and some unforeseen consequences. In this blog post, Adrian takes a look at three lessons learned from Kenya’s experience…

Earlier this year, Kisumu, Kenya’s third largest city, played host to the nation’s 2nd National Devolution Conference which brought together over 4,000 delegates drawn from various National government agencies and departments, county governments, the private sector, development partners and other non-state actors. The goal of this conference was largely to track progress made as far as achievement of the nation’s devolution aspirations which revolve around three major components:

Through Kenya’s current constitution that was promulgated in 2010, two tiers of government were created: One at the National level and 47 at County level (similar to local governments in other countries) which are both distinct and inter-dependent, the two levels of government were further allocated different functions.

The devolution conference is one of those platforms where different stakeholders take time to assess the extent to which these functions are being implemented in a way that promotes Social and Economic development and the provision of Proximate, Easily Accessible services throughout the country as espoused in the constitution. The success of this process will ensure that all Kenyans irrespective of their gender, tribal or religious affiliation are able to access the highest attainable standard of health, education, clean and safe water as well as the right to social security. The other underlying goal of devolution is the promotion of democratic principles with the hope that this will eventually translate to economic growth and prosperity for all. Whether this is achievable is of course debatable and a discussion for another day.

Among the many service functions that were devolved to the newly established administrative units is liquor licensing and drug control. The National Drug Control Authority-NACADA had only taken up this function in 2010 following the Enactment of the Alcoholic Drinks Control Act also famously known as Mututho laws. Unknown to many Kenyans, prior to 2010 this function was previously coordinated by liquor licensing courts whose role was limited liquor licensing. All other critical components relating to Alcohol control such as the provision of regulations for promotion and advertising, treatment and rehabilitation services and quality control were not comprehensively addressed.

The enactment of the Mututho laws in 2010 therefore allowed all components related to alcohol control to be coordinated by one agency i.e. The National Drug Control Authority-NACADA.

Now back to devolution and alcohol control: the framers of the constitution anticipated capacity gaps within these new devolved units while taking up the new functions. They therefore made provisions for phased transfer during which national bodies like NACADA were to assist county governments in building their capacity in preparation for taking up the liquor licensing function. NACADA therefore developed a model county alcoholic drinks control bill that was to be adopted in each of the 47 county assemblies and went further to train county officials on the same. However due to political pressure from county governments, the national government surrendered all the functions ahead of schedule in 2013, phased transfer of the functions was thrown out and all the functions were transferred to county government with immediate effect.

This scenario brought about an interesting dimension for alcohol control in the country: for close to one year after the transfer of functions to county governments, liquor licensing across the country was not very well coordinated. This is because the county governments lacked the necessary legal framework and capacity to effectively take over this function. Unfortunatlely during this period alcohol outlets in different parts of the country were said to flout some of the key provisions relating to alcohol control such as:

It was during this transitional period that over 100 Kenyans died and 98 were hospitalized as a result of consuming alcohol that had been adulterated with Methanol. 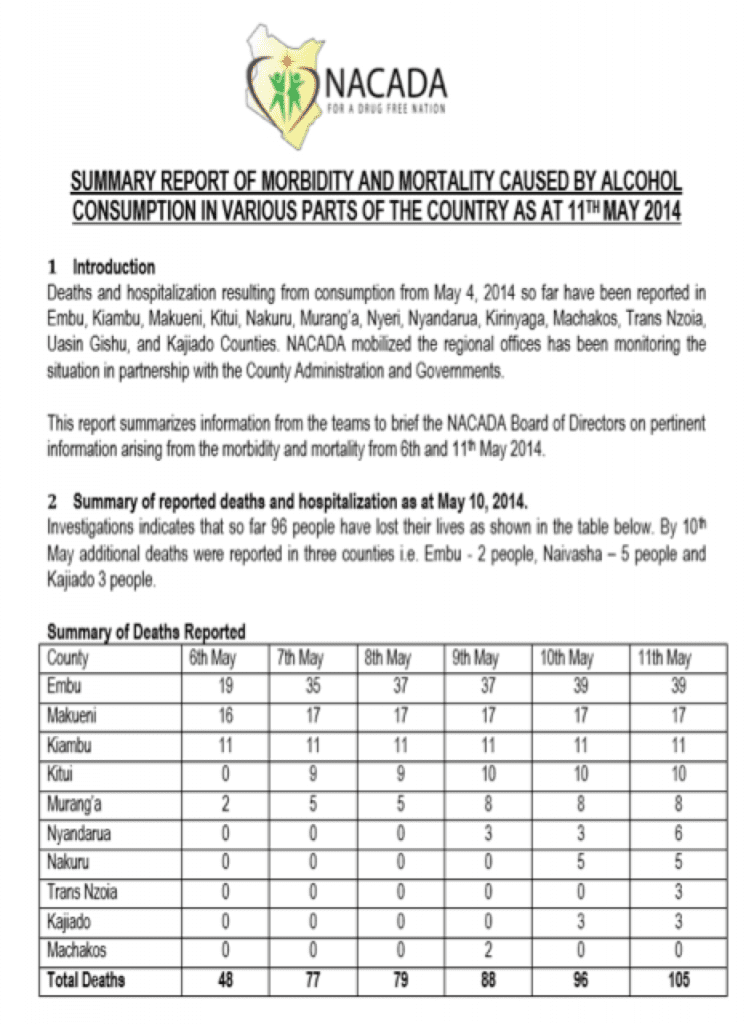 My hopes were that owing to the glaring health and socio economic challenges that the nation continues to experience daily attributable to alcohol and other drugs this could have formed one of the agendas to be discussed at the devolution conference.

The conference would have provided county governments with a platform to address some of the challenges they have faced after the takeover of this function. One of the county governments has since suspended the licensing of new alcohol outlets as they outnumber the schools within the same area, others have over the last three months embarked on closing down outlets that are flouting various provisions of the county alcohol control laws.

The motivation by some of the county governments to fastrack the enactment of the liquor licensing laws has been due to the anticipated revenue that will be collected from the fees and not necessarily the need to address the harmful effects of alcohol use to the community. The devolution conference would have also been a great platform to hold individual county leaders to account especially on the enactment of county laws on alcohol control. It’s estimated that out of the 47 county governments only 10 have relevant legislation on liquor licensing.

Key lessons can be learnt from Kenya’s experience of devolving the much needed alcohol control function especially for non-state actors:

As I conclude, I must admit that I was disappointed that the only mention of alcohol during this year’s conference was the amount spent by the organizers on different alcoholic drinks for the delegates during a banquet hosted by the County Government of Kisumu. As Leonardo da Vinci once said:

It had long since come to my attention that people of accomplishment rarely sat back and let things happen to them. They went out and happened to things.

We have eleven months to the next devolution conference which is scheduled to take place in April 2016. We can start to lobby for the inclusion of the alcohol control agenda this early and make it happen.

Get to know Adrian

Jambo! Welcome to my blog!

I feel extremely privileged to be part of this global conversation about Alcohol Control.
I am passionate about creating a positive environment that allows young people to enjoy a high quality of life free from the influences of alcohol and other drugs.
I will be sharing my unique experiences and reflections drawn from working with communities and relevant state actors engaged in Alcohol Control. I am currently working with Kenya’s Alcohol and Drug Abuse Prevention Authority (NACADA) and I am also a founding member of The Kenya Alcohol Policy Alliance (KAPA).
I hope you will find this blog informative and I look forward to hearing your feedback and remarks.
Ashe (Thank you)!

Other recent posts by Adrian Njenga

9 comments on “Alcohol Control And Devolution In Kenya”