Charlize Theron Promotes SDG3, Or Does She?

Exposing contradictory messaging in efforts to raise awareness of the new sustainable development goals. We need to hold UN agencies to a higher standard when they select celebrities for collaboration on noble causes. Charlize is not the only example where commercial activities run directly counter to social causes…

I’m very pleased that we as IOGT International will be in New York at the United Nations this week, representing all our Member Organizations, and advocating for a robust and comprehensive post-2015 agenda that addresses the major obstacle to development, that is alcohol.

For the first blog post in this series, I would like to start in a simple way.

The United Nations has mounted a public relations effort and is campaigning to raise wide awareness of the new sustainable development agenda. Maik has posted another blog with one example from the UN campaign for the SDGs, the so called The Global Goals campaign – his dizzy penalty attempt is hilarious. Check it out.

Besides The Global Goals, the UN has also teamed up with world-famous celebrities that help raise awareness of specific goals from among the SDGs agenda.

One such celebrity is Charlize Theron, a famous actress from South Africa. Charlize chose to take a few seconds out of  her busy schedule to promote the importance of SDG3. 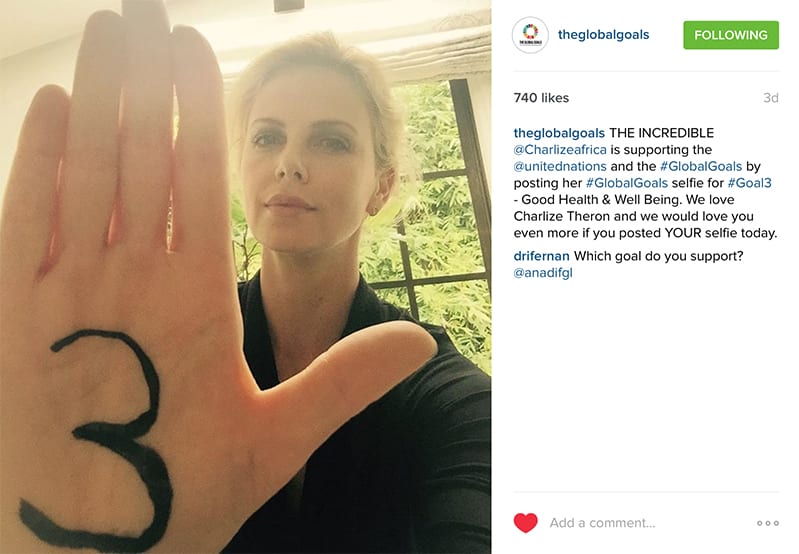 That’s a noble gesture of Charlize, I think. It’s simple and doesn’t take much. I don’t think she is walking around with a permanent tattoo of the number three on her hand. But for sure it is better to share this simple gesture and help to spread the message than remaining ignorant.

However, the example Charlize and her promotion of SDG3 also highlights the problems and pitfalls that celebrity involvement in social causes like raising awareness of the sustainable development agenda sometimes brings with it.

Charlize Theron has also been endorsing alcohol, and has collaborated with the alcohol industry. A decade ago she did commercials for Bacardi-Martini. But the commercials are still online, still available, still associate her with the glamorisation of a really harmful substance.

Her commercial is not only problematic in glamorising alcohol and endorsing the alcohol industry. It also sexualises women and portrays women as an object for male desire. So, in this one commercial we see how celebrities can contribute to harmful behaviour and norms.

Charlize’s commercial activities run directly counter to the goals of the UN development agenda. It’s a conflict of interest, quite obviously. Painting a number three on your hand and taking a selfie doesn’t cost anything. Collaborating with the alcohol industry earns Charlize a lot of money, but it costs even more – in the communities that suffer from alcohol harm and in the societies that are burdened by the tactics of the alcohol industry, including Bacardi-Martini.

I think we need to hold UN agencies to a higher standard when they select celebrities for collaboration on noble causes. Charlize is not the only example where commercial activities run directly counter to social causes. Mr. David Beckham is another example.

Alcohol is an obstacle to development. As such it is addressed by SDG3, in a separate target. I hope that we can find more positive role models that help us promoting The Global Goals in general and SDG3 in particular.

Dizzy Penalty #1 For The Global Goals