If You Could Save The Planet, Would You?

Human kind is depleting the resources of the earth. But saving our planet is not (just) about different energy sources, less traffic and more energy efficiency. Saving the planet is about what you and I choose to put into our mouths…

If you could save the planet, would you?

Imagine that you could change your consumption patterns and a lot would get right from day one. You would help restore the nature of our planet and with that you would restore several human values.

Climate change is a fact. It is a change that does not benefit the humans, animals or plants of the earth. I guess we all have experienced it fully around the end of the year. From floods in India, to a 10 to 15 degrees warmer December than usually in Scandinavia or New York.

There is an ecological disaster going on in front of our eyes. But are we really looking at it?

It is not news to anyone that environmental problems are human made and human driven. We know it is our own daily behavior that is behind it and more and more people are committed to reversing the trend. We learn (and try) to spend less electricity, less water, less fuels… We replace plastic bags with fabric bags. We recycle more. We choose a trip by train instead of plane when possible. We take a shower instead of bath. We use public transport. Those who can afford it, buy electric cars. Companies and organizations are developing policies to reduce their environmental footprint.

We do all that and yet, we are missing one powerful measure that could help avert the disaster. Reducing the impact of animal agriculture. Animal agriculture is responsible for:

That is unfortunately all our doing, due to our meat and dairy consumption.

Simply put, we are wrecking the planet with what we choose to put in our mouths…

Our planet is not big enough for all the fields we need for grains to grow, to feed animals that we are eventually going to eat and it is not big enough to accommodate all the animals we breed to end up on our plates. We are around 7 billion people on Earth and there are 70 billion animals raised for our food. That is lots of methane, lots of space and lots of waste (yes from the excrement) that goes right into oceans and creates dead zones there in the place where all the life came from.

That is not sustainable whatsoever. So what to do?

Those four facts are alarming on their own. But what’s even worse is, that we eat meat and dairy products and consume alcohol products at the expense of someone else.

82% of the world’s starving children live in countries where food is fed to animals in livestock systems that are killed and eaten by more well-off individuals in the ‘developed’ countries such as US and Europe.”

The system of consumption that humans have built, does simply not serve humanity. We live in a world of gigantic multinational corporations

What they don’t want you to know – and do

All those practices I enumerate above are essentially about two things:

Evidence – that too few people are currently aware of – shows that we can produce on average 15 times more protein from plant-based sources than from meat, on any given area of land.

Well – that sounds promising. And here we are coming back to my question. Would you choose to save this planet if you could?

Would you reduce your intake of animal products if you knew your are making a huge difference?

I like simple solutions to our so called complex problems. And I simply can’t enjoy life that I know is detrimental to other people, to nature, to the earth.

But what can one person do? I am not even a drop in the ocean. ‘What kind of impact can I have’ you would say. 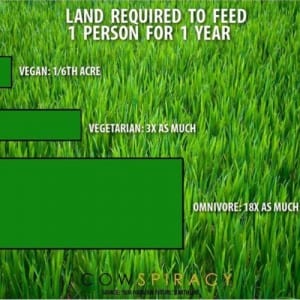 A vegan diet saves per day:

We know from Framingham Heart Study that behavior of one individual has impact on the lifestyle of others in the social network they live, work, spend their leisure time in and thereby influence the entire community.

This blog is inspired by the movie “Cowspiracy” I saw a month ago. I have seen it thanks to an IOGT-NTO club in Stockholm called Vildvuxen that arranges awesome activities such us stand up comedy evenings, graffiti mornings, pizza and movie. Through those activities Vildvuxen challenges the current norms – our daily diet being one of them. The event was just amazing – it combined tasting of alcohol free drinks, socialising with people, eating vegan pizza (extremely tasty) and watching the movie that opened my eyes and gave me concrete solutions to take home with me.

I have been sober my whole life, vegetarian for more than a decade and now I go vegan. And believe me…it is not about taking something away. It is about finding something new and better – for everyone.

Beyond behaviour as consumers – like choosing alcohol-free drinks and animal-free foods – what will bring change is our behaviour as citizens. We need to become aware not just of what we put into our shopping carts (and ultimately into our mouths), but also of the actions our politicians are taking or not taking and the influence that corporations are exerting on them. We need to become heart-driven citizens demanding change – to save our planet, for a better present and brighter future.

For the references taken from Cowspiracy, follow the link