Updated guidelines for alcohol consumption in the UK

The UK chief medical officer, Dame Sally Davies, conducted a review of NHS guidance on alcohol, which had been established more than two decades ago. It found:

The new UK alcohol guidelines advise, there is no safe level of alcohol intake for either sex. The guidelines also issue a serious warning that any amount of alcohol use increases the risk of developing a range of cancers. They recommend a maximum consumption per week of 14 units (down from 21 unites for men), for men and women. The guidelines also recommend avoiding binge alcohol intake. And it is recommended to refrain from alcohol use during pregnancy.

What we are aiming to do with these guidelines is give the public the latest and most up to date scientific information so that they can make informed decisions about their own drinking and the level of risk they are prepared to take,” said Dame Sally Davies.

The Dietary Guidelines for Americans is a resource for health professionals and policymakers in their work to design and implement food and nutrition programs. The message from the secretaries says:

One of our Government’s most important responsibilities is to protect the health of the American public. Today, about half of all American adults—117 million people—have one or more preventable, chronic diseases, many of which are related to poor quality eating patterns and physical inactivity. In 2008, the medical costs linked to obesity were estimated to be $147 billion. In 2012, the total estimated cost of diagnosed diabetes was $245 billion, including $176 billion in direct medical costs and $69 billion in decreased productivity.”

The Dietary Guidelines mention alcohol once, addressing it in appendix 9 – because it is not a component of the USDA Food Patterns. The text reads:

If alcohol is consumed, it should be in moderation—up to one drink per day for women and up to two drinks per day for men—and only by adults of legal drinking age. For those who choose to drink, moderate alcohol consumption can be incorporated into the calorie limits of most healthy eating patterns. The Dietary Guidelines does not recommend that individuals who do not drink alcohol start drinking for any reason; however, it does recommend that all foods and beverages consumed be accounted for within healthy eating patterns. Alcohol is not a component of the USDA Food Patterns. Thus, if alcohol is consumed, the calories from alcohol should be accounted for so that the limits on calories for other uses and total calories are not exceeded…”

On both sides of the Atlantic, the alcohol industry has responded swiftly. In the UK, the pushback against the guidelines was strong, calling them “scaremongering” and “nanny state intervention”. In the US, the new dietary guidelines were hailed for their “favourable language.”

The Chief Executive of the Portman Group (an alcohol industry lobby group) said: “What is surprising is that the UK is breaking with established international precedent by recommending the same guidelines for men and women. It also means that UK men are now being advised to drink significantly less than their European counterparts.”

But there is no “international precedent”. The WHO Global Alcohol Strategy doesn’t even mention guidelines for alcohol use. Likewise, “Alcohol No Ordinary Commodity” – a collaborative effort by an international group of leading alcohol policy experts – does not address guidelines for alcohol use and instead presents evidence that “education and persuasion” measures are not at all or hardly effective in reducing and preventing alcohol harm.

And yes, British men are now advised to use less alcohol. Europe as a whole is the region in the world with the highest alcohol consumption and British men belong to the group of heaviest alcohol users among Europeans.

That the Institute of Economic Affairs (IEA) calls the guidelines “scaremongering” is expected but remains puzzling. Presenting evidence about the carcinogenicity of alcohol contributes to a fact-based worldview, but it goes against the glamorised picture of alcohol. That raising awareness of the fact that alcohol use is not healthy, not even for the heart, is “scaremongering” according to the alcohol industry, reveals what they are scared of: falling profits because people start turning to healthier options.

The British hospitality industry is on record with a misleading statement, ignoring decades of independent science, when they criticised: “What consumers need is clear, practical advise based on undisputed evidence to allow customers to make informed choices. There seems to be little agreement, even among health experts, about the evidence to back up the latest proposals.” (Katie Nicholls, ALMR).

Already in 1988 did the IARC, the WHO agency for cancer research, present conclusive evidence of the carcinogenicity of alcohol. That’s almost three decades ago and evidence since then has piled up to confirm those findings. The changes of the UK guidelines are based on evidence, unavailable in 1995 when the previous guidance was published, which also suggests the protective effect of alcohol against conditions such as ischaemic heart disease is weaker than previously believed.

Interestingly, while the IEA holds the guidelines to be “nanny state” interventions, are other Big Alcohol groups claiming that guidelines are important for consumers – just not these ones…

On the other side of the Atlantic, the Distilled Spirits Council of the US (DISCUS), got so excited about the new dietary guidelines, that they put out a news release with a false and misleading quote.

Above, we quoted the actual wording of the dietary guidelines. There is simply no such quote, as DISCUS claims.

This is a new low in the unethical practices of the alcohol industry. They have been lobbying aggressively to weaken the wording on alcohol and hinder health groups’ attempts to actually improve the wording, for example to include a message that alcohol use is not healthy and that is causes cancer (like in the UK alcohol guidelines).

DISCUS spent more than $4 million, leading the alcohol industry in the United States, on lobbying in 2015 – according to OpenSecrets.

What the guidelines do say is that “For those who choose to drink, moderate alcohol consumption can be incorporated into the calorie limits of most healthy eating patterns.” It means that when having, for instance, a Mediterranean diet, the calories from alcohol consumption (that are substantial) can fit within the daily recommended amount of calorie intake. But is does NOT mean that alcohol calories are healthy, or that using alcohol is healthy. And it for sure does not say that alcohol use helps people “achieve” healthy patterns of eating.

In fact, alcohol use is a major risk factor for obesity-related cancers.

To put Big Alcohol opposition to the guidelines in the UK in perspective, you only need to know that anti-immigration, anti-EU, right-wing populist (who is on record with racist statements here, here, here, here… ) Nigel Farage has called on people to protest against “puritanical” guidelines by going out and having alcohol for lunch.

The UK guidelines are backed up by strong evidence: They were published the same day as the latest findings by the Committee on Carcinogenicity were released. The findings show that the risk of cancer increases the more alcohol a person consumes.

Another important aspect is that the landscape of alcohol use guidelines is scattered and chaotic, different EU countries recommending different levels of consumption. 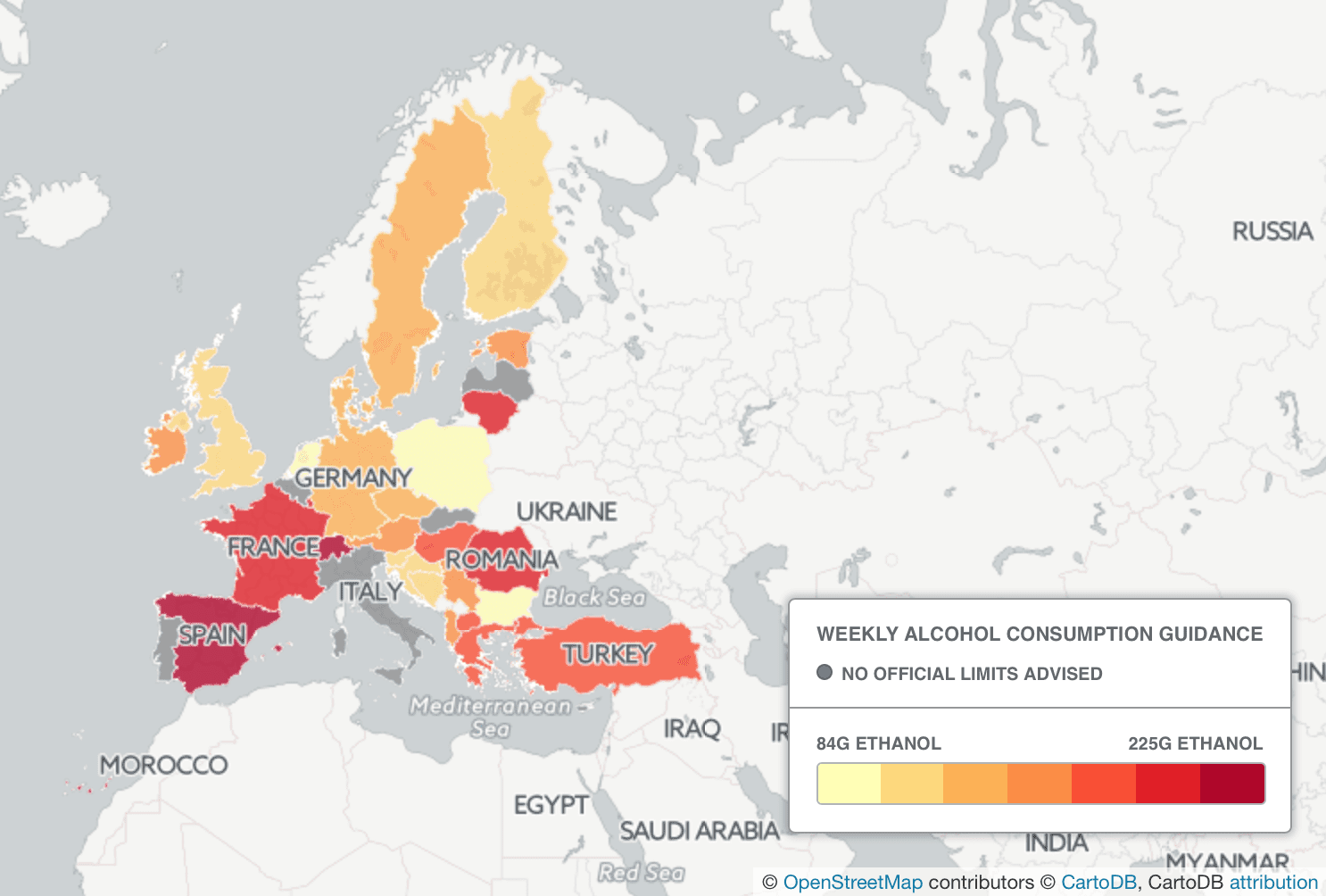 Last year, the European Cancer Code was updated and its message on alcohol is very similar to the new UK guidelines:

If you drink alcohol of any type, limit your intake. Not drinking alcohol is better for cancer prevention.”

It’s here where the case of all the new guidelines really gets curious. What is it that the federal government in the US didn’t get about latest evidence on alcohol harm? They continue to exclude wording about the fact that there is no safe or healthy amount of alcohol use. Health experts in the US write:

The entire affair is an insult to the advisory committee that worked hard to do the right thing.”

The alcohol industry is obviously not interested in telling the truth about their products. So, consumers – and citizens – are dependent on the governments around the world doing a proper job in supplying facts about alcohol.

We need the truth. Especially in the pervasive, intoxicating Western alcohol norm, we need a fact-based view of the consequences of alcohol use.

What does it all mean – making sense of the curious case

Democratically elected governments are obliged and have the legitimacy to work for the protection of citizens from harm – at least when it comes to providing fact-based information.

There is no research evidence that demonstrates that guidelines for alcohol use do in fact change behaviours. As Alcohol Research UK writes: “It is possible that a greater degree of public knowledge around units and guidelines has contributed to the decline in consumption across the UK since the mid-2000s, but it has not been demonstrated by any social research – and recent studies suggest that while the majority of us are aware of units and guidelines, only a small minority actively use them to monitor their [alcohol use]”

So, these guidelines are for sure not patronising, instructing or infantilising. Neither do they restrict any freedom to choose to consume alcohol. And honestly, the reaction of the alcohol industry to the guidelines in the US, that they perceive favourable reveals that fact. All these guidelines are, is a tiny measure for awareness about the truth concerning alcohol.

If these guidelines are patronising and nannying, what are all the alcohol adverts, billboards, sports sponsorships, etc that tell children, youth, and adults all the time and everywhere what fun, party, success, sex appeal etc. looks like and how an appealing lifestyle is like?

My point is that the playing field is not level at all. Any fact-based information about alcohol’s harm is drowned out by the tsunami of alcohol marketing that is coming over us every day, when watching football or checking on friends on Facebook, when buying groceries or toys for kids…

Beer The Obvious Truth, from the Alcohol Truth campaign, by FARE

It is for this reason, that calling for labels on alcohol products is really not enough. First of all we should not call them nutritional labels, but warning labels. Second of all, for the truth about alcohol to emerge and reach the public, we need alcohol marketing regulations and advertising bans. Who cares for health warnings about alcohol when all they can think of is glamorous football heroes with alcohol brands on their chests and all around them?

To answer a headline from The Guardian Editorial: if there ever is a situation where mere advice (on alcohol harm) is too much, we have surely reached the point where alcohol marketing from Big Alcohol is too much. But media outlets financing entire sections with alcohol industry money (like The Guardian) will not report that story.

And this is the really curious thing: the World Bank, World Economic Forum, Harvard University and WHO are all with me on this one.

The Guardian: “The new alcohol limits are a smokescreen for governmental inaction”

The Guardian: “No safe alcohol limit, new guidelines to say“

The Telegraph: “Mapped: How the UK’s new alcohol guidelines compare with the rest of Europe“

The Guardian: “Weekly alcohol limit cut to 14 units in UK for men“

Simon Jenkins, The Guardian: “The state needs to butt out of Britain’s drinking habits“

Katherine Brown, Opinion, The Guardian: “We need the truth about alcohol – it should be labelled, just like food“

The Guardian Editorial: “The Guardian view on new alcohol limits: how much advice is too much?”