An example for this fact is the Distilled Spirits Council of the United States, a lobby group of American liquor producers, and its “Seventh Annual Best Practices Media Summit”, held January 14 in Washington D.C. The summit focused on responsible social media marketing for alcohol.

On the same day, new research was published that would make the headlines and fill the news ether for days: “Adult and adolescent exposure to tobacco and alcohol content in contemporary YouTube music videos in Great Britain: a population estimate”.

In a news article on the site “Beverage Dynamics” the following sentence summarised the DISCUS event:

The new researched published on January 14, specifically addresses YouTube. It shows that a large number of music videos on YouTube contains extensive alcohol and tobacco content, often depicted with positive connotations. These videos tend to be most popular with younger audiences. However, regulators have largely been ignoring this issue.

The pattern of exposure for alcohol was similar to that of tobacco. But the overall number of impressions was five times higher.

More than four years ago, Diageo and Facebook struck a multimillion dollar deal that would allow the largest liquor company in the world to advertise on Facebook. Back then, The Guardian wrote that advertising to the predominantly young people who use Facebook had been hugely profitable for Diageo, the maker of the favorit product among most teenagers, Smirnoff vodka. 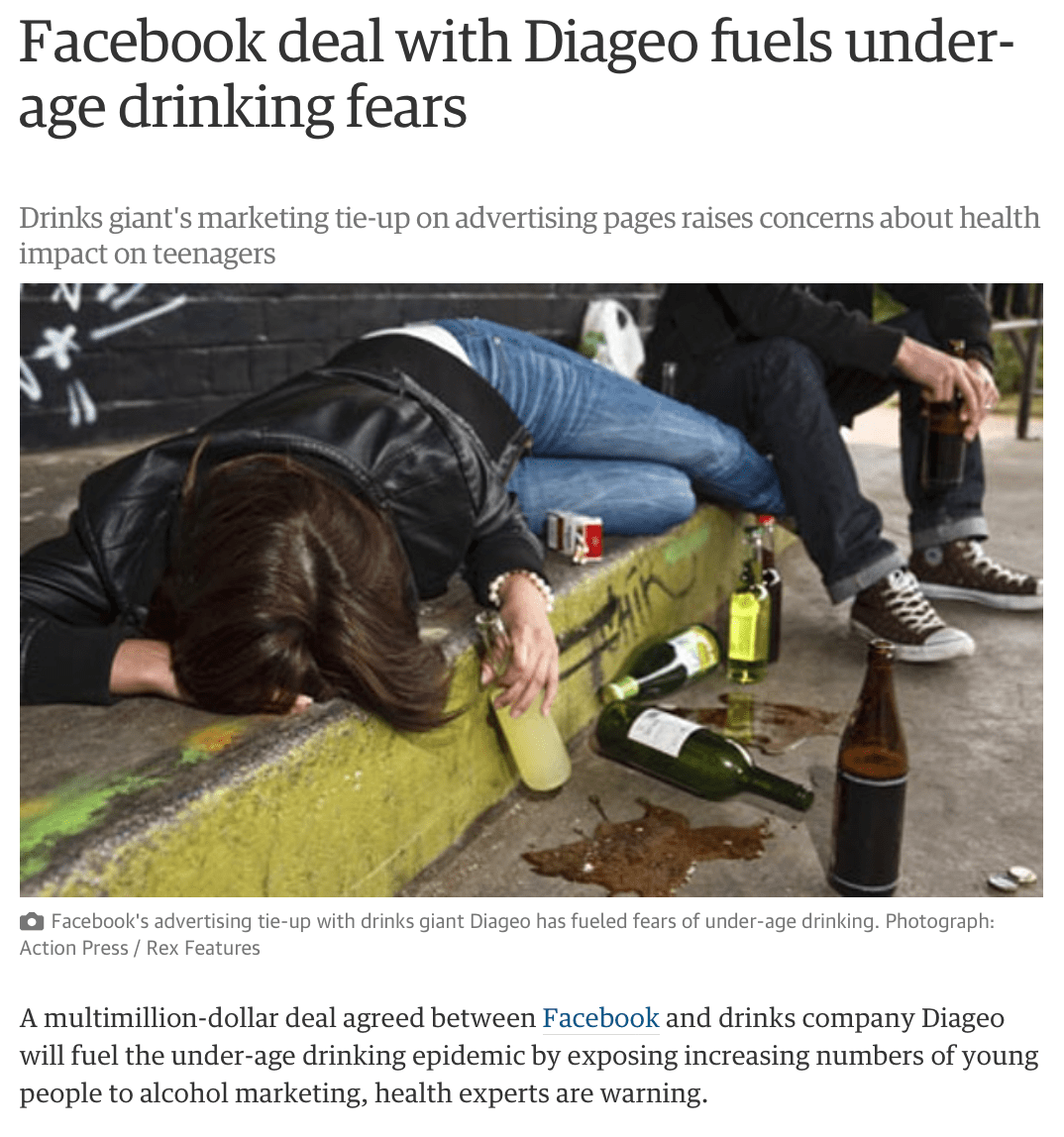 Big Alcohol systematically violating its own rules and codes of conduct

In the news article about the DISCUS event, the “DISCUS Responsible Advertising Code” is mentioned as a topic. As it happened, on January 13, just a day before the DISCUS event, new research was published that analysed youth exposure to alcohol advertising on cable television, including an analysis of how the alcohol industry lives up to its own rules and codes of self-regulation.

This is what the researchers found:

Underage youth were exposed to more than 15 billion noncompliant alcohol advertising impressions from 2005 through 2012, and almost all of these noncompliant impressions (96%) resulted from advertisements that aired on cable television programs.

Furthermore, almost all of the noncompliant alcohol advertising exposures on cable televi- sion programs (99.4%) aired on programs that were either known to have previously violated the alcohol industry’s placement standards (i.e., were serially noncompliant), ran during periods that were known to be popular among under- age youth (i.e., high-risk network dayparts), or were known to have a small number of adult viewers (i.e., low rated).”

If the alcohol industry had taken its own rules seriously, and not just used them for PR purposes, children and young people could have been protected from exposure to alcohol advertising.

And so, within just two days in the beginning of this year, it’s possible to illustrate the fact that Big Alcohol is out of touch with reality.