Do You Let Big Alcohol Fool You?

The world’s biggest beer producer, ABInBev, has launched one of the deadliest campaigns ever seen, and it is more important than ever that we can recognize their scheme and not allow this to pass unnoticed as harmless Corporate Social Responsibility tactics…

Big Alcohol has launched one of the deadliest campaigns ever seen, and it is more important than ever that we can recognize their scheme and not allow this to pass unnoticed as harmless Corporate Social Responsibility tactics.

ABInBev is the one responsible for launching the campaign “Smart drinking.”

A video is depicting several good looking and happy young adults having a dinner party, going clubbing, singing karaoke – this could very well be a commercial on its own for glamourizing alcohol use among young people. Then something starts to change:

The rest of the film is just developing as one might imagine: the person finds their ID, the designated driver returns the girl safely home, a group of people eating pizza, and then, suddenly the message is written outright clearly – “Celebrate Tomorrow, Drink smart tonight.” The official hashtag for the campaign is #celebratetomorrow. I’ll get back to why this is important to notice.

At first glance, one might say this is a harmless message, maybe even a good one, because who can argue against responsible alcohol use? However, there is only one pattern here, although in great disguise, namely Big Alcohol.

To understand why, we need to make a discourse analysis and look beyond the actual words and see the hidden message behind it.

Unpacking the responsibility and moderation message

But first, what is “smart drinking”? According to ABInBev it is “the notion of responsibility to and respect for the health, well being and safety of yourself and others – not just in the moment, but in the future”. Not now but in the future. Your future. Be responsible. Think about tomorrow. “Celebrate” tomorrow.

It is not far fetched to say that this approach, the responsibility approach, is the discourse Big Alcohol have been using for years over now. In fact, a brand analysis of ABInBev shows that they have been using the “moderation” concept since the 1930s. AdBrands.net writers:

The key to Budweiser’s success has always been its innovative marketing. At the end of the 19th century, Anheuser-Busch launched a series of innovative promotions for its beers featuring penknives and free lithographs. ‘King of Bottled Beers’ was actually the company’s first ever slogan, introduced in 1899 (and in fact borrowed directly from the German beer Kaiserbrau, or ‘Beer of Kings’). In the 1930s and 1940s Budweiser was ‘America’s Social Companion’ or ‘A Beverage of Moderation’. Later in the 1940s, Anheuser-Busch was the first brewer to advertise on television.”

The “responsibility” or “moderation” approach seems to be acknowledging the harms of alcohol while at the same time arguing for alcohol being an indispensable necessity for all social interaction. The latest ABInBev move to call it “smart drinking” is a recycled “moderation” message from the 1930s – but trying to sell it to consumers in an innovative way.

For example, we know and Big Alcohol knows, that alcohol causes cancer, that alcohol is toxic, addictive and a teratogen and that alcohol kills, a lot. They are (not) afraid to admit these things (although they are still repeating the mantra of “moderate” alcohol use and health) but their wild card is fun.

Alcohol is fun. Alcohol is great. Alcohol is everything you ever dreamed of: friends, sex, adventures, sex adventures. The sexism Big Alcohol notoriously uses is absolutely disgusting, and effective. FAKE FREE knows this as well. That is why FAKE FREE doesn’t talk about the harms of alcohol, because we know that young people find sex and partying more appealing than death and despair.

Two words: False dichotomies. We know and Big Alcohol knows: If you give people the choice between the buzz of now and the prudency of tomorrow, most people chooses the now – especially in our individualistic, consumerist culture.

ABInBev also paid millions of dollars for this Super Bowl advertisement. It finishes with the tagline “raise one to right now”. Can a CSR message be any more contradictory to an expensive, star-driven message targeting youth and glamorizing the omnipresence of alcohol in society?

But even if people didn’t choose the now over the tomorrow, and this is important to remember, they are still being taught the perpetual myth of the false dichotomy between health and fun. A deceptive choice between now and tomorrow. Therefore, Big Alcohol wants you to celebrate tomorrow, so you are fooled to believe that you are giving up on life by choosing an alcohol free one. 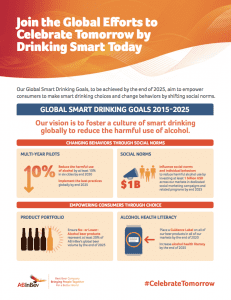 “Whatever we do, it will never be enough for you, do you expect us to just vanish into thin air?” – This is the kind of answer we could expect from Big Alcohol just by questioning their campaigns and incentives for communicating with their customers, as they so frame it. And we shouldn’t expect otherwise, the only responsibility they have are towards their shareholders, not to me, not to my friends and family and not to you.

ABInBev says they want to empower consumers to make smart choices and change social norms around alcohol. By that definition ABInBev and Fake Free have a lot in common. But: If you want to change norms, why do you repeat the myth of alcohol as a social lubricant? If you want people to make “smart” alcohol choices why don’t you depict the alcohol free life as the norm?

2 comments on “Do You Let Big Alcohol Fool You?”