Let’s call it what it is: UEFA, FIFA have to quit to put their profits over the well-being of children and families, fans and football itself. The events these days involving alcohol fueled violence should cause an urgent disqualification warning to Carlsberg as well. Like at the Fifa World Cup in Brazil, where violence erupted, after alcohol sales were re-introduced – we can clearly see that the alcohol norm needs to be disqualified…

I’ve been watching the EURO 2016 game between Croatia and Turkey today. I’ve good friends in Croatia and in the Balkan region that have Croatian roots – so I wanted to share the moment with them. Croatia played well and won the game but a different news story overshadowed everything else: England and Russia have been given disqualification warnings.

Just a few minutes ago, Swedish TV SVT1, the BBC and other EURO 2016 broadcasters reported that the UEFA Executive Committee has issued a warning directed at the Russian and English football associations, after violence in Marseille during the recent days. UEFA, European football’s governing body, said in a press release:

The UEFA Executive Committee would like to express its disgust at the violent clashes which occurred in the city of Marseille. Such unacceptable behaviour by so-called supporters of the national teams of England and Russia has no place in football, a sport we must protect and defend. The UEFA Executive Committee has warned both football associations that – irrespective of any decisions taken by the independent disciplinary bodies relating to incidents inside the stadium – it will not hesitate to impose additional sanctions on the Football Association (FA) and the Russian Football Union (RFS), including the potential disqualification of their respective teams from the tournament, should such violence occur again.”

UEFA holds the football associations, and quintessentially also the respective national teams, accountable for the behavior of their “fans”. Reports say that Marseille, the city where the England-Russia football game took place, has been shaken by violent clashes between French youth, Russian, and English supporters and the French police and security forces. UEFA makes clear that it will not hesitate to take the most far-reaching measures in order to stop and eliminate the violence. I applaud them for what they have said now.

Calling it, what it is

But I also have to say that more could have and should have been done to prevent this violence. But what? Let’s look at the elephant in the room and call UEFA actions what they are. The BBC writes:

In the steamy, humid environment of this port city, with alcohol flowing freely, all the ingredients were in place for events that unfolded in the Vieux-Port de Marseille.”

In another article by BBC writer Ben Mundy reports:

Where were the police inside the stadium? Why was more not done to influence an alcohol ban ahead of such a potentially-volatile fixture? And why was the segregation in Stade Velodrome so obviously inadequate before the trouble erupted at the end of the game?”

And the Herald Scotland reported that Samia Ghali, a Marseille senator, said:

When you see drunken hooligans hurling bottles, I think you realise that it’s necessary to impose restrictions on the sale of alcohol to make it easier to maintain order.”

On Twitter, Martin Fricker, a Daily Mirror senior reporter, delivers news from Marseille and this picture struck me.

This pretty much sums up the day (top snap by Getty’s @Carl_Court) … #EURO2016 #ENG #RUS pic.twitter.com/5EdV6YJUXS

In this picture, a lot is going on. But at center stage, too, is beer.. 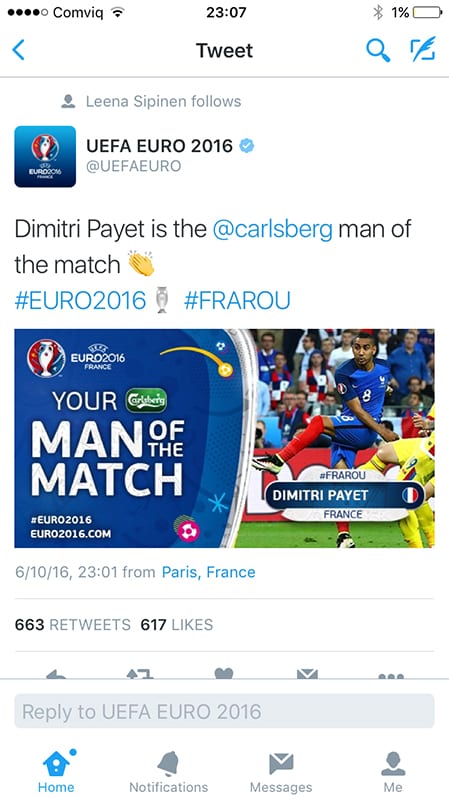 Carlsberg promotion after the game 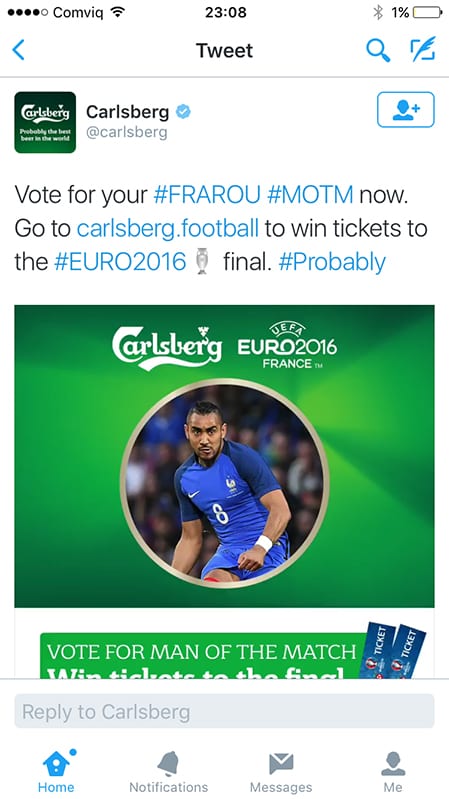 Carlsberg promotion during the game

That’s what Carlsberg and the UEFA Euro 2016 twitter actiicites look like. And this is an example of what it looks like in every single game, frequently… 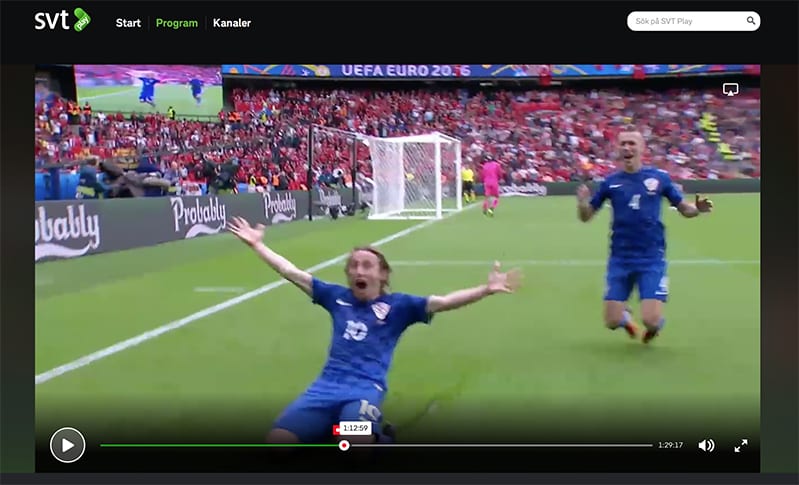 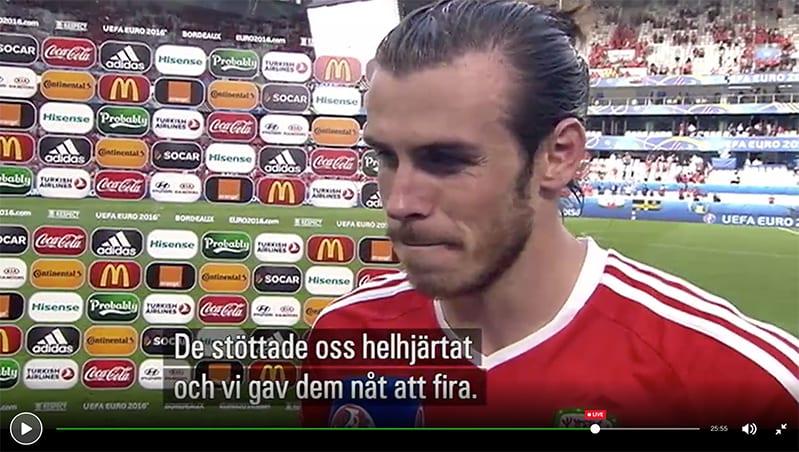 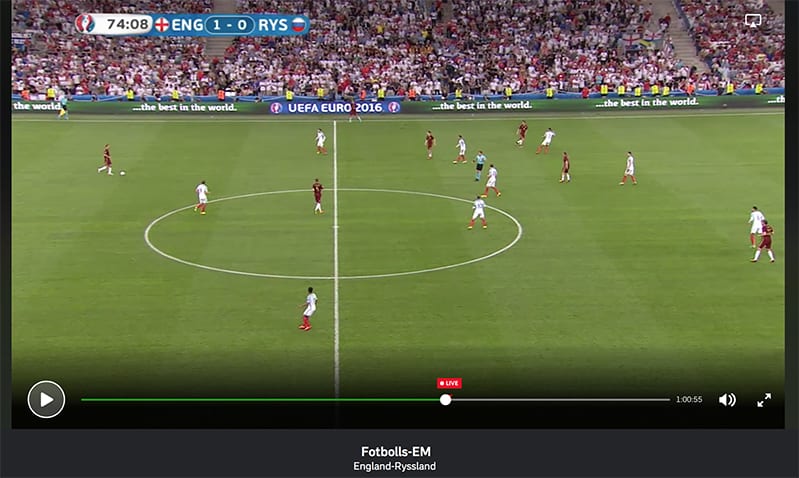 It was Uefa and Marseille’s job to be ready for the game, but both were patently unprepared…”

Football is not for hooligans and thugs. No question about it. And no question about this fact either: alcohol does NOT cause violence. But it is also high-time for UEFA and other football governing bodies and associations, and for our politicians and decision-makers to end the romance with alcohol companies.

The alcohol norm in football is perverse. Together with the pervasive alcohol marketing it fuels violence. Let’s call it what it is: UEFA (and others) have to quit putting their profits over the well-being of children and families, fans and football itself. The events these days involving alcohol fueled violence should cause an urgent disqualification warning to Carlsberg as well.

Like at the Fifa World Cup in Brazil, where violence erupted, after alcohol sales were re-introduced, EURO 2016 is sadly another example where we can clearly see that the alcohol norm needs to be disqualified.

to help end the harmful practices of the alcohol industry in football, click here: #OutbidChang