A new Alcohol Control Bill has been drafted by a small committee chaired by Betty Nambooze, a member of parliament (MP) to be presented as a private members bill. This is a truly historic and ground-breaking process in my country. Since 1962 when the first Alcohol law was drafted and passed into law as the British Colonialists were existing Uganda, nothing on this scale has been done in Uganda to control alcohol. Most actions by the government have been piecemeal work especially concerning alcohol taxation. And so obviously the impact of these measures has been very minimum in the last decades…

A new Alcohol Control Bill has been drafted by a small committee chaired by Betty Nambooze, a member of parliament (MP) to be presented as a private members bill. This is a truly historic and ground-breaking process in my country. Since 1962 when the first Alcohol law was drafted and passed into law as the British Colonialists were existing Uganda, nothing on this scale has been done in Uganda to control alcohol. Most actions by the government have been piecemeal work especially concerning alcohol taxation. And so obviously the impact of these measures has been very minimum in the last decades.

Uganda is a low resource developing country. It has gone through a lot of political turmoil in the last 54 years of Independence:

Mind you, in all these alcohol has been at the centre stage but the successive governments have taken a blind eye concerning the negative consequences of alcohol.

Alcohol a massive obstacle to development in Uganda

In March 2013, a CNN study ranked Uganda 8th in the world and first on the African continent in liquor intake.

The Daily Monitor quoted President Museveni stating that alcohol kills young people’s innovativeness. The President expressed concern over the prevalent alcohol use of young Ugandans and said that alcohol causes premature death – calling it slow suicide.  Our research as UYDEL in collaboration with Georgia State University (GSU) between 2013-2015 in urban slums of Kampala, also demonstrated high levels of alcohol use among youth. 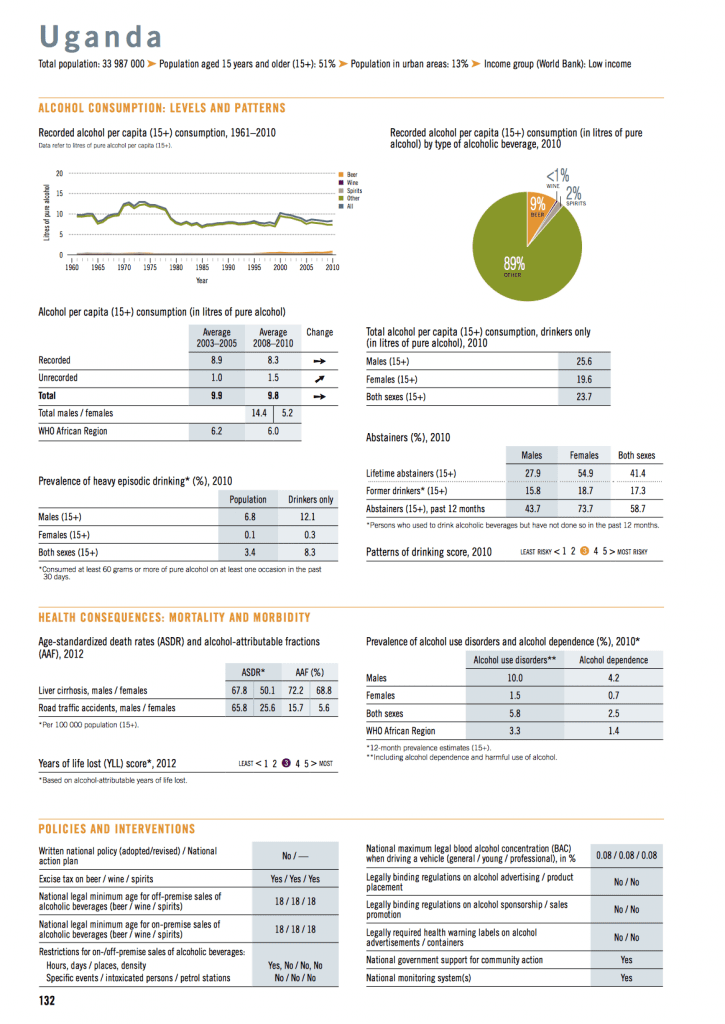 WHO Global Status Report on Alcohol 2014

A key issue for Uganda is that the alcohol industry has targeted children and young people through the proliferation and packaging of alcohol tot packs/ sachets in lowest quantities of 30mls and cheap pricing of about Ugx 200. This distribution strategy makes alcohol very cheap, easy to conceal, and accessible to minors. Consequently, young people (10-24 years) are increasingly getting hooked on alcohol which hinders their ability to attend school and to be employed.

Additionally, massive alcohol marketing campaigns are going on – including giant billboards next to roads, near schools and kindergartens. All this comes at a price for the people in my country and our society.

As such, early onset of alcohol use by adolescents poses huge economic costs to Uganda society, especially if we also factor in alcohol-related harm such as injuries and deaths due to violence, traffic accidents, and HIV transmissions as well as deaths due to alcohol poisoning.

Unfortunately, children have been targeted by the alcohol industry through extensive marketing on television and radio programs, in magazines and newspapers and on outdoor advertising, public places such as supermarkets, markets, road side promotions with free distribution of alcohol in public places and social events, and placing alcohol billboards near schools. This calls for better regulation that protect children and youth from unethical advertising, and marketing of alcohol as well as better enforcement of the minimum legal age for alcohol use of 18 years.

Research by Professor Swahn and UYDEL in 2014 shows that only 17% of youth in the slums, ages 12 to 18, find it difficult to purchase alcohol despite the minimum legal age of 18 years. The research also shows that nearly half of the youth report seeing alcohol adverts often (44%) and that they see ads in the city, on television, on radio and in newspapers and/ or magazines. More importantly, as many as 18% report getting free alcohol as part of promotional activities and as many as 20% report having items with an alcohol brand logo on it. Also, despite the mandated alcohol warning on the advertisements, our inventory of alcohol marketing in the slums of Kampala shows that as many as 25% of the marketing materials do not have any health warning.

These findings demonstrate that youth ages 12 to 18 years are clearly targeted in marketing practices and that the alcohol industry frequently violate the regulations that are intended to protect youth. Unregulated alcohol sends the wrong message to the nation’s youth, children and fear; it will lead to serious public health and social problems. Our children will be worse with unregulated alcohol environment.

The burden of alcohol harm

Uganda needs to understand the burden of the economic costs of alcohol. When people use alcohol more it affects the economic productivity of individuals which in turn implies less productive work, fewer savings and scarcer household resources; it also means less productive workplaces with higher risk of accidents and injuries; all that means that alcohol burden communities and our country at large with social and economic harm that drain our scarce resources and lead to less investments in the country thus fueling the vicious cycle of poverty, violence, food shortage and crime.

Treatment costs rise in hospitals (as more that 200 diseases are associated with the use of alcohol) and large sums of money are spent on individuals during hospitalization, rehabilitation and treatment of people with alcohol use disorders and as well as victims of alcohol’s harm to others than the users themselves, such as road traffic fatalities, victims of violence etc. The police cost, judiciary and enforcement costs go up and money which would rather be invested in education, economy and health is taken up to police alcohol related crimes.

Most of the laws on alcohol consumption and abuse in Uganda were enacted a long time ago, in 1965.  These need to be revised and consolidated for them to apply as any kind of deterrent for the many alcohol related crimes.

The new law needs to be pragmatic about the proposed areas for regulation and enforcement of alcohol production, sale and consumption in Uganda.

I think that specifically the following areas need to be strengthened:

The Ministry of Trade, Industry and Cooperatives should fast track the development of the alcohol policy in cooperation with the Ministry of Health and other relevant sectors. The policy should consider the WHO Global Alcohol Strategy.

The impact of these policy changes and enforcement of existing laws will have a profound impact on the health and well-being of our children and youth and ensure economic viability of future generations.  The bill should not criminalize alcohol use but guide the population and protect minors from alcohol.

I’m looking forward to debating the new bill and its content, without emotional overtones but instead examining the costs of alcohol harm to individuals, families, communities and our society at large.

4 comments on “Uganda And The New Alcohol Control Bill 2016”