by Kristina Sperkova Posted on October 17, 2016 in
Alcohol's Harm To Others, Obstacle To Development, Sustainable Development

Poverty is not merely material deprivation; poverty is more than lack of income; poverty is more than the absence of resources needed for material well-being — such as food, housing, land, and other assets. Poverty has multiple dimensions. Analyzing poverty through the lens of alcohol harm offers important insights for how to end poverty sustainably and comprehensively…

The vicious cycle of poverty

The United Nations Sustainable Development Goal to “end poverty in all its forms everywhere” explicitly recognizes that poverty results not just from the absence of material resources. Poverty results from a complex mix of many different interrelated factors affecting the lives of poor people and communities. In this complex mix, alcohol is often found to be fueling the vicious cycle of poverty.

Poverty is not merely material deprivation; poverty is more than lack of income; poverty is more than the absence of resources needed for material well-being — such as food, housing, land, and other assets. Poverty has multiple dimensions. Analyzing poverty through the lens of alcohol harm offers important insights for how to end poverty sustainably and comprehensively.

Poverty is in many ways connected to alcohol and impacts all levels from individuals and families to communities and societies in general:

The costs of alcohol harm in LMIC erode society’s ability to build and invest in a system that could potentially mitigate some of the worst consequences of alcohol harm.

Ending poverty in all its forms

Alcohol harm in the global south is undermine the resilience of communities and it thus eroding societies’ capacity to end poverty.

To summarize these 7 pathways that I outlined above, one infographic is useful. It shows and visualizes how alcohol harm creates obstacles for achieving the Sustainable Development Goals and undermines communities’ and societies’ resilience to overcome poverty.

The Secretary-General of the United Nations, Ban Ki-moon, says:

Today, some 1 billion people live in extreme poverty and more than 800 million endure hunger and malnutrition.

But poverty is not simply measured by inadequate income. It is manifested in restricted access to health, education and other essential services and, too often, by the denial or abuse of other fundamental human rights.”

Above, I’ve outlined how alcohol harm poses a heavy burden on these aspects that Ban Ki-moon talks about: health, education, Human Rights. Poverty in all its forms can thus only be ended, if alcohol harm is being addressed systematically and comprehensively.

Poverty is a massive problem – complex, multi-faceted, and often entrenched over generations. But we also do know which public policy measures work for helping to end poverty. That’s the good message. 12 out of the 17 SDGs are negatively affected by alcohol. There 7 seven connections how alcohol causes poverty. But evidence-based alcohol policy measures do exist to help end poverty.

The three best buys in alcohol policy have proven potential, as our report shows: 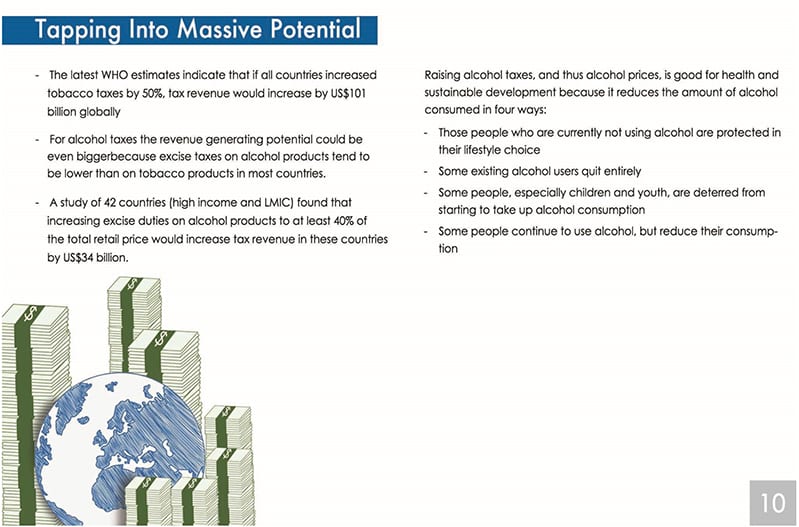 To be clear, alcohol taxation and the other best buys are not magic measures. For all their benefits and cost-effectiveness we also need to be aware of the fact that in countries with low prevalence of alcohol use or with high proportion of consumed alcohol produced informally or illegally and, therefore, not covered by taxation, the cost-effectiveness of raising taxes on alcohol is less favorable.

In a world, where poverty stems from complex and interrelated factors affecting the lives of poor people and communities, alcohol policy interventions hold crucial potential. As alcohol is fueling the vicious cycle of poverty, the people who are suffering the most from alcohol harm need to be part of the solution. It’s the affected people and communities themselves, that are the best agents for change. It is them that experience and endure the reality of what I call the seven connections of how alcohol causes poverty. They know it – and empowering them to become advocates for change driven by policy is already a milestone in our global-local efforts to end poverty for good.