by Julie Dostal Posted on November 10, 2016 in
Alcohol Industry, Alcohol's Harm To Others, Corporate Consumption Complex

About six months ago, AB InBev – the world’s largest beer producer and maker of Budweiser – decided that their latest and greatest marketing strategy would be to brand their best-known beer with a temporary name that was designed to illicit patriotism and increase sales. With the “most patriotic summer” in the books, this is my “America” epitaph…

About six months ago, AB InBev – the world’s largest beer producer and maker of Budweiser – decided that their latest and greatest marketing strategy would be to brand their best-known beer with a temporary name that was designed to illicit patriotism and increase sales. With the “most patriotic summer” in the books, this is my “America” epitaph.

By way of explanation, an executive declared that, with the upcoming Centennial Copa America, and the Summer Olympics, and, of course, the Presidential campaign, ‘we are embarking on what should be the most patriotic summer that this generation has ever seen.’ (There were, after all, both an election and an Olympics just four summers ago, and four summers before that.)”

For Big Alcohol nothing’s off limits

Unfortunately for Budweiser, in changing the beer’s name to “America,” the company (and the brand) appears to have become the equal opportunity offender. For those Americans who are not happy with the current state of the nation, anything with a ring of overt patriotism is off-putting. For the baseball, apple pie, red-white-and-blue Americans, anything that gratuitously attempts to capitalize on their national pride is met with disdain. And to top it all off, the irony of a Belgium-based beer company naming its flagship product “America” was lost on no one.

There is so much wrong with this particular marketing strategy that I am grateful it was such a smashing failure. BrandIndex reports that the “Consideration to Purchase” indicator dropped precipitously within one week after the product became available. The same indicator actually ended up lower than it was before “America” was announced. Additionally, Budweiser’s overall ad awareness peaked during the initial introduction of America, but, like other indicators, dropped significantly for the beer giant.

It is interesting to read the post-mortem articles about what happened to the “America” brand. Business Insider actually calls the campaign a “flop” and speaks of the failed attempt to capture the business of millennials. (C’mon AB InBev… we know that millennials are too smart and too media savvy to fall for a simple name change and a waving flag.) 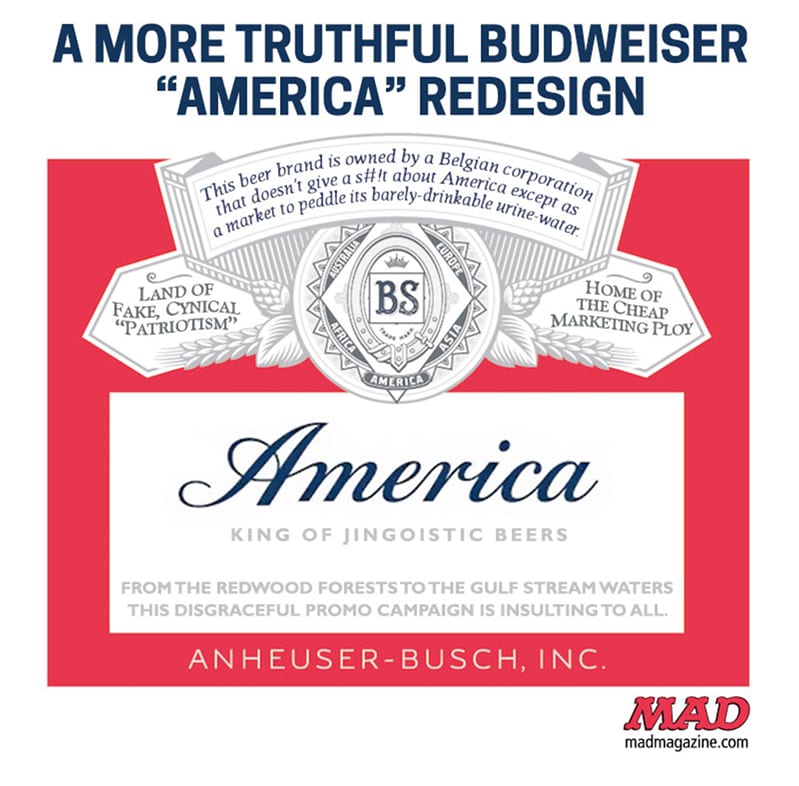 The “Money” section on time.com reports on the demise of the name change and concludes with an astute tongue in cheek observation that AB-InBev is not American, but is a multinational conglomerate with this reference: “There Are Easily 20,000 Beers More American Than Budweiser’s ‘America‘”

Even though the “America” brand has now died an untimely death, this will not be the last attempt of the largest beer producer on earth to sway alcohol consumption habits through emotional marketing.

As I prepare to teach this evening’s college class on the marketing practices of beer companies, I will go through a litany of puppies, ponies, sappy songs, pretty ladies and patriotic images. AB InBev will continue to try to influence millennials and target youth because they are the potential profitable heavy alcohol users of tomorrow. They will also try to influence you.

AB InBev does not and will not admit that their product (alcohol) causes more damage and more harm than any other product commercially available for consumption. The public won this particular round by voting with their dollar. We can only hope future attempts to gobble up more alcohol users into the AB InBev fold will be just as clumsy.

Get to know Julie

Hi and warm welcome to my blog corner!
I am Julie Dostal, wife, aunt, dog mom (I promise not to post pictures of my dog… yet), sister, niece, runner, hiker, kayaker, photographer, musician, teacher, trainer, Psychologist, and woman in long term recovery. Although it is probably my recovery that brought me to the field of addiction, it is likely the other parts of my life that kept me here.
I have worked on all sides of the addiction and mental health continuum, including crisis intervention at the local hospital. it seemed that there must be something that might help people to never have to experience such circumstances in the first place. Intervention was rewarding, but prevention called to me.

Other recent posts by Julie Dostal