In 2015, Kenya leaped from low-income to lower-middle income status. But the increasing burden of NCDs and alcohol harm make up a massive obstacle to continued development. Fortunately, science provides clear evidence about what can be done and what is effective to promote health and boost development in Kenya…

In 2015, Kenya leaped from low-income to lower-middle income status. This was as a result of the government’s growth and transformation strategy that focused on three pillars namely, the political, social and economic sectors. The country is expected to reach double-digit economic growth in the next few years.

Increasing NCDs burden is an obstacle to development

However, this growth is likely to be reversed by the nation’s disease burden which is in a transition from infectious to Non-Communicable Diseases (NCDs). These diseases are often chronic and increase household costs for treatment driving communities into poverty. 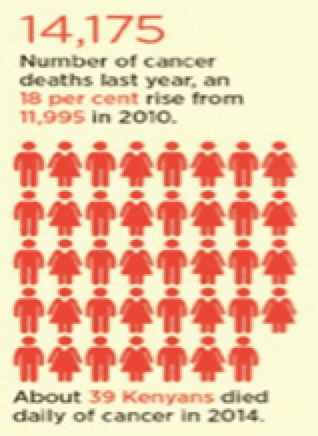 Courtesy of the Nation Newspaper (Newsplex)

The last ten years, Kenya has recorded an increase in NCDs related mortality. Further, half of all hospital admissions are attributable to these diseases. This comes before the backdrop of a health care system that is still grappling with the impact of HIV.

While NCDs as a category cover a broad range of diseases, Cancer and Cardiovascular disease have been singled out as being the biggest killers in the country.

Cancer alone accounts for 39 pre-mature deaths per day which translate to close to 19,000 deaths annually. As a way of responding to this crisis, the government will set up an additional four centers to avail affordable cancer treatment across the country.

The major risk factors associated with cancer include (but are not limited to):

Early this year Kenya’s largest Referral hospital – Kenyatta National Hospital – raised an alarm over the increase of diagnosis of the throat (esophagus) cancer in Western Kenya. This was largely linked to consumption of Changaa (traditional spirit).

Alcohol is a major risk factor in Kenya

Alcohol use has serious health and social effects making its prevention and control a public health priority. According to a report published by NACADA in 2014, alcohol-attributable deaths accounted for an average of 4.5 % of all deaths in Kenya between 2010-2012. Cancer was the leading cause of these deaths. 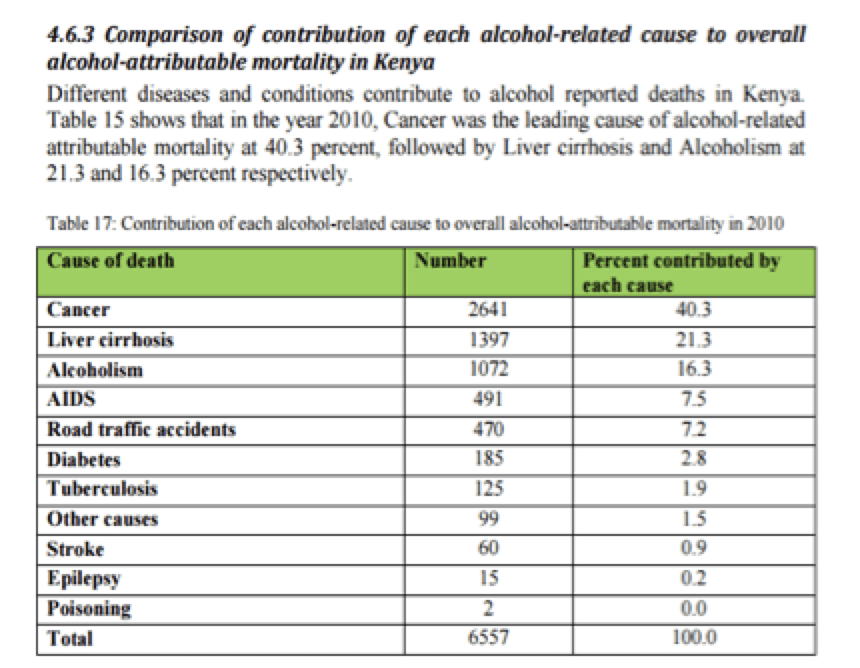 NACADA report on morbidity and mortality from alcohol consumption, May 2014

Recent media reports point towards an increase in the prevalence of alcohol abuse among the nation’s youth. This puts Kenya in a bad position with regard to stemming alcohol-induced NCDs and mental disorders.

We know what works and what doesn’t work

High-income countries have grappled with the NCDs epidemic longer. Their experience demonstrates that adoption of a comprehensive approach is key in tackling this epidemic.

Such an approach has to focus on reducing risk factors associated with these chronic diseases. Given that these factors are largely behavioral, institutions have adopted awareness creation as one of its strategies. The hope has been that the population will modify their lifestyle choices so as to reduce their vulnerability to developing these diseases.

However, in the face of aggressive marketing and promotion by the tobacco, food and alcohol Industries, implementing an education strategy in isolation will not succeed – the evidence is clear about that, too. There is a need for governments to proscribe or regulate particular policy measures that address availability, affordability, and marketing – the so-called three best buys.

Kenya’s Tobacco control journey is a good example of how policies can make a significant contribution to the prevention and reduction of NCDs. The country enjoys a relatively low prevalence of tobacco use especially among young people in comparison to our neighbors. This is largely credited to the tobacco control programs implemented under the Tobacco Control Act.

Greater emphasis should, however, be placed on increasing engagement between Government and Civil Society Organizations involved in advocacy campaigns. There is a perception in the country that Alcohol control is the sole domain of NACADA and this may have cowed other critical partners from making their contribution. The WHO Global Strategy to reduce Alcohol Harm in Africa calls for a coordinated multi-sectoral engagement so as to achieve desired results. Technical and political leadership from NACADA and the CSOs will play a major role in

Get to know Adrian

Jambo! Welcome to my blog!

I feel extremely privileged to be part of this global conversation about Alcohol Control.
I am passionate about creating a positive environment that allows young people to enjoy a high quality of life free from the influences of alcohol and other drugs.
I will be sharing my unique experiences and reflections drawn from working with communities and relevant state actors engaged in Alcohol Control. I am currently working with Kenya’s Alcohol and Drug Abuse Prevention Authority (NACADA) and I am also a founding member of The Kenya Alcohol Policy Alliance (KAPA).
I hope you will find this blog informative and I look forward to hearing your feedback and remarks.
Ashe (Thank you)!

Other recent posts by Adrian Njenga