Many people at CSW are talking about breaking norms but fewer are ready to tackle norms that we, according to the evidence, do not benefit from. The alcohol norm is incredibly harmful to women and girls. My questions remains: why is the feminist movement so comfortable with it?

It’s been one month since I returned from the 61st session of the Commission on the Status of Women – CSW61. CSW is an annual event. It is an inter-governmental body meeting in New York every March to follow up on the United Nations Member States’ work on promotion of gender equality and empowerment of women.

As organization IOGT International is 166 years old and from the very beginning it has valued all people equally and worked for equal opportunities for both men and women. Alcohol harm pervades the policy area of women’s empowerment and gender equality. Gender-based violence is often alcohol related. Alcohol functions as a triggering or enabling factor and an excuse for violence. The alcohol industry glides on the wave of emancipation and promotes their products as vehicles to more freedom and equality for women and at the same time through their advertising it maintains traditional gender stereotypes by perpetuating objectification and sexualisation of women.

CSW61 took place between March 14 and 24 and IOGT International was represented again. Together with the government of Botswana, the United Nations Development Program and Prof Monica Swahn of Georgia State University, we arranged a side event that would show what kind of measures countries can take to eliminate violence against women cost-effectively and sustainably.

Evidence shows that to eliminate violence against women there are several factors proven to have an impact:

According to the World Health Organisation, when working on these five areas, there is a high probability that violence against women will be significantly reduced.

Harmful alcohol use stands here as a separate area which is a positive sign that alcohol use is recognized as a major risk factor contributing to violence against women. When looking at the other four areas, I can’t but associate alcohol use to all four because our alcohol culture fuels negative developments in all of them.

It might be of interest and it is definitely worth mentioning that reduction of alcohol use has a stronger and more coherent impact than economic empowerment, which is very complex and sometimes leads to the opposite – increased violence. The reason for that is a strong challenge to power relations demonstrated in gender-based differences in wealth, right to own land and property, financial independence etc. While population targeting measures of reduction of alcohol use such brief interventions, structural changes (e.g. alcohol price or alcohol outlet density) and treatment of alcohol addiction will reduce and prevent occurrences of violence – especially intimate partner violence. That is a fact. It is less personal and affects the broader public.

As I’ve mentioned already, the presence of alcohol in connection to all the other areas listed above is not negligible either.  Let’s take them one by one.

Alcohol and exposure to violence in childhood

As the picture below shows child abuse and neglect are often alcohol related. There’s a clear link between alcohol and exposure to violence in childhood. Moreover, when children witness violence at home, they are more likely to grow up into violent adults. Domestic violence is as well highly associated with alcohol use and reduction of alcohol use reduces the exposure of children to violence.

I have already written about women’s economic empowerment but I would like to ponder that topic for a little longer. The alcohol industry has started targeting women as soon as their purchasing power started increasing. The onslaught of alcohol marketing targeting women is already having massive negative consequences for women’s health and empowerment.

Women metabolize alcohol differently from men and the same amount of alcohol is more harmful to women than men. The health consequences often lead to higher expenditures for women.

In addition to that, due to the stigma about women’s alcohol use and addiction, the help adjusted to women’s needs is often absent. As Maik writes in his blog post “Attack On Women”, it has become clear that Big Alcohol preys on the economic empowerment of women. The consequences are severe for women:

All that leads to greater health inequalities between men and women with extensive economical impact.

If we look at the economic empowerment from the perspective of getting income, there are many women in developing countries who have to try and make a living from alcohol production and sale. These women are often exposed to violence from their customers due to the enabling character of the substance and the environment where the informal alcohol is being sold.

Regarding the legal and justice system interventions, there are two main mechanisms at work.

Alcohol serves in many countries as mitigating circumstance in court trials and in general in people’s minds. So even if the system interventions are in place, many women do not report assaults from their partners when the partners were under the influence of alcohol. The reason is that they excuse the violent behavior and consider it an exception from the men’s usual behavior despite its repeating character.  In many communities, alcohol related violence is such a normal phenomena that they do not even consider that it is a man-made occurrence (and thus can be changed) and not a law of nature. 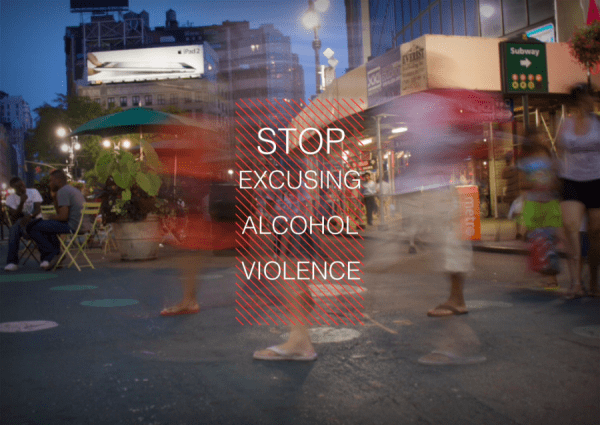 Last (intentionally) but not least are the norms and beliefs that are often reinforced by alcohol culture especially alcohol marketing.

Not only the commercial sphere but the general public as well is promoting traditional gender stereotypes and roles through expected alcohol consumption patterns that differ between men and women. Every culture has “prescribed” how much, when, how and even why women and men should use alcohol. This kind of prescribed behavior helps people strengthen or express their gender identity or rebel against it.

Certain patterns of alcohol use also lead to certain types of behavior depending on the context. They can lead to cheerful mood, violent behavior, social withdrawal, and emotional outbursts. The broad variety of reactions clearly shows that the results of alcohol use are not based on alcohol’s chemical reactions in the body (cause it would be always the same) but on prescribed and learned chains of behavior generated in our minds based on expectations we have around alcohol’s influence on us. And this brings me back to the norms and the change of them. The easiest way to change norms is to limit the factors that contribute to their prevalence because only absence of those factors will show the non-existent relation between them and the expected outcomes.

For example to create alcohol free spaces is essential for people to understand that it is them who posses the key to fun, attractiveness, latest dancing moves or courage. By not having alcohol free environments we deprive people of experiencing themselves and only offer prescribed patterns of behavior.

By creating environments that lead to reduced alcohol use, we are as well creating environments with reduced violence. Because of that simple notion, I believe that alcohol policy is a women’s rights issue and I would love to see more women’s rights organisations advocating for evidence-based alcohol policy measuers that reduce alcohol consumption.

A question for the feminist movement

I am always grateful to be at CSW, to take part in the dedication and drive that I have experienced only in the women’s rights movements and among environmental activists. It is inspiring and encouraging. It gives hope and energy.

This movement has accomplished a lot despite constant struggles and set backs. At the same time I would expect more enthusiasm for measures that we know (!!!) are working to eliminate violence against women. Alcohol policy measures are not the usual ones the women’s rights community has advocated for and thinks of when wanting a change. But they are actually simple, cost less than many other interventions and bring a great effect.

Many people at CSW are talking about breaking norms but fewer are ready to tackle norms that we, according to the evidence, do not benefit from. The alcohol norm is incredibly harmful to women and girls. My questions remains: why is the feminist movement so comfortable with it?