There is an increasing amount of marketing campaigns disguised as philanthropic initiatives being undertaken by global alcohol corporations in an effort to endear themselves with the people and (more importantly) with the politicians, and increase alcohol consumption in Africa. This is deeply problematic for many reasons…

Beer for profit thirst, not against hunger

There is an increasing amount of marketing campaigns disguised as philanthropic initiatives being undertaken by global alcohol corporations in an effort to endear themselves with the people and (more importantly) with the politicians, and increase alcohol consumption in Africa.

One such initiative is the Beers for Africa 8-pack campaign by South African Breweries (SAB) in collaboration with Stop Hunger Now Southern Africa (SHNSA) – a charity organization which packs and distributes meals to feed hungry children and people living in poverty. Through their Beers for Africa 8-pack – consisting of beers from Botswana, Lesotho, Mozambique and South Africa, Tanzania and Zimbabwe – the brewer claims it is helping address hunger in Africa by selling the beer 8-pack to raise funds to feed hungry university students.

Helping the students is a welcome initiative. However, the way they are raising the money is unethical and a cause for concern.

Alcohol is an obstacle to development

SAB is encouraging people to buy their 8‐packs, with the message that: “the more beer you buy, the more money we give to hungry students”. It is a widely known fact, however, that heavy alcohol use and the resulting alcohol related harm represent a substantial impediment to development by exacerbating already existing social problems and poverty in Africa. In the booklet Alcohol and Development published by Campaign for Development and Solidarity (FORUT), Dag Endal highlights how use of alcohol is a risk factor for several of the most important development challenges, such as poverty, gender-based violence, child rights violations, health problems and lack of education.

In light of the above facts and in the interest of public health, civil society and policy-makers in Africa should be concerned about partnerships like the one forged between SAB and SHNSA.

SAB has ingenuously chosen and hijacked a topic close to people’s heart – hunger and children – to promote itself as a responsible company that wants to make a positive contribution to society. If the brewer is sincere in their motives, they should stop promoting the sale of their “Beers for Africa” 8-pack as a vehicle for raising funds for poverty alleviation.

If they are sincere in their motives, the must follow the words of Nelson Mandela:

There can be no greater gift than giving one’s time and energy to help other without expecting anything in return.”

They are obviously free to sell their 8-pack, but not advertised under the banner of charity.

If the company is serious about their support for students, they should be willing to make their donations from their already extensive profits without linking it to the sale of a product and, indeed, without linking their contribution directly back to the company.

In my opinion, they should ideally contribute by paying their fair share of taxes, instead of scheming to avoid paying taxes – as a report found SAB guilty of. In the current situation, multinational alcohol corporations like SAB are externalizing the costs for their products while they rake in profits, leaving society behind in the struggle to deal with the massive burden of alcohol harm.

It is also important to note that Anheuser-Busch InBev (AB InBev) which bought SAB, has not made a secret about its expansion plans in Africa which will no doubt be pursued with aggressive tactics in political lobbying and marketing activity. The brewer has upsized beer packs for various African brands from the standard six-pack to an eight-pack of which the beers for Africa 8-pack is one such initiative. In addition, the brewer has converted the 440ml cans of all its mainstream beers in South Africa into 500ml cans. Behind the altruism, one can clearly observe an aggressive profit-oriented business motive.

Charles Parry and Karen Hofman in an article “Big alcohol is poised to expand into Africa. Why this is bad news for health”, note:

Sub-Saharan Africa provides particularly fertile ground for growing market share due to the high proportion of the population in many countries who don’t yet consume alcohol (especially among females), the high youth population in most countries, and the growth in GDP in certain countries.

Low advertising costs, weak regulation, high-intensity consumption of beer in these markets make for an ideal environment for global brands.” 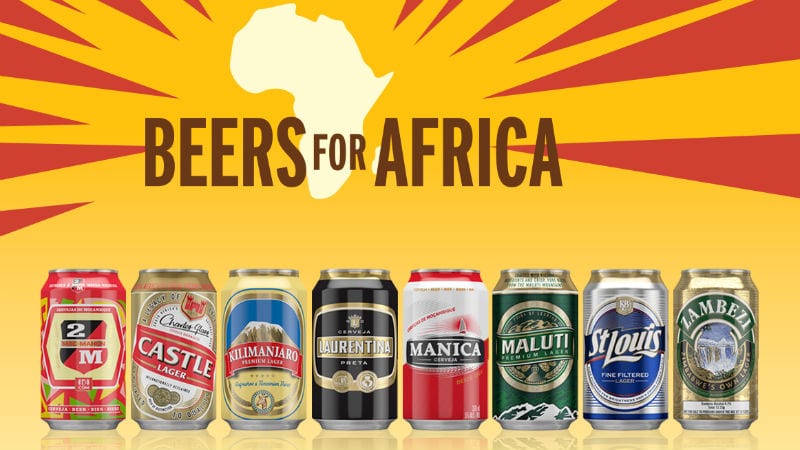 Research has also revealed how global alcohol corporations undertake philanthropic sponsorships as a means of indirect brand marketing as well as gaining preferential access to emerging alcohol markets like Africa.

African citizens especially the youth should be protected from the predatory practices of Big Alcohol whose aim is to get as many of them to begin consuming alcohol as young as possible and to keep them as life-long customers.

The increasing penetration and involvement of the alcohol industry into philanthropy highlights the urgent need for collective global action and a regulatory framework to safeguard public health and sustainable development in response to the behaviour and practices of transnational alcohol corporations. More important, there is need for aggressive social marketing efforts that highlight the negative effects of alcohol consumption without moral overtones.