Diageo is not an ordinary company. This is not an ordinary CEO. Spinning the truth until it becomes a lie is not normal, even if it is standard in the alcohol industry. Diageo’s products are not ordinary commodities but harmful for individuals, families, communities and societies at large. Apparently Diageo is intent on evading responsibility, rather burdening society with paying the costs for the harms its products and marketing cause, instead of acting responsibly and ethically…

Big Alcohol is externalizing costs of their products and marketing

Alcohol harm is pervasive and costly, affecting all countries at staggering rates.

To my mind these figures are astronomical. It’s difficult to put these sums in context. One thing is clear is: alcohol-related harm puts a massive burden on people and societies around the world.

Alcohol taxation is the most cost-effective and high-impact public health strategy to prevent and reduce alcohol harm. Another important purpose of alcohol taxes is to generate revenue for governments to compensate for the costs borne by health services, policing and justice systems as a result of alcohol related crime, injury and ill health.

Sadly, only few countries currently set their alcohol tax rates at levels that compensate for the fiscal costs of alcohol harm to their respective communities. The reason: Big Alcohol lobbies aggressively against public policy measures that would effectively reduce alcohol use and related harm.

A remarkable example was Hongkong in 2008, when it removed all taxation on beer and wine. Scientific analysis of the policy showed:

… the success of aggressive industry lobbying coupled with the absence of robust public health advocacy was the main driving force behind the unparalleled abolition of wine and beer duties in Hong Kong.

This is a schizophrenic situation: On the other hand, Big Alcohol executives do everything possible to avoid and even evade paying taxes; they do whatever possible to stifle attempts for raising alcohol taxation. On the other hand alcohol industry executives claim they are responsible actors paying their fair share of taxes and making contributions to society.

Another example is Australia where Diageo received a tax refund of $506,000 in 2015, despite making a profit of more than $12 million.

Big Alcohol corporations like to spin their dislike of alcohol taxation and their aggressive attempts to avoid paying taxes into tales of responsibility, accountability and transparency. One executive has now been spinning too much and got it all twisted:

Diageo CEO Ivan Menezes can be seen and heard on TV lying about his company’s tax schemes. In an interview with CNBC he was asked about an ongoing dispute with the British tax authority. Diageo allegedly shifted profits between the UK and a subsidiary in the Netherlands. The multinational corporation has been ordered to pay £107m by the UK tax authority as part of a long-running investigation into moving profit between its global businesses. 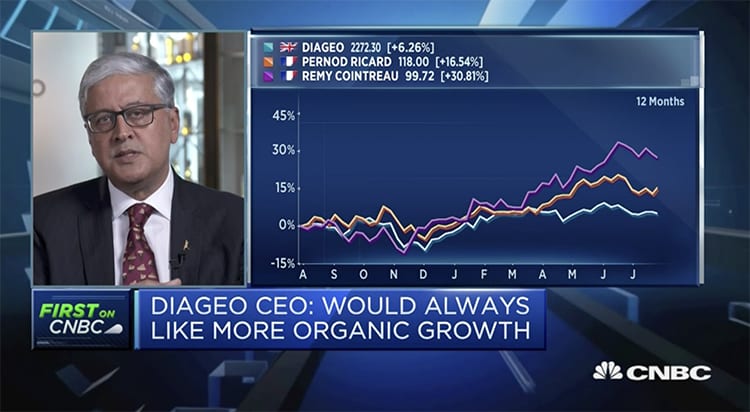 In the interview, the CNBC reporter lists figures of Diageo’s low tax rates and (quite remarkably) asks Mr Menezes whether Diageo has “been engaged in tax avoidance in recent years?”

In his stuttering reply, Mr Menezes is obviously spinning the truth too hard:

No, Diageo pays its tax everywhere in the world in line with its obligations…

We work with tax authorities around the world in a very transparent way.

We run our business with very solid operations in every jurisdiction. So our tax policies are very fair, transparent and I’m proud of Diageo’s approach to tax and the corporate tax that we pay around the world.”

A conclusion and a lesson

Diageo’s CEO says he is proud of his company’s approach to tax. I think that Diageo’s track record is nothing to be proud of.

Diageo is not an ordinary company. This is not an ordinary CEO. Spinning the truth until it becomes a lie is not normal, even if it is standard in the alcohol industry. Diageo’s products are not ordinary commodities but harmful for individuals, families, communities and societies at large. Apparently Diageo is intent on evading responsibility, rather burdening society with paying the costs for the harms its products and marketing cause, instead of acting responsibly and ethically.

I think from this story, we learn about the important role of taxation and the harmful impacts of tax evasion, tax avoidance, tax competition and tax havens. Alcohol taxation has tremendous potential to reduce alcohol harm and to support revenue generation for health and development promotion.

We need a global tax regime that puts people first, not corporations and their executives. And we need to international cooperation on tax regulation and tax related crimes to hold corporations accountable.

Paradise Papers And Beyond: Big Alcohol Big In Tax Schemes