IOGT and KiM in Basel have successfully collected enough signatures to call for a referendum about the question whether or not to keep youth centers alcohol free.

In December 2016, the cantonal parliament – the great council – decided to abolish a law that prohibited alcohol sakes in youth centers in Basel.

That decision caused an outpouring of protest and activism, among the leaders were IOGT International member organizations IOGT Switzerland, in particular the local branch in Basel and KiM Switzerland.

The period to collect the minimum amount of signatures calling for a referendum was very short, as it covered Christmas and New Year’s holidays. The campaign only got started on January 3rd, just 18 days from the deadline.

But civil society and political decision-makers were able to come together quickly, organize well and ultimately succeeded in reaching the minimum number of 2000 signatures within only four days. Two weeks later the tally was doubled and the activists handed in 4466 signatures to call for a referendum.

The campaign has gained wide media attention in the region and received overwhelming positive feedback in discussions on the public squares in Basel. 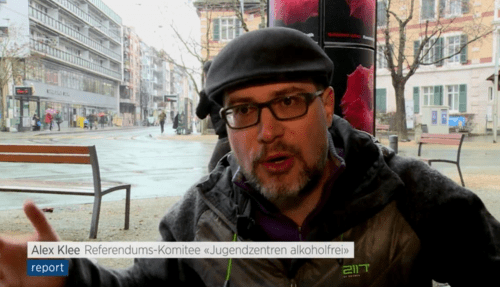 The political elites in Basel were surprised by the urgent calls for the referendum and the successful campaign. IOGT Basel played a key role in organizing the campaign and collecting the signatures forms.

There seems to be widespread support for the notion that youth centers should remain alcohol free and that young people have a right to be protected from alcohol.

The date for the referendum, however, is not public yet. Preliminarily, May 21 could be the day were the citizens of Basel decide whether to put people or alcohol first.