Posted on February 29, 2020 in
Alcohol's Harm To Others, Civil Society, Democracy, Movendi, Policy

Movendi Slovakia has published a thorough analysis of the election platforms of the major political parties that compete for votes in the 2020 parliamentary elections. The analysis entitled “Alcohol in Election Platforms” shows if and how a political party would prioritize alcohol policy solutions, how they would approach prevention and health promotion in general…

Movendi Slovakia has published a thorough analysis of the election platforms of the major political parties that compete for votes in the 2020 parliamentary elections. The analysis entitled “Alcohol in Election Platforms” shows if and how a political party would prioritize alcohol policy solutions, how they would approach prevention and health promotion in general.

On February 29, voters will elect the 150 members of Slovakia’s National Council. In 2016, the center-left populist Direction-Social Democracy (Smer-SD) party won the most votes, but is deeply mired in systemic corruption and ties with organized crime that their voter support is projected to be plummeting.

25 parties are competing for votes but likely fewer than 10 are expected to overcome the threshold of 5% of the votes required to enter parliament. Out of the 5.4 million citizens, approximately 4.4 million are eligible to vote and turnout is expected to be high, for Slovak standards.

Massive outrage and historic numbers of protests against the government, former Prime Minister Fico and an apparently corrupt system spread across Slovakia over the 2018 mafia-style murder of an investigative journalist whose stories exposed high-level corruption plaguing the eurozone country.

The murder of Jan Kuciak and his fiancee Martina Kusnirova, allegedly ordered by a businessman with deep ties to both organized crime as well as the highest levels of the political establishment, including Robert Fico, has become the lightning rod for public outrage at graft in public life, and sparked a national movement “For a Decent Slovakia” (Za slusne slovensko).

The double murder triggered the largest anti-government protests since communist times and toppled Mr. Fico as prime minister, with his party colleague Peter Pellegrini taking over the reins. It also propelled Zuzana Caputova, a social-liberal lawyer and anti-corruption activist, to win the 2019 Presidential elections.

The double murder and the ensuing protest movement have brought to light a vast and entrenched system of corruption in the judicial system, politics and business and have reconfigured the Slovak political landscape.

Where the political parties stand on alcohol prevention and control

Movendi SK’s analysis included the seven biggest parties, according to recent polls, but excluded the fascist party LSNS as well as Smer-SD.

Notably, Smer-SD has not produced an election platform at all.

The key words and concepts that the analysis looked at are: alcohol, prevention, taxation, advertising, non-communicable diseases, violence and accidents, as well as alcohol availability.

For Movendi SK it was important to understand if and how the major political parties are addressing alcohol harm at all and how the focus on prevention looks; secondly it was crucial to examine broader topics where alcohol is a major contributing factor such as cancer, domestic violence or road traffic crashes. 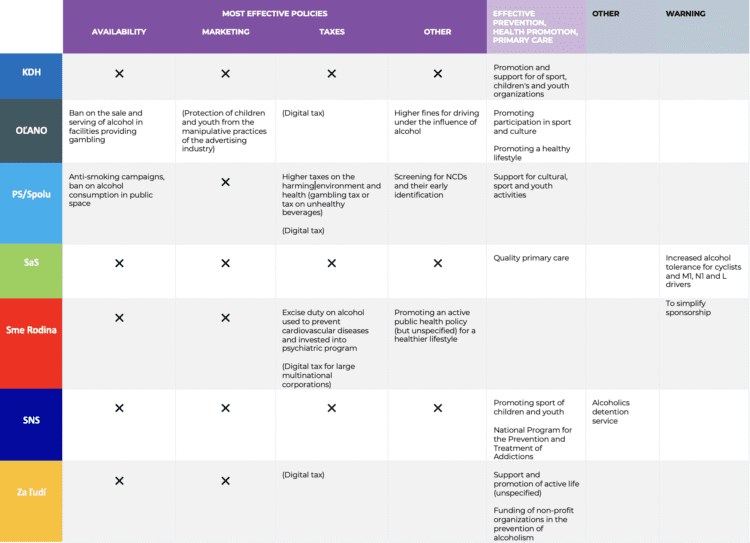 OĽANO and PS/ Together (Progressive Slovakia/ Spolu) have the best coverage of the most effective approaches to disease prevention and harm reduction through alcohol policy.

PS/ Together is the political party with the most specific measures in their election platform. They are not only paying particular attention to alcohol excise taxes, but are also outlining how they plan to use them. PS/ Together is planning to invest the revenue from alcohol taxation in those areas where alcohol causes problems.

At the same time, caution is warranted in the area of sports sponsorship. PS/ Together wants to simplify the sponsorship of sport. While this is, of course, very good and necessary, it needs to be ensured that the promotion and sponsorship of harmful products such as tobacco, alcohol, and sugar-sweetened beverages is removed from sports in Slovakia, to protect especially children and youth from the normalization and glamorization of unhealthy products and behaviors that would negate the very purpose of sports and other prevention efforts.

Another positive finding from the analysis is that almost all parties are planning to invest in youth, culture and sports – all very important for prevention and health promotion. Young people in Slovakia need quality organized leisure time, with skilled and conscious coaches, teachers, youth workers.

In their analysis, Movendi SK write:

It is quite clear that the analysis of electoral programs from the perspective of alcohol harm and policy solutions alone will not guarantee concrete action by any of the parties to actually begin solving alcohol problems in our society comprehensively and urgently.

But one thing is certain: Each party’s approach to preventing harm caused by alcohol, but also by other harmful products, speaks of their belief in society itself and their desire – or lack thereof – to create environments where the people in Slovakia not only exist, but have the opportunity to fully thrive and enjoy their lives.” 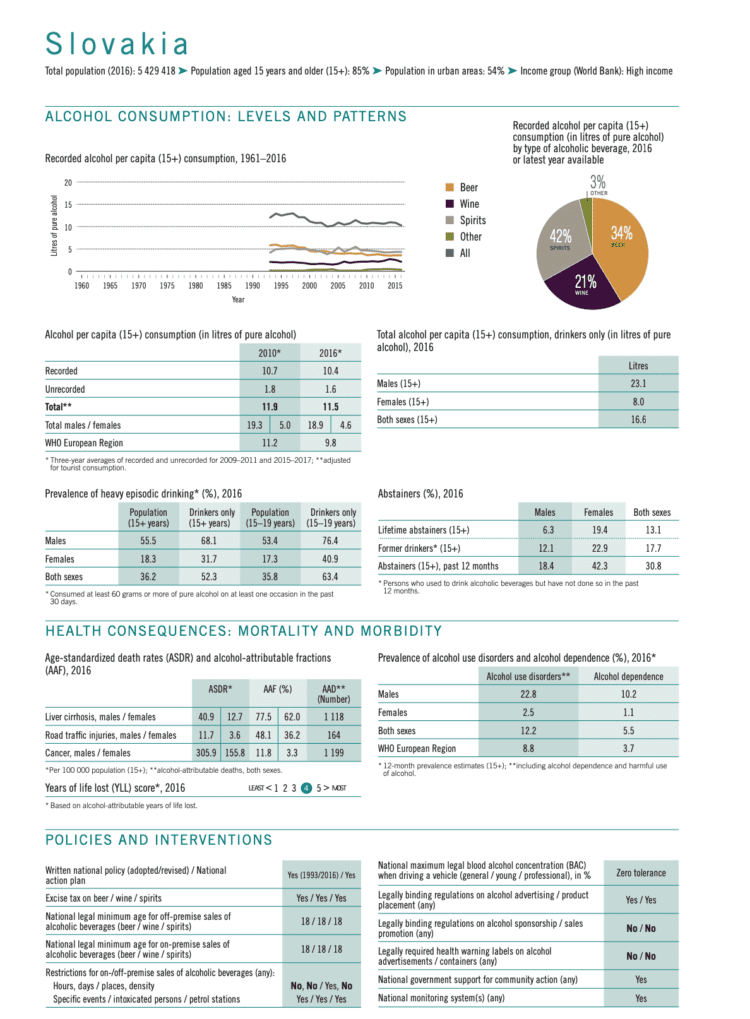 Accordingly, alcohol harm is pervasive in the country.

Recent WHO data shows that nearly a quarter of all Slovak men have an alcohol use disorder. More than 10% are alcohol dependent.

The alcohol policy system in Slovakia is weak. While some measures are in place, enforcement is a wide-spread weakness and alcohol availability as well as marketing regulations are not developed according to WHO standards.

It is clear that urgent action is needed and the analysis by Movendi SK of how the political parties intend to address alcohol harm will be a useful tool after the elections, for systematic advocacy.