The Science Digest provides continues updates about latest scientific reports, as well as a library of key scientific reports on a range of issues. In addition, the Science Hub also offers a database for key reports produced by the UN system relating to alcohol.

Movendi International strives to disseminate the latest scientific evidence and information in order to foster crucial insight in and understanding of the policy-making processes and supply decision-makers and opinion leaders with essential evidence.

We cooperate effectively with independent scientists and academia to encourage research in order to broaden the evidence-base both for understanding the effectiveness of policy measures as well as the impact of our own community interventions.

The World Health Organization (WHO) runs the Global Information System on Alcohol and Health (GISAH) which provides easy and rapid access to a wide range of alcohol-related health indicators. It is an essential tool for assessing and monitoring

GISAH is a further development of the Global Alcohol Database which has been built since 1997 by the Management of Substance Abuse team in the WHO Department of Mental Health and Substance Abuse. Data sources include government documents, national statistics, national and global surveys, WHO Global Survey on Alcohol and Health, Food and Agriculture Organization of the United Nations, other intergovernmental organizations, industry data, published scientific articles, and grey literature. 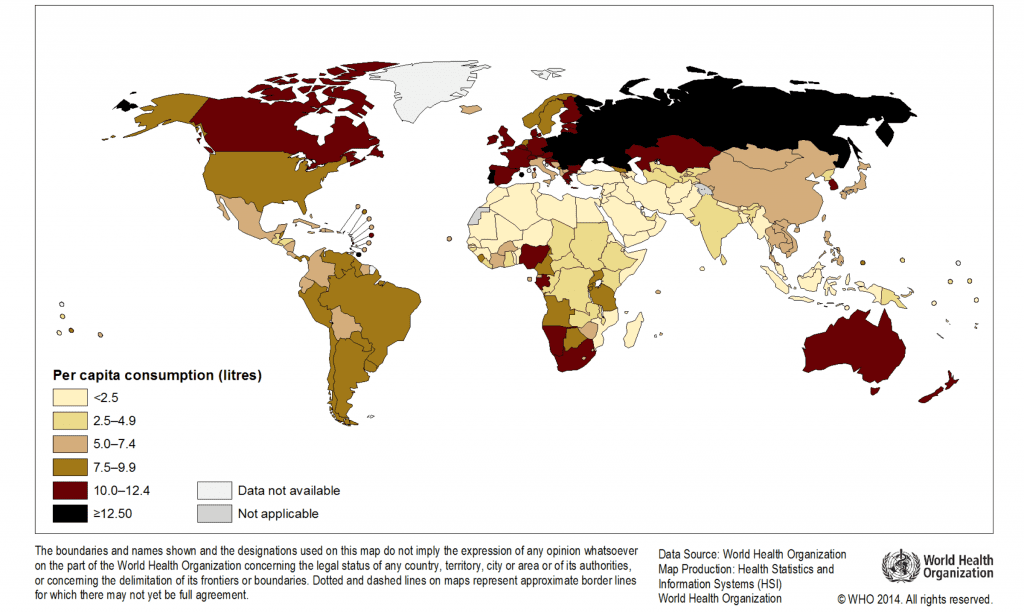 The main purpose of GISAH is to serve WHO Member States and governmental and non-governmental organizations by making alcohol-related health data available. These data can help to analyse the state of the health situation related to alcohol in a particular country, a WHO region or sub-region, or the world.

GISAH is an essential tool for assessing and monitoring the health situation and trends related to alcohol consumption, alcohol-related harm, and policy responses in countries. The harmful use of alcohol results in the death of 3.3 million people annually.

The European Information System on Alcohol and Health (EISAH)

The European Information System on Alcohol and Health (EISAH) provides easy and rapid access to a wide range of alcohol-related health statistics. This joint project of the European Commission, WHO headquarters and WHO Europe is part of GISAH (see above).

EISAH is an essential tool for assessing and monitoring the health situation and trends as related to alcohol consumption, alcohol-related harm and policy responses in countries.

A set of indicators was chosen to assess the most important aspects of the alcohol situation in WHO Member States as they relate to public health. The indicators are grouped into broad categories. Under each broad category there are “topics” and a number of “sub-topics”.

The 2015 Global Burden of Diseases, Injuries, and Risk Factors Study (GBD) is now in its 20th year.

The 2015 report is for the first time benchmarking countries based on a combination of income, education, and fertility. The 2015 GBD study reveals several surprising trends in population health, strong performance by some countries, and persistent challenges in others.

New results from the Global Burden of Disease Study 2015 examine causes of death and categorise regions according to the Socio-demographic Index (SDI).

Rethinking Development and Health: Findings from the Global Burden of Disease Study (2015),

Alcohol and Public Health in the Americas. A case for action. Washington, D.C: PAHO, 2007

   The Reage and Magnitude of Alcohol’s Harm to Others. Australia; Foundation for Alcohol Research and Education, 2nd Edition: February 2015

Status Report on Alcohol and Health in 35 European Countries 2013. WHO Regional Office for Europe, 2013

Global Status Report on Alcohol 2004. Health effects and global burden of disease. WHO, 2004

Regional Status Report on Alcohol and Health in the Americas. PAHO 2015

The role of alcohol in the global and regional burden of disease. Mats Ramstedt. 2004

Addressing the harmful use of alcohol: a guide to developing effective alcohol legislation. WHO, 2011

Alcohol in the EU. Consumption, harm and policy approaches WHO 2012

Alcohol: No Ordinary Commodity – a summary of the second edition, in Addiction, 2010

THE EFFECTS OF NORDIC ALCOHOL POLICIES: What happens to drinking and harm when alcohol controls change? by Room, NAD Publication, 2oo2

Alcohol taxation policy in Thailand: implications for other low- to middle-income countries, by Sornpaisarn, Shield and Rehm, 2011

What happened to alcohol consumption and problems in the Nordic countries when alcohol taxes were decreased and borders opened?, by Room et. al., in IJADR, 2013

How to sell alcohol? Nordic alcohol monopolies in a changing epoch, by Cisneros and Olafsdottir, 2008

Alcohol-Related Injuries: Evidence for the Prevention Paradox, by Spurling and Vinson, 2005

The association between alcohol outlet density and assaults on and around licensed premises, by Burgess and Mofett, 2011

Vested Interests in Addiction Research and Policy: The influence of industry actions on the availability of alcoholic beverages in the African region, by Babor, Robaina, Jernigan, 2015

Pleasure, Profit and Pain: Alcohol in New Zealand and the Contemporary Culture of Intoxication

Profiting from Crisis: How corporations and lawyers are scavenging profits from Europe’s crisis countries, by the Transnational Institute and Corporate Europe Observatory

Similarities in approach between Big Tobacco and Big Booze: Evidence of the “Greedy Bastard Hypothesis”?, by Ward, 2010

The concentration of the global alcohol industry and its penetration in the African Region, by Jernigan DH, Babor T., 2015

Global alcohol producers, science and policy: The case of the International Center for Alcohol Policies, by Jernigan, 2012

The extent of global alcohol marketing and its impact on youth, by Jernigan, 2010

The global alcohol industry: an overview, by Jernigan, 2009

Review:
“Trade and Public Health: The WTO, Tobacco, Alcohol and Diet by Benn McGrady”
by Estalyn Marquis, in: Berkeley Journal of International Law, 2013

Jane Kelsey, 2012
“Trade and investment law issues relating to proposed tobacco control policies to achieve an effectively smokefree New Zealand by 2025”
A report to the New Zealand Tobacco Control Research Tūranga: A programme of innovative research to halve smoking prevalence in Aotearoa/New Zealand within a decade

Curtis and Reynolds, 2015
“TTIP, ISDS and the Implications for Irish Public Health Policy”
A Report for the Irish Cancer Society

Grieshaber-Otto and Schacter, 2002
“The GATS: Impacts of ”services” treaty on health-based the international alcohol regulation”
In: NORDISK ALKOHOL- & NARKOTIKATIDSKRIFT

Parker and Alemanno, 2014
“Towards Effective Regulatory Cooperation under TTIP: A Comparative Overview of the EU and US Legislative and Regulatory Systems”
Report commissioned and financed by European Commission, DG TRADE

Gaeta and Corsinovi, 2015
“Traditional Terms and Appellation wines: debates insight of TTIP negotiation”
Paper prepared for the 145th EAAE Seminar “Intellectual Property Rights for Geographical Indications: What is at Stake in the TTIP?”

Baumberg and Anderson, 2008
“DEBATING TRADE AND HEALTH: Developing the understanding of how far world trade law affects alcohol and public health”
In: Addiction

Alcohol, health disparities and development. WHO 2006

Alcohol HIV and Violence. Vladimir Poznyak, WHO, Oslo May 2015

The hidden harm: alcohol’s impact on children and families. Foundation for Alcohol Research and Education 2015

Baseline survey on sexual and gender based violence in Rwanda UNIFEM, June 2008

Handbook for National Action Plans on Violence Against Women UNWOMEN, 2012

Global and regional estimates of violence against women: prevalence and health effects of intimate partner violence and non-partner sexual violence. WHO, 2013

Vulnerability to Alcohol and Other Drug Disorders in Rural Women Archives of Psychiatric Nursing, Vol. XVII, No. 1 (February), 2003: pp 33-41

Domestic violence in rural Uganda: evidence from a community-based study. Bulletin of the World Health Organization 2003, 81 (1)

Unhappy Hours: Alcohol and Partner Aggression in the Americas. PAHO, 2008

World Bank: On Norms & Agency. Conversations about Gender Equality with Women and Men in 20 Countries

The Lancet Special Series: Violence against women and girls. November 2014

Strengthening the enabling environment for women and girls: what is the evidence in social and structural approaches in the HIV response? Karen Hardee, Jill Gay, Melanie Croce-Galis, Amelia Peltz; 2014

Empower young women and adolescent girls: Fast-Track the end of the AIDS epidemic in Africa. UNAIDS, 2015

From Burden to “Best Buys”: Reducing the Economic Impact of Non-Communicable Diseases in Low- and Middle-Income Countries. WEF, 2011

Addressing liver disease in the UK: a blueprint for attaining excellence in health care and reducing premature mortality from lifestyle issues of excess consumption of alcohol, obesity, and viral hepatitis. The Lancet Commission

European Conference on Promotion of Mental Health and Social Inclusion

Alcohol and society: Youth and young adults. A research report from IOGT-NTO and the Swedish Society of Medicine. 2013

The impact of alcohol use disorders on family life. A review of the empirical literature. NDARC Technical Report Number:325, June 2014

The Protection of Children from Illicit Drugs – A Minimum Human Rights Standard. A Child-Centered vs. a User-Centered Drug Policy. Stephan Dahlgren & Roxana Stere

The right of the child to be protected from narcotic drugs and psychotropic substances. A Human Rights/International Law perspective. Stephan Dahlgren and Roxana Stere, May, 2010

Young people and NEETs in Europe: First findings. European Foundation for the Improvement of Living and Working Conditions

The Economic Argument for Disease Prevention: Distinguishing Between Value and Savings. A Prevention Policy Paper Commissioned by Partnership for Prevention

The economic argument for the prevention of ill‐health at population level. or Working Group on Public Health Policy Framework May 2012

Grandparents Play an Important Role in Preventing their Grandchildren from Drinking and Using Drugs. 2012 The Partnership at Drugfree.org

What have we learned from economic analyses of prevention. Louise B. Russell, PhD; Australia, March 2009

The Economics of Prevention. Research Insights, 2012