We are proud to introduce SAFER – a package of proven interventions to reduce the harms caused by alcohol, and a new partnership to catalyze global action,” said Dr Tedros Adhanom Ghebreyesus, Director-General of the World Health Organization.

We need governments to put in place effective alcohol control policy options and public policies to reduce the harmful use of alcohol.”

Health impact of alcohol use

Alcohol consumption contributes to more than 3 million deaths globally every year and over 5% of the global burden of disease and injury, according to the recently issued WHO Global Status Report (GSR) on Alcohol and Health 2018. It is also a major risk factor for NCDs, including cancers and cardiovascular diseases, communicable diseases such as TB and HIV/AIDS, violence, and injuries. Globally, alcohol consumption is the seventh leading risk factor for premature death and disability.

We have seen too little progress since the endorsement of the ‘Global strategy to reduce the harmful use of alcohol’ by the World Health Assembly eight years ago. But SAFER brings new impetus for action,” said WHO Assistant Director-General Dr Svetlana Axelrod.

We encourage countries to take action, monitor their progress, and protect alcohol policy development from interference by commercial interests. Support from civil society and donors is critical for success on alcohol control that contributes to reducing poverty, improving gender equality and improving public safety.”

SAFER: what it contains 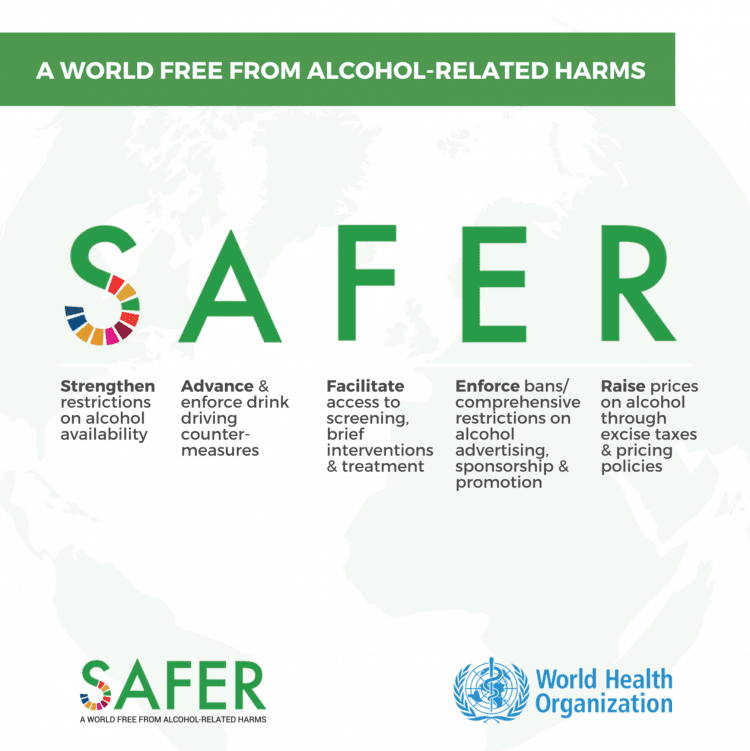 SAFER provides five high-impact strategic actions that are prioritized for implementation to promote health and development:

Action is needed to reduce the burden of alcohol-related harm in low-, middle- and high-income countries.

The scale of the alcohol challenge

Alcohol is consumed by more than half of the population in three WHO regions – the Americas, Europe and the Western Pacific. Current trends and projections point to an expected increase in global alcohol per capita consumption in the next 10 years, particularly in the South-East Asia and Western Pacific Regions and the Region of the Americas.

Almost all (95%) countries have alcohol excise taxes, but fewer than half use other price strategies such as banning below-cost selling or volume discounts. The majority of countries have some type of restriction on beer advertising, with total bans most common for television and radio but less common for the internet and social media.

Some countries have implemented and enforced policies to reduce alcohol use already. In the United States, states that increased the legal alcohol consumption age to 21 saw a 16% median decline in motor vehicle crashes. In Brazil, reducing the opening hours of bars from 24 hours a day to closure at 11 pm was associated with a 44% drop in homicides.

Multiple partners, from governments to civil society organizations, have lent their support to the new SAFER initiative.

In Sri Lanka, we are showing that alcohol control is a cost-effective and impactful tool to help promote sustainable development, including health for all,” said H.E. President of Sri Lanka, Maithripala Sirisena.

I welcome the new SAFER initiative as it has potential to make the world much safer, healthier and more prosperous.”

SAFER is a welcome and much needed initiative. The technical package to support countries will further strengthen evidence-based alcohol policy formulation and implementation. Collaboration with civil society will help move the mountain to make significant advances in reducing and preventing alcohol harm.”

The harmful use of alcohol is a major – yet often unaddressed – public health threat. SAFER provides clear guidance to governments on how to save lives on a large scale. The greatest impact will be achieved by implementing all the SAFER interventions in full.”

In communities and societies around the world, we see an urgent need for action to prevent and reduce alcohol harm. Investing in the alcohol policy best buys as packaged in SAFER is scientifically sound and economically smart, generating considerable returns on investment.”

The Global Alcohol Policy Alliance (GAPA) is very pleased to contribute to SAFER by mobilizing civil society partners around the globe. Protecting government efforts from alcohol industry influence is a crucial step in ensuring effective alcohol policies are adopted and implemented.”

With the launch of SAFER, alcohol policy finally emerges from its long hangover. Alcohol policy has not been visible on the public health decision-making table for way too long – SAFER changes that and will draw a line in the sand.

Governments now have the means to inform and protect the public around alcohol consumption, in much the same way we have seen tobacco control measures produce spectacular success in raising awareness of the harms of smoking. Too many people needlessly die or are hurt by alcohol and we are proud to support SAFER, an initiative that has the potential to save millions of lives.”

As part of the SDGs, the global community has committed to 17 goals with 169 targets. Alcohol is specifically addressed in the SDGs; target 3.5 is “Strengthen the prevention and treatment of substance abuse, including narcotic drug abuse and harmful use of alcohol.” Alcohol significantly impacts several other SDG health goals, including: reducing premature deaths from NCDs by one-third by 2030 (3.4); traffic-related mortality (3.6); and tuberculosis (3.2). Addressing alcohol-related harms would positively benefit other SDG goals, such as reducing violence against women.

About the World Health Organization

WHO directs and coordinates international health within the United Nations system. Working with its 194 Member States, WHO’s mission is to promote health, keep the world safe and serve the vulnerable. For more information about WHO, visit www.who.int. Follow WHO on Twitter and Facebook.

The World Health Organization (WHO)-led SAFER is a new initiative and technical package outlining five high-impact strategies that can help governments to reduce the harmful use of alcohol and related health, social and economic consequences.